Derick Almena to serve remainder of sentence at home

An Alameda County Superior Court judge has accepted a plea deal from Ghost Ship master tenant Derick Almena for his role in the deadly warehouse fire.

OAKLAND, Calif. - The master tenant of the cluttered, dilapidated Oakland Ghost Ship warehouse where 36 people died in a fire was sentenced on Monday, but because of good behavior and time served, the 50-year-old artist will spend no more time in custody.

Derick Almena was sentenced to 12 years, but will serve out his sentence at home with an ankle monitor rather than behind bars. He was also ordered to pay restitutions of $181,000 for funeral expenses and counseling of victims.

In January, Almena pleaded guilty to 36 counts of involuntary manslaughter. 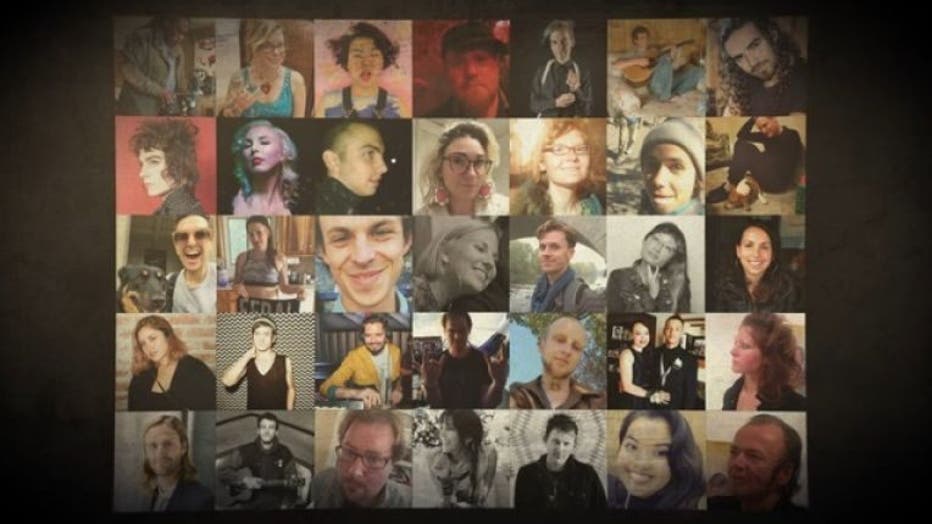 The 36 counts stem from the 36 lives lost during a house party fire in what's now infamously known as the Ghost Ship fire on Dec. 2, 2016.

"I am concerned and I have been making some observations," Thompson said before ordering deputies to search Almena for drugs. After not finding any, the sentencing hearing was allowed to proceed.

Almena was charged with being criminally negligent when he illegally converted an industrial Oakland warehouse into a residence and event space for artists. They say he stuffed the building with flammable materials, extension cords, and it had no smoke detectors or sprinklers.

Since May, Almena has been home in Lake County on house arrest. He was released from custody after posting a $150,000 bail bond from Santa Rita Jail where he had been held since June 2017 due to coronavirus concerns.

Under the plea deal, Almena is likely to continue to be monitored by an ankle monitor at home for another 1½ years and be subject to three years of supervised probation. As part of that probation he must undergo drug tests, relinquish any firearms and continue mental health treatment, among other requirements. 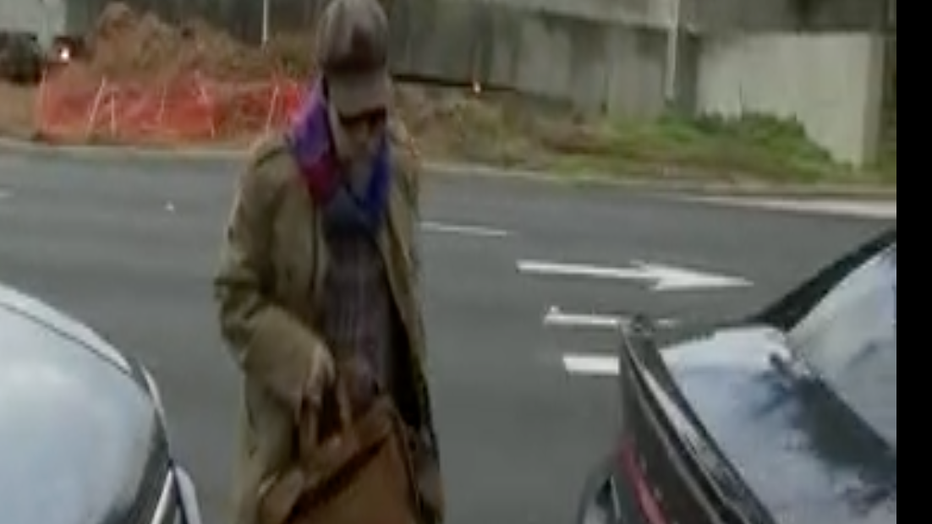 Almena's attorney Tony Serra read a statement from his client into the record that in part included the words, "I am sorry. I am sick with shame...it is my fault." and that the fire was "I did nothing to stop it. I was fueled by my stupidity and reckless actions."

Family members of those who died during the warehouse party are upset with the deal. They had wanted a trial instead.

Many read letters before Judge Thompson ahead of the formal sentencing.

Dan Siegel, the lawyer for the parents of fire victim and teacher Sarah Hoda, read her family's statement. 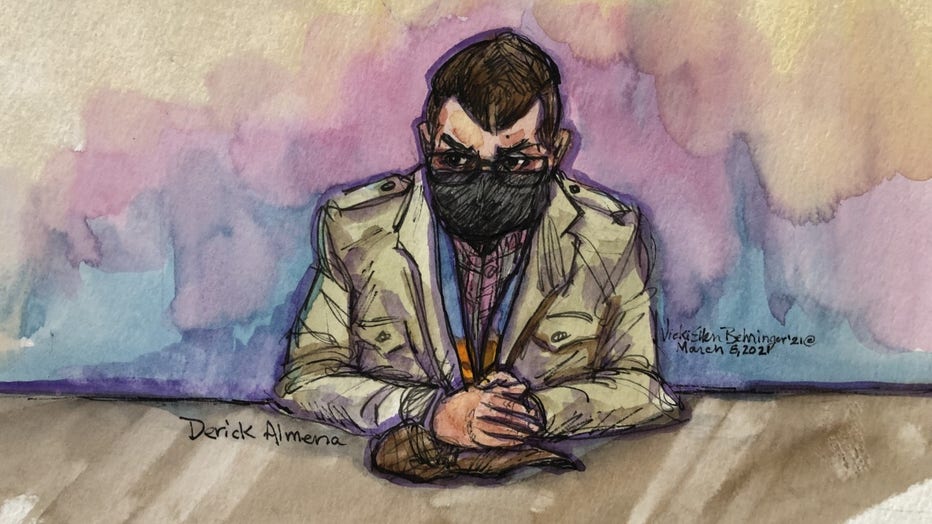 They wrote that the criminal trial - not a plea agreement - would have provided the best window into how government neglect allowed the fire to occur and that "facing one's faults" can lead to real change.

Hoda's family called the deal a "slap-on-the-wrist" punishment and they "vigorously recommended" the judge reject it.

In a victim impact statement, Keith Slocum, the stepfather of Donna Kellogg, who died in the fire, said he was "repulsed by the plea agreement."

Slocum said it wasn't fair that Almena will be able to be finished with his sentence in a year and a half, while his stepdaughter will never be alive for another day, let alone another Thanksgiving meal with her family.

"You do not even comprehend the sorrow we feel," he wrote to the court. "It is you who loaded the fuel and provided the match." 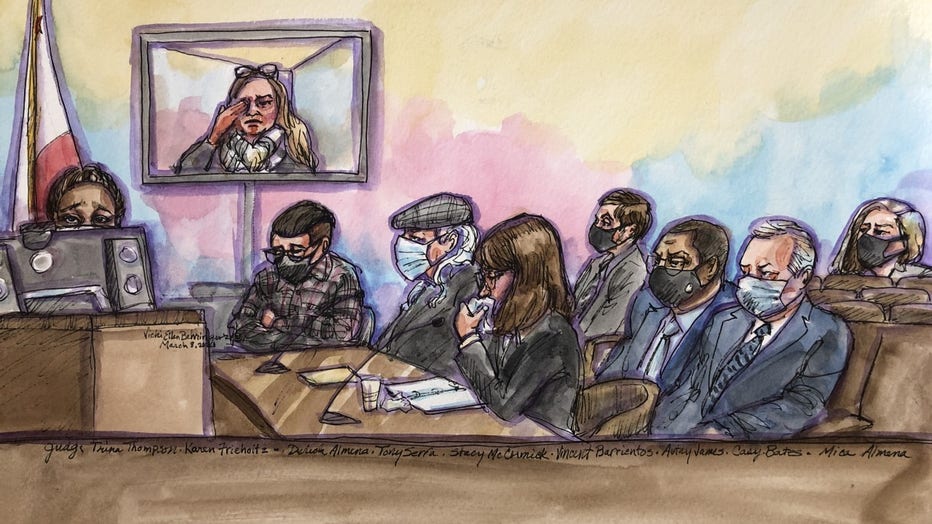 Victim impact statements are read in court at the sentencing of Derick Almena for the Ghost Ship fire.

Colleen Dolan didn't mince any words, directing her fury toward Almena about the death of her daughter, Chelsea Faith Dolan.

"Your lies helped you slither around your responsibility," she said before the judge. "Your swaggering ego killed 36 people. I curse you with the terror and agony those 36 extraordinary human beings felt in their last moments. If ghosts can haunt, I do not wish for their beautiful souls to haunt you, Derick, because they are innocent. You are not. I curse you with all the power the universe gives to a bereaved mother."

Outside of the Oakland courthouse after the sentencing hearing, Almena's attorney again emphasized his client's remorse. "He’s never going to recover," Serra said. "He’s going to have this in his nightmares, in his conscious, wherever he goes for the rest of his life."

Judge Thompson acknowledged the fact that the plea deal was deeply unsatisfactory to those whose loved ones died in the fire but said that a new trial would be complicated by the fact that some key witnesses would be unable to appear due to COVID-19 travel restrictions and the difficulty in seating a jury during the pandemic, among other things.

"I know that no family member will find this in any way acceptable and I accept that responsibility," Thompson said.

"This is the most difficult thing I've ever had to do," she said. "This one haunts me on a regular basis."

District Attorney Nancy O'Malley issued a lengthy statement after the sentence was read. It read in part, "From the very occurrence of this tragedy, the families and loved ones of the victims have been at the forefront of our minds. Although this case is now resolved, those who tragically lost their lives that night will be remembered and mourned forever."

A hearing on Almena's restitution to the victims in the case is scheduled for April 30.