Neither Democrats nor Republicans have been able to turn Wisconsin into a safe state, which means America's Dairyland is set to play a crucial role in the 2020 election.

Poll numbers would seem to suggest Democrats could count on Wisconsin swinging their way in this fall’s presidential election.

Joe Biden has the support of 47% of likely voters, as opposed to the 43% of support garnered by President Donald Trump, according to Marquette University Law School’s latest poll.

Dr. Charles Franklin, professor of law and public policy at Marquette and director of the poll, said Biden has enjoyed a small, but consistent advantage for much of 2020.

Even so, as 2016 taught the world, it would be reckless to cast Wisconsin as a safely Democratic state. Make no mistake: America’s Dairyland is a swing state, and it has been for generations.

For proof, look no further than local politics.

During the Democrats’ 24-year hold on Wisconsin, Republican gubernatorial candidates won the governorship more often than their counterparts.

Dr. Mordecai Lee, Professor Emeritus at the University of Wisconsin-Milwaukee, said that is due to the governors’ races being held during midterm elections. Lee, a Democrat, served in Wisconsin’s State Assembly for three terms and in the state Senate for two terms from 1976 until he voluntarily left politics in 1990. 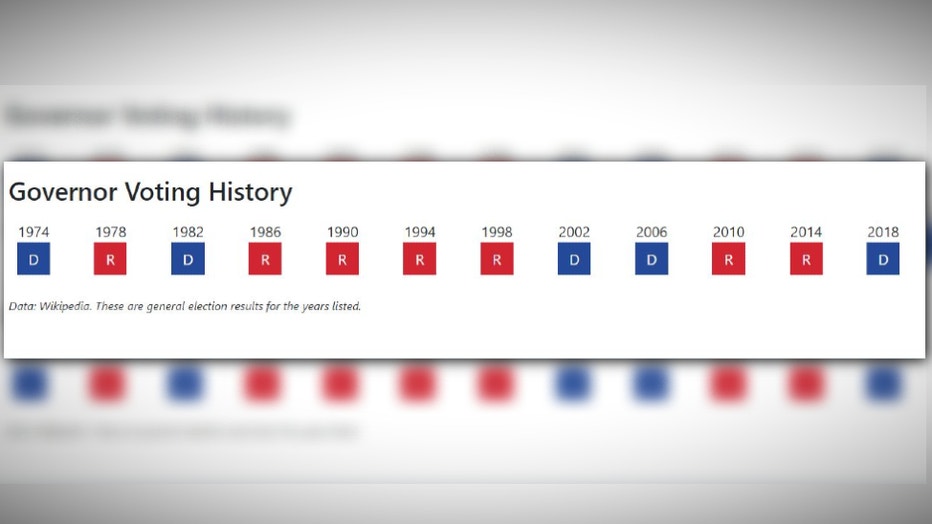 Republican gubernatorial candidates found much success in Wisconsin, even amid the Democrats' 24-year streak of winning presidential races there. (Source: 270towin.com)

Lee said the gubernatorial outcomes further demonstrate Wisconsin’s nature as a swing state. Both major parties always have a chance at winning.

Even during the Democratic streak, Lee and Franklin agreed that the margins of victory were more telling than the wins themselves.

Since 2000, in years in which Republicans won the White House, Democrats only won slim victories in Wisconsin. 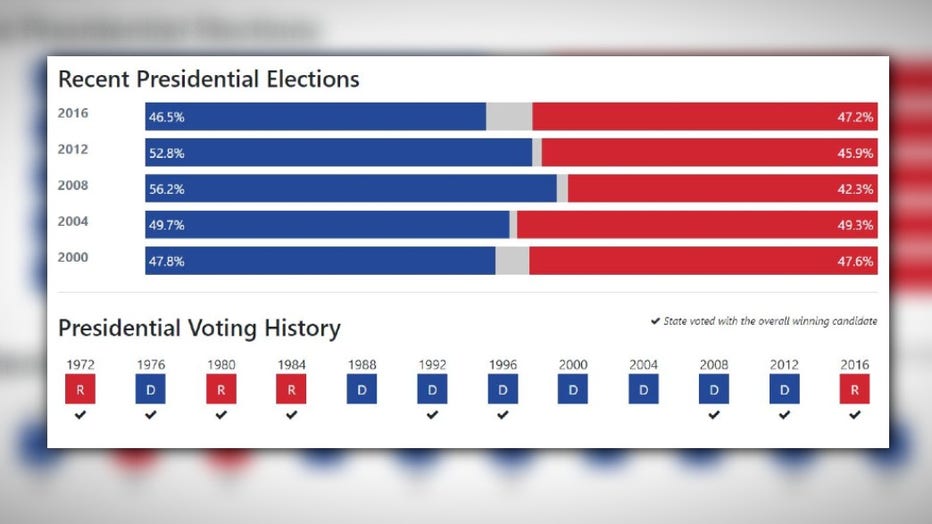 Before Donald Trump won Wisconsin in 2016, Ronald Reagan was the last Republican to do so in 1984. (Source: 270towin.com)

In terms of congressional districts, Democrats used to hold five of the state’s nine seats in the House of Representatives. But the state lost a seat after the 2000 census, which evened things out at four apiece after redistricting. 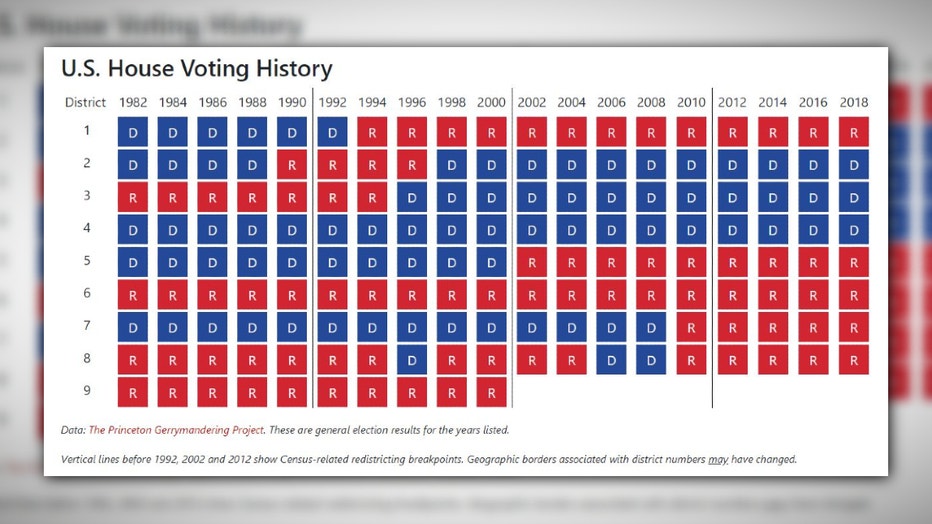 Wisconsin Republicans hold a 5-to-3 majority in the U.S. House. (Source: 270towin.com)

Since 2010, Republicans have held a 5-to-3 majority in the U.S. House. Also in that time, Wisconsin has sent a senator from each party to Washington. 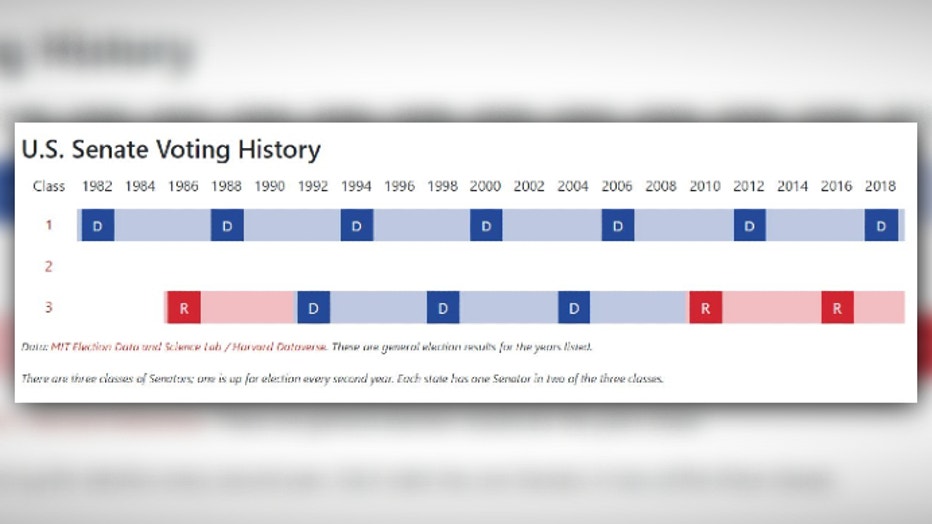 Since 2010, Wisconsin has elected one Democrat and one Republican to the U.S. Senate. (Source: 270towin.com)

With 2020 being another census year, it remains to be seen if Wisconsin’s representation will stay the same. But Franklin doesn’t anticipate the loss or gain of another seat.

He described Wisconsin as a “slow-growth state” that has not seen sharp demographic changes. The northern part of the state has lost population, while the southern half has enjoyed the most growth, especially in counties with major urban centers.

“The cities will be a bigger share this time than they were a decade ago,” Franklin said.

He called Green Bay a “mixed area,” because while it and many neighboring cities lean Democrat, it is surrounded by Republican countryside.

Even though he doesn’t anticipate changes in representation, Franklin does foresee a conflict with redistricting. Based on polling data, he anticipates a split state government, with a Republican legislature working with Democratic Gov. Tony Evers.

“I can’t imagine they are going to agree on anything, and so it will be a matter for the court,” Franklin said. “And there’s a lot of uncertainty about that, in terms of which courts and how to deal with it.”

Neither party holds control of the state for long. And to understand why, Lee said it’s best to turn the clock back by nearly a century.

Philip La Follette cruised to a comfortable victory in Wisconsin’s 1930 gubernatorial race. The progressive Republican was the state’s 27th governor.

Republican politics had dominated Wisconsin for decades, common in the post-Civil War era.

After his defeat, La Follette left the Grand Old Party and founded the Wisconsin Progressive Party. The notion of a third-party candidate winning a high-ranking public office may sound taboo in modern politics, but it worked for La Follette. 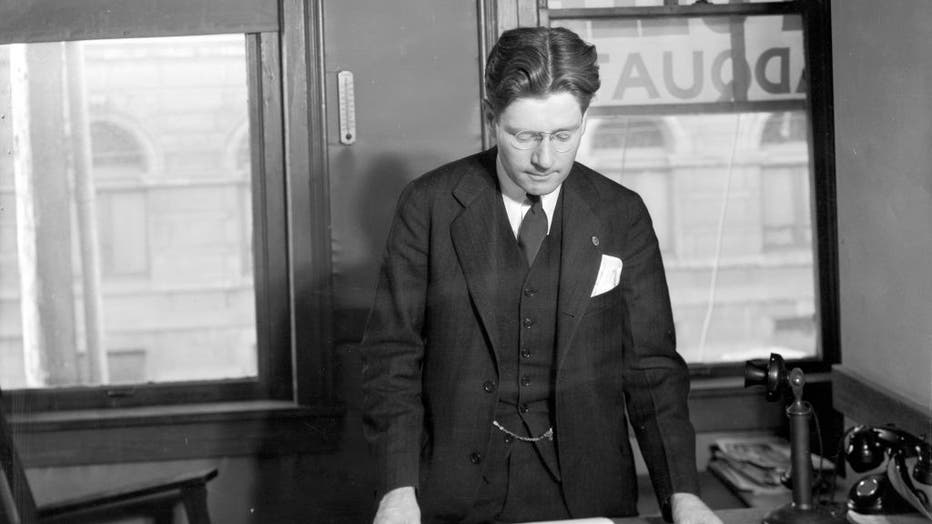 Though today’s political climate would place a progressive candidate on the left side of the political spectrum,  Lee said La Follette understood most voters were moderates and that the bulk of them could be found in the “middle of the road.”

The Wisconsin Progressive Party didn’t last — it folded in 1946. Even so, as a lasting effect, generations of Wisconsin voters didn’t affiliate themselves with a party.

Even today, Wisconsin has nonpartisan registration, which means there is no option to affiliate with a party on the state’s voter registration document.

Still, Lee said the number “middle of the road” voters began to dwindle over time, pointing to the Gov. Scott Walker’s 2011-2019 tenure as the catalyst.

To address it, he proposed the Wisconsin Budget Repair Bill. Critics said the bill crippled the rights of certain labor unions to collectively bargain.

Protesters worked for months to stop the bill. Democrat state senators even fled the state in an effort to stop its passage. 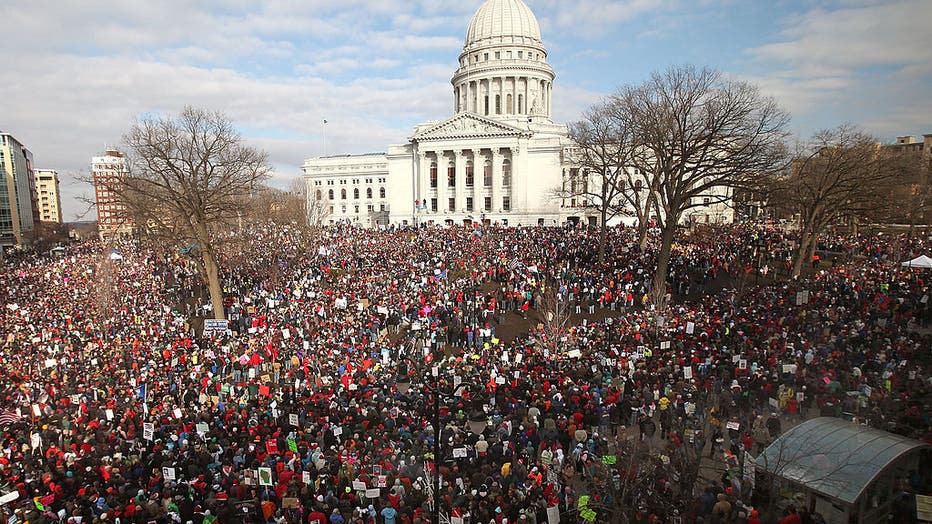 The bill became law in June 2011. That November, opponents began efforts to recall Walker from office.

Milwaukee Mayor Tom Barrett, who Walker defeated in the 2010 gubernatorial race, again emerged as the Democratic nominee. The two faced off in a June 2012 election.

But despite months of vocal demonstrations, Walker tightened his grip on power, garnering 206,644 more votes in the recall election than he did in the 2010 election.

He became the first incumbent governor of any state to survive a recall election.

Republicans had hoped Walker’s strong showing meant then-Utah Gov. Mitt Romney could wrestle Wisconsin away from President Barack Obama that November. Obama won it by a wide margin in 2008.

While Romney closed the gap, Obama still held on to the Badger State by a sizable margin, meaning Republican hopes to finally turn the state red would have to wait another four years.

There’s no single factor that led to Trump’s 2016 victory in Wisconsin. But if you had to point to one, a strong case can be made for party unity.

Neither Trump nor Clinton won the primaries in Wisconsin that spring.

Franklin said Trump found success in November by consolidating support of the party at the Republican National Convention.

Up until that point, conservative-leaning Wisconsinites had been slow, even resistant to embracing Trump as the face of the party.

Even Walker, who had previously endorsed Cruz after dropping out of the race himself, came around to endorsing Trump at the convention. 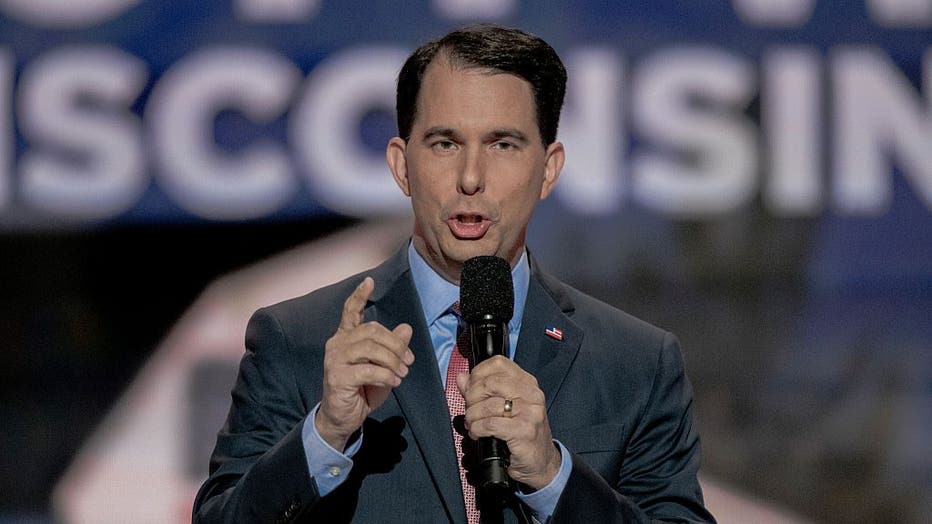 Franklin’s polling data showed Trump never got above 50% favorability. But that changed in the months following the convention.

“What we see in the polling data is that GOP rank-and-file voters were quite negative towards Trump until the Republican convention,“ Franklin said.

The state’s evangelicals, along with the conservative-leaning Catholics, and the non-college educated White population went heavily for Trump, Franklin said.

Clinton, on the other hand, never achieved party unity. The Democratic Party remained fractured, even after the final primary vote had been counted.

Many Sanders supporters rejected establishment politics and turned the Democratic National Convention into a heated demonstration.

Upon her defeat, many critics pointed to Hillary Clinton’s decision not to visit Wisconsin as a crucial reason she lost the state.

Even so, Lee believes to say Hillary Clinton ignored the state is to misrepresent what happened that year.

She had surrogates canvassing the state. Her husband, former President Bill Clinton, visited, as did their daughter, Chelsea, Lee said.

Lee said there was a percentage of voters who wouldn’t vote for her simply because they’d never vote for a woman, and a group that simply didn’t like the former first lady and secretary of state.

But unlike 2016, Sanders didn’t find any success in Wisconsin. Biden swept every single county. The same thing happened in the neighboring state of Michigan.

Franklin said by the time Wisconsin held its April 7 primary, Biden was enjoying the consolidation of support that Clinton lacked four years earlier.

He said voters had considered Biden a strong second choice. So, as other candidates exited the race and endorsed him, Biden became the frontrunner. 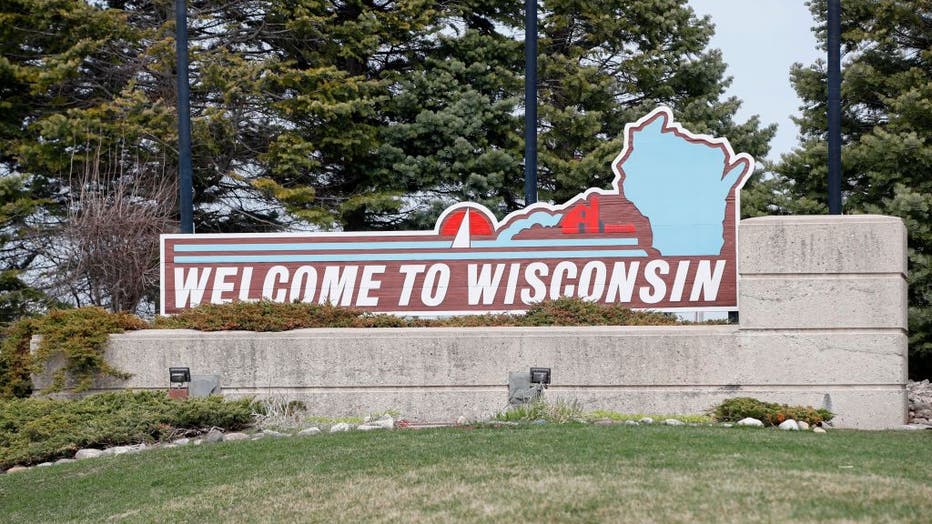 The Wisconsin Welcome Sign is seen in Pleasant Prairie, Wisconsin, on April 6, 2020. (Photo by KAMIL KRZACZYNSKI/AFP via Getty Images)

And although the COVID-19 pandemic forced the Democrats to convert their convention — slated for Milwaukee — into a virtual event, Franklin said Biden had the benefit of turning it into a celebration, rather than a means to forge unity.

That factor could restore public confidence in polling data, which mostly shows Biden winning in the leadup to the November election, but famously also predicted a Clinton victory.

While Franklin understands that 2016 left many people skeptical of polling, he cautions against writing off the science of polling as a whole.