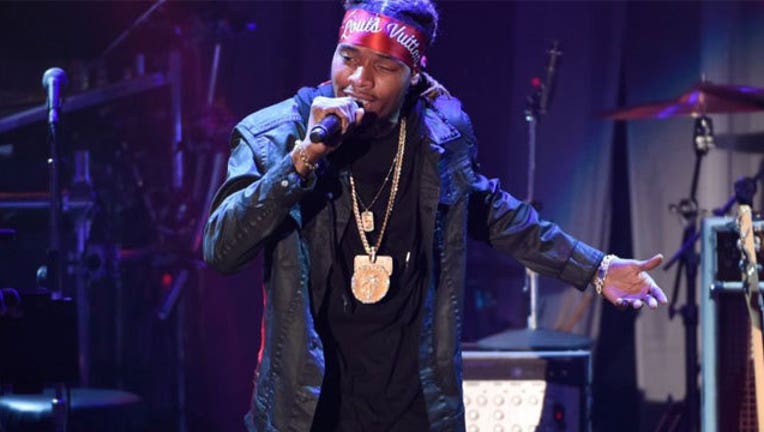 PATERSON, N.J. (AP) — A New Jersey school district is investigating how rapper Fetty Wap was allowed to record a music video that included drug references and a pole dancer in his old high school.

The Paterson native released the video for "Wake Up" last week.

Paterson school district spokeswoman Terry Corallo told NJ.com (http://bit.ly/22xNIxW ) the district is investigating whether procedures were followed in allowing parts of the video to be recorded at Eastside High School. Fetty Wap dropped out of the school.

Corallo said the district doesn't endorse the content of the video. It was shot during non-instructional hours and didn't include students, she said.

The video released April 20 includes numerous drug references and features a scantily clad woman dancing on a pole inside a classroom. Numerous banners and posters seen in the video read, "Go Team Kush," which references a strain of marijuana.

Toward the end of the video, a woman presumed to be a teacher takes an apple from her desk and uses it as a bong.

Some community leaders questioned why a video they say glamorizes negative behaviors was allowed to be filmed at the school.

"I'm from Paterson and I'm proud of his success, but as a parent and school board member I think it sends the wrong message," Kenneth Simmons told The Record. "To me, it glorifies dropping out of high school and getting high."

In a statement issued Wednesday afternoon, the rapper defended his actions.

"I went back to my old high school because I love my city," he said. "I wanted to show the students of Paterson that someone who walked those same hallways they walk every day and sat in the same classrooms shown in the video has become successful. If I can do it they can do it too."

The label "encourages and champions artistic expression and creativity from our artists," the company said.