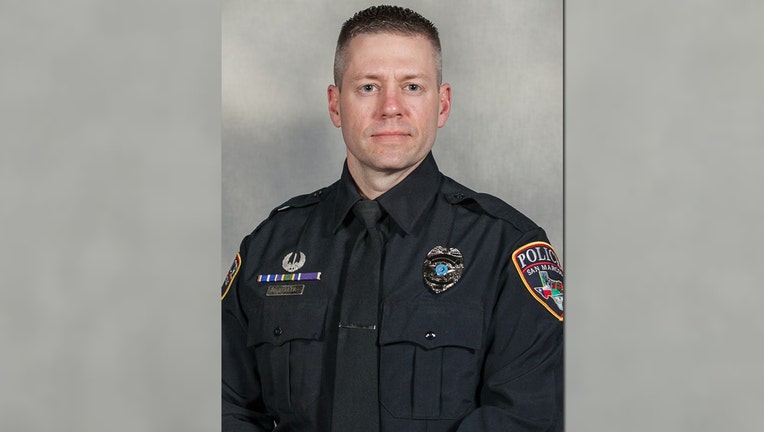 SAN MARCOS, Texas - An officer with the San Marcos Police Department was struck by a vehicle on I-35 Monday. All lanes of IH-35 northbound around Exit 205 B were shut down Monday afternoon, according to SMPD.

Interim Police Chief Bob Klett said SMPD Officer Paul Beller was dispatched at 1:30 p.m. to the area for a call of lumber in the roadway.

“As he exited his patrol car, Officer Beller was struck by a passenger car,” Klett said. He added that the officer was transported to a trauma facility and was undergoing surgery as of about 4:30 p.m.

Klett said, “We have no updates on his condition at this time, but our entire SMPD and City family hopes and prays for the best possible outcome. We stand ready to support him and his family through this difficult recovery.”

Since the accident, San Marcos PD has set up a donation account for Officer Beller's recovery.

" The outpouring of support in prayers and well wishes from the community has been overwhelming. In response to numerous requests, a donation account has been set up for Officer Beller as he faces an extensive recovery. The SMPD staff will see that 100% of your contributions go toward supporting Officer Beller during this difficult time," the donation page states.

Donations for Officer Beller can be made here.

Klett is reminding all drivers to use extreme caution and yield when they see first responders on the scene of an accident or other incident.

“Texas law compels drivers to reduce their speed to 20 miles below the posted limit or move into another lane when there is a law enforcement or first responder vehicle along the side of the road,” Klett said. “We want to do everything we can to keep our first responders and other drivers safe.”

The interstate was reopened to traffic just before 6 p.m. The Texas Department of Public Safety is investigating the crash.