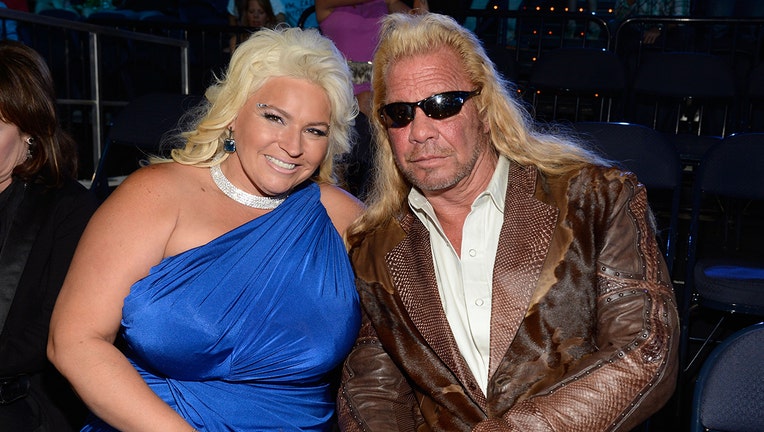 Beth and Duane Chapman attend the 2013 CMT Music awards at the Bridgestone Arena on June 5, 2013 in Nashville, Tennessee. (Photo by Kevin Mazur/WireImage via Getty Images)

Fox News confirmed that the 67-year-old reality TV star is engaged to girlfriend Francie Frane. The news comes roughly 10 months after his wife of many years, Beth Chapman, died due to throat cancer.

“They’re very happy and looking forward to a long life together,” a spokesperson for Chapman told Fox News in a statement.

Speaking to The Sun, the happy couple shared some insight with fans as to how he went about popping the question. The acclaimed bounty hunter opted for a romantic candlelit proposal ahead of a dinner at their home in Colorado, where they’ve been quarantining together amid the coronavirus pandemic.

“I wasn't expecting it at all,” Frane, 51, told the outlet. "I think I had gone to pick up some food and then when I came back he had all the lights turned down with just a few lights on and a bunch of candles lit. So when I came in I was like, 'Wow, this is awesome.' Then he said, 'Come in, sit down because I need to talk to you.”

She continued: “So I put all the food in the kitchen and I came in and he said, 'I know that God brought you into my life and I don't want to spend one moment of it without you.’”

With that, he reportedly got down on one knee and asked if she would spend the rest of her life with him.

Dog told the outlet that they’re hoping to tie the knot officially after the coronavirus lockdown is over in a lavish ceremony that all 12 of his children, her two sons and their respective grandchildren will attend.

He noted he wants the “biggest wedding there’s ever been” and called it “one hell of a party.” He even stated that he’d love to open the guest list up to fans.

"I'm sorry but that's just me. I hope I can talk Francie into it and open it to my fans, the 'Dog Pound,' to everybody.”

Although it may seem soon after the death of Beth to get engaged, the couple shared that they both actually bonded over their mutual grief. Frane lost her husband of many years to an illness recently as well.

“And you know there's always going to be haters, and I probably arrested half of them,” Dog joked.

Frane added:  "I think too that there's always going to be people who say we did this wrong or we did that wrong or we've moved on too quickly or too fast. But the truth is that both of us have spent three years walking alongside our spouses sick and we know that God brought us together and that's why we don't believe that it's too soon. And because we both have done our share of screaming and crying and asking why. Then for us to come together the way that we did and build this friendship because of what we've been through, that turned into a love story. We don't believe that it's too soon."

The outlet reports that the family is fully supporting their union.