A caravan of President Trump supporters this weekend rolled into Marin City, echoing similar rallies across the country, which was intimidating to some and a political expression of free speech to others.

MARIN CITY, Calif. - A caravan of President Trump supporters this weekend rolled into Marin City, echoing similar rallies across the country, which was intimidating to some and a political expression of free speech to others.

There were conflicting accounts about the tenor of the pro-Trump event in the small city where people of color make up a majority of the residents.

"We were happy, celebrating," said Stacey Evans, 49, a respiratory therapist who moved from Southern California to Windsor and organized the Sunday pro-Trump rally through the North Bay. "We were not there to intimidate. We had no idea that Marin City was predominantly Black when we stopped there. We have Black people in our group. We were all there in unity."

Evans said the caravan ended up stopping in Marin City by chance so that some of the roughly 100 participants could stop and go to the bathroom.

After the caravan ended, she shared video that shows she and her 13-year-old daughter were targeted with eggs while they were sitting in her white pickup truck across from the Marin City Library.

She said she was so scared, she called for police and told dispatch she was being assaulted. Video she shared with KTVU shows one woman throwing an egg at Evans' truck, while her daughter begs to leave, fearing they would be physically injured - which they were not.

The caravan started in Santa Rosa, passed through the Vintage Oaks Shopping Center in Novato and then drove into the parking lot at the Gateway Center in Marin City. Marin County Sheriff's Sgt. Brenton Schneider told The Chronicle that the caravan included an estimated 250 to 350 vehicles. Nobody was arrested, but the sheriff’s office received reports of arguments, fights, and claims that Trump supporters were targeted with paintballs and eggs.

Several people, most of them supporters of Democratic challenger Joe Biden, viewed the rally in a completely different light.

And they likened what happened in Marin City to similar pro-Trump rallies across the country.  Pro-Trump caravans blocked the Mario Cuomo Bridge in New York, snarled traffic on the Garden State Parkway in New Jersey and surrounded a Biden-Harris bus in Houston, Texas this weekend. The FBI is now investigating the incident in Houston.

What happened in Marin City, they say, is a microcosm of the politically charged feelings raging throughout the country with just hours left to the election. And several witnesses said some in the caravan yelled racial epithets, despite what Evans said.

Felicia Gaston, also of Marin City, said she heard those in the caravan shouting at people to "get an education." And what was even more insulting, she said, was that "all the people who came, the Trumpsters, they didn't have their masks on."

One man who asked not to be identified told KTVU that he heard some of the Trump supporters yelling "Black Lives Don't Matter," and telling people on the sidewalk to get down on their bellies. The Chronicle reported that some heard a racial slur yelled by riders in the caravan.

Bonnie Peyton witnessed what she described as a "horrifying car parade" block traffic on the highway in Novato.

"They weren't allowing people to drive safely," she said. "They were stopping traffic and it was pretty clear these people were not from around here."

Katy Foster, a principal at Marin's Community School tweeted photos of the caravan in Marin City, saying that she believed the Trump supporters were then to "intimidate" Black voters.

Marin City is located next to Sausalito in the predominantly white Marin County. Its demographics are nearly 40% Black and 13% Hispanic. The median income in the town of about 3,000 people is $42,000.

In an interview Monday, Foster described a "steady stream of mostly trucks" bearing Trump flags and blue-and-black flags symbolizing the "Thin Blue Line," which is the symbol of support for law enforcement. Drivers and passengers were yelling things out the window, like "'We'll pray for you' and 'Four more years,' " she said. "It was really horrible."

Foster said she saw many young people of color upset on the sidelines and older people showing restraint, making "sure it didn't turn into something worse."

As a history teacher, Foster said that she believes in First Amendment rights of free speech.

But the caravan, in her opinion, was not that.

"Having a Trump rally two days before the election and rousing racist sentiments when there is clear evidence of voter suppression, especially for voters of color across the country," Foster said, "is something that is intentionally inciting violence." 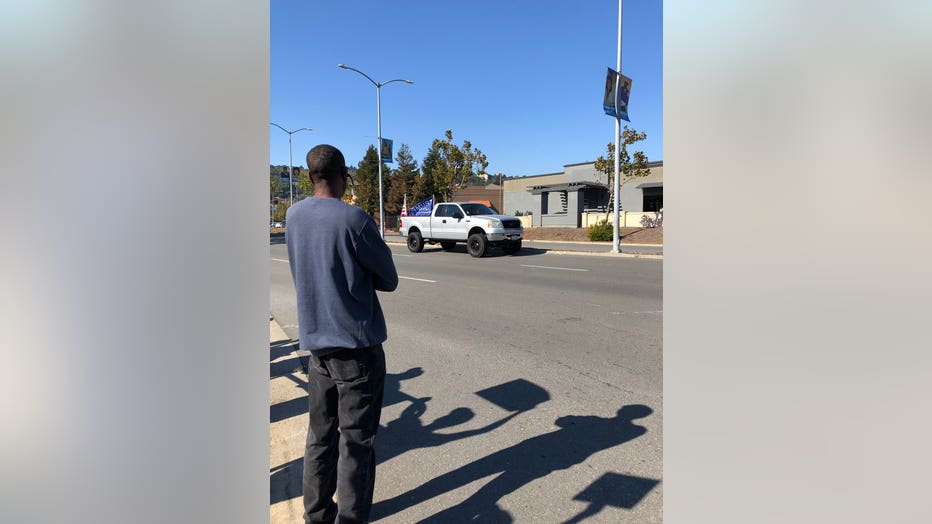 Photographer Joseph Cousins contributed to this report. Lisa Fernandez is a reporter for KTVU. Email Lisa at lisa.fernandez@foxtv.com or call her at 510-874-0139. Or follow her on Twitter @ljfernandez