AUSTIN, Texas (AP) - Quinn Ewers passed for 225 yards and two touchdowns in his debut at quarterback for Texas and the Longhorns rolled over Louisiana-Monroe 52-10 Saturday night in the season-opener for both programs.

The win against an overmatched opponent was still a much-needed one for second-year coach Steve Sarkisian after the Longhorns went 5-7 in 2021. Texas next week hosts No. 1 Alabama, where Sarkisian was offensive coordinator when the Crimson Tide won the national championship in 2020.

Ewers was one of the top recruits in the country out of high school near Dallas but skipped his senior season and enrolled at Ohio State. He was buried on the Buckeyes’ depth chart and took just two snaps last season before transferring. He won the starting job over Hudson Card, who was the Texas starter to open the 2021 season.

Longhorns kick off season with dominating win over ULM at home

Ewers said he was surprisingly calm in his first college start.

"I didn’t have any butterflies going into today. A little bit on the first play, but not even as much as I did in high school," Ewers said. "I liked it. I enjoyed the game."

Ewers had a solid night despite some struggles to hit deep throws and his biggest plays came on catch-and-run hookups his receivers turned into long gains. His favorite target on the night was tight end Ja’Tavion Sanders, who caught six passes for 85 yards and a first-quarter touchdown.

Bijan Robinson finished with 111 total yards on 13 touches, and two third-quarter touchdowns on a 16-yard catch and a 9-yard run. The third-year running back has a touchdown in 12 of his last 13 games.

"It’s a lot of fun," Ewers said of the Texas offensive and its multiple playmakers. "Especially when things are clicking on all levels." 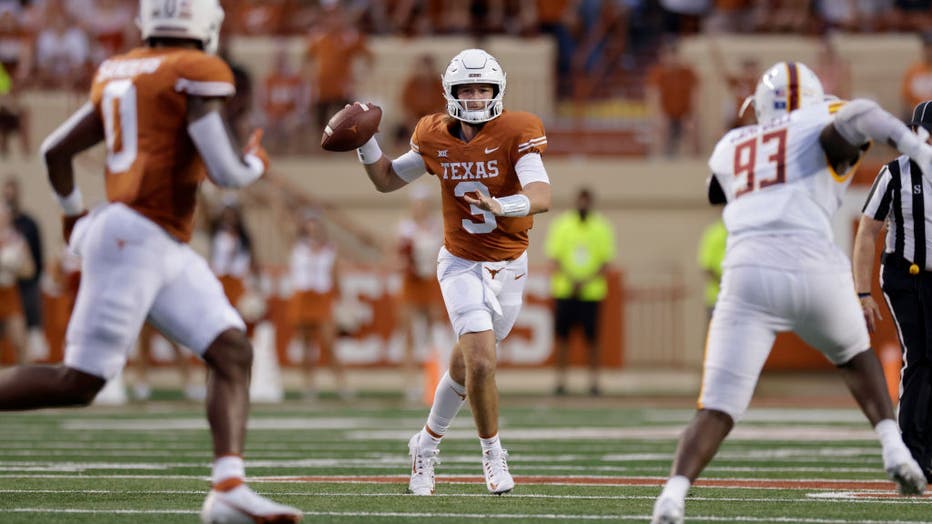 AUSTIN, TEXAS - SEPTEMBER 03: Quinn Ewers #3 of the Texas Longhorns looks to pass in the first half against the Louisiana Monroe Warhawks at Darrell K Royal-Texas Memorial Stadium on September 03, 2022 in Austin, Texas. (Photo by Tim Warner/Getty Ima

Texas: Sarkisian predicted there would be some misfires and growing pains from his young quarterback and he was right. Ewers first pass attempt was late to a wide open receiver and broken up. His second was a throw into coverage that was intercepted, a turnover that set up a Warhawks field goal. But Ewers rebounded nicely with seven consecutive completions, including his first career touchdown to Sanders .

"I don’t think anybody wants to throw an interception on their second career pass," Sarkisian said. "It was a good lesson for him. He tried to force a throw."

Sarkisian said he didn’t try to dial down the offense after the turnover.

"You can’t expect him to ride this bike and do it with training wheels on. I’ve got to let him go," Sarkisian said.

Texas’ first points of the season came on a punt block less than two minutes into the game. A bull rush up the middle opened a gap for D’Shawn Jamison, who was so close to the punter that the kick went right into his gut. Keilan Robinson’s scoop and score from 12 yards made it 7-0.

Sarkisian said he predicted a blocked punt on the opening series.

"That’s exactly how this thing started," he said.

Jamison’s punt block was just his first big play. He made another in the third quarter when he turned an interception off a tipped pass into a 69-yard touchdown.

Sarkisian said Alabama transfer wide receiver Agiye Hall is back with the team after he was suspended following an arrest for misdemeanor criminal mischief, suggesting he could play next week against his former team. But Sarkisian said another Alabama transfer, tight end Jahleel Billingsley, is serving a six-game NCAA suspension for something the coach said happened during his time at Alabama. He did not elaborate.

Texas hosts No. 1 Alabama in what is shaping up as the national game of the week between two future SEC opponents. The Longhorns are scheduled to leave the Big 12 in 2025.