Ex-Fort Worth cop charged with murder; released on bond

The former Fort Worth Police Department officer who fired into a home, killing Atatiana Jefferson, has been charged with murder.

FORT WORTH, Texas - The former Fort Worth Police Department officer who fired into a home, killing Atatiana Jefferson, has been charged with murder.

Aaron Dean, 34, was arrested by Fort Worth police on Monday around 6 p.m. Online court records show the ex-officer was booked into the Tarrant County jail and charged with murder. He has since been released on a $200,000 bond.

The department officially announced the arrest in a tweet Monday afternoon. They held a short press conference Monday night, but they but did not answer any reporter questions.

Lee Merritt is representing Jefferson's family. After Dean's arrest, he released a statement on behalf of the family.

"The family of Atatiana Jefferson is relieved that Aaron Dean has been arrested and charged with murder," Merritt said. "We need to see this through to a vigorous prosecution and appropriate sentencing. The City of Fort Worth has much work to do to reform a brutal culture of policing." 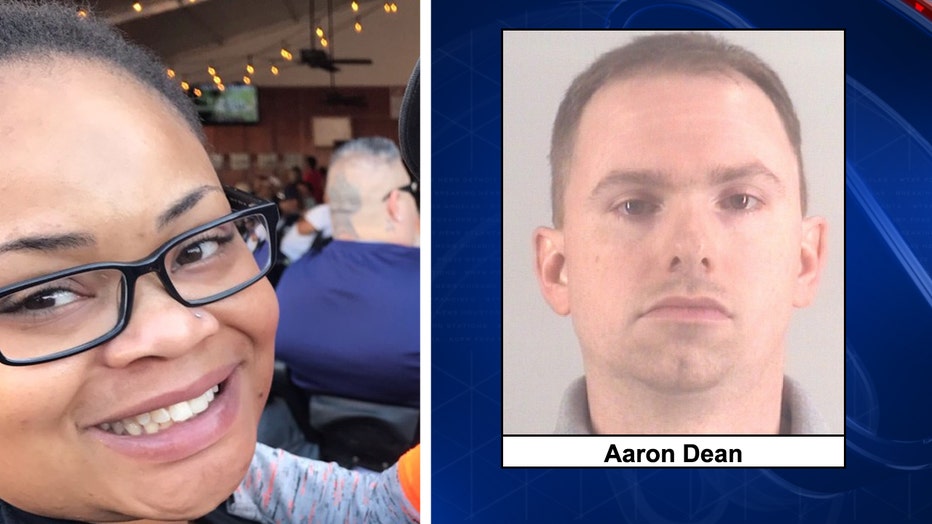 Earlier in the day, authorities held a press conference to release more information about their investigation into this shooting. Fort Worth Interim Police Chief Ed Kraus announced that Dean had resigned.

Chief Kraus added that he was going to meet with Dean Monday morning to fire him for violating the use of force policy, de-escalation policy, and for unprofessional conduct, but he resigned before that.

"[Jefferson's] father called this shooting senseless, and I certainly have not been able to make sense of why [Jefferson] had to lose her life. On behalf of the men and women of the Fort Worth Police Department, I'm so sorry for what occurred. You, Atatiana's family and friends, have my apologies, my condolences, and my prayers," Kraus said.

Dean, who has been an officer with Fort Worth PD since April 2018, could face criminal charges. Kraus said he expected to have an update on that criminal investigation by Tuesday.

The Fort Worth Police Department officer who fired into a home, killing Atatiana Jefferson, has resigned from his position at the police department.

Fort Worth PD has also contacted the FBI to review the officer's actions for possible civil rights violations. The other officer who responded with Dean is being treated as a witness in the criminal and administrative investigations.

Chief Kraus also assured the public that he is demanding a "thorough, transparent, and speedy investigation" into Jefferson's death.

"I get it. Nobody looked at that video and said there is any doubt this officer acted inappropriately. I get it. We are trying to train our officers better, shore up our policies and make sure they act and react the way the citizens intend them to," Kraus added.

Fort Worth Mayor Betsy Price also spoke, and gave condolences to Jefferson’s family, adding that there was nothing that could have justified what happened Sunday morning.

"We are all heartbroken today. Atatiana was a beautiful, smart, amazing young woman, by all accounts, who was unjustly taken from her family," Price said. "On behalf of the whole city of Fort Worth, I'm sorry."

MORE: Family of Atatiana Jefferson calls for officer to be fired after fatal shooting

Jefferson's family had previously called for the officer involved to be terminated.

Jefferson was killed after a neighbor called a non-emergency line at 2:30 a.m. Saturday after seeing the door open at Jefferson's home.

MORE: Fort Worth officer fatally shot woman inside her home while she was watching 8-year-old nephew

Fort Worth police released portions of the body camera video. It shows the officer walking around the perimeter of the house with a flashlight and gun drawn.

Investigators say when he got to the back window, he saw someone standing inside the home.

The officer did not announce that he was a police officer before shooting. A single shot was fired, killing Jefferson. Her 8-year-old nephew was in the same room at the time.

Body camera video of fatal officer-involved shooting in Fort Worth

After the shooting, police said a gun was found in the home, but gave no context as to where it was when the shooting happened. As part of the body camera video, they included a picture of the gun.

During Monday's press conference, Mayor Price addressed that information, saying it's "irrelevant," adding that Jefferson was a "victim" who was in her own home, taking care of her nephew.

Kraus said the decision to release that information, along with a picture of the gun, was a bad idea.

“In hindsight, it was a bad thing to do. I think that it was to show a weapon was involved, however, we are homeowners in the state of Texas,” he said.

Price also said that a third-party panel of national experts will be hired to review the Fort Worth Police Department. Police say there have been nine officer-involved shootings in Fort Worth so far this year.

Sgt. Manny Ramirez is the president of the Fort Worth Police Officer Association. He was at the scene after the shooting, but did not speak to Dean.

“We have to find a way to unify, to come together, to collaborate,” Ramirez said. “We can't have another one of these instances happen. This cannot happen again.”

Fort Worth police are expected to hold another press conference on Tuesday at an undetermined time.