Facebook’s oversight board said it will rule this week on whether former President Donald Trump would be allowed to reactivate his social media account after an indefinite suspension.

The board said it will announce its decision on its website at 9 a.m. ET on May 5.

Facebook has faced widespread criticism over account suspensions or post takedowns regarding misinformation, hate speech and nefarious influence campaigns in what some describe as sluggish and after-the-fact. The company set up the oversight board to rule on thorny issues about content on its platforms in response. 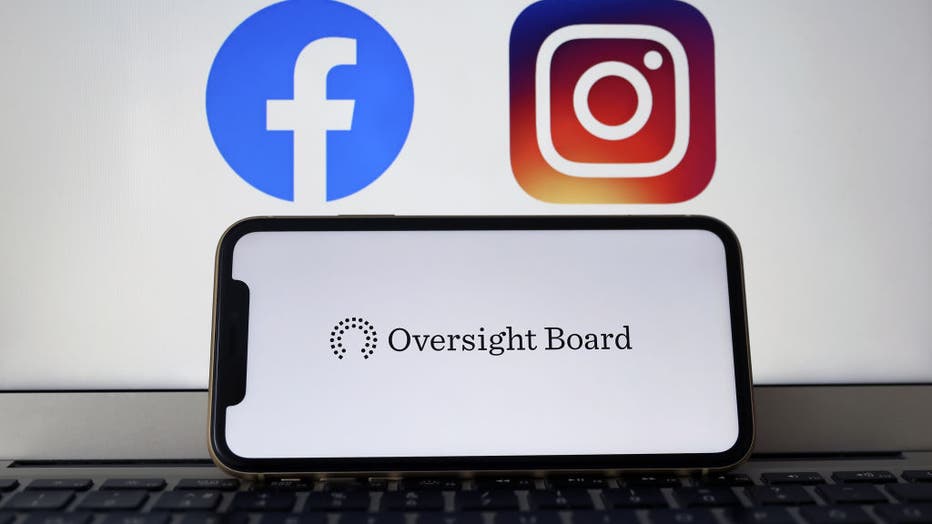 FILE- Facebook’s oversight Board logo is seen on a smart phone with Facebook and Instagram logos at the background in a file image. (Photo by Hakan Nural/Anadolu Agency via Getty Images)

On Jan. 21, the social media giant referred the suspension of such a high-profile political leader to the oversight board.

"We believe our decision was necessary and right. Given its significance, we think it is important for the board to review it and reach an independent judgment on whether it should be upheld," Nick Clegg, Facebook’s VP of global affairs, said in a statement at the time.

The board typically makes a decision within 90 days, its website says. But by mid-April, the panel said it had extended the public comment deadline on the Trump case after receiving more than 9,000 responses and would have a decision in the "coming weeks."

The board is made up of 20 people, made up of lawyers, professors, former politicians, human rights activists and experts in media policy and digital rights. The panel made its first five decisions earlier this year, overturning Facebook’s judgment in four cases.

Facebook said the oversight board is "the first body of its kind in the world," noting that it has the power to "impose binding decisions on a private social media company." While saying it would abide by the board’s decisions, the Wall Street Journal notes that Facebook still has discretion on whether to implement any policy recommendations.

Twitter also permanently suspended Trump earlier this year. On Jan. 8, the company permanently removed the @realDonaldTrump account after a review, citing "the risk of further incitement of violence."

Before his permanent suspension, Twitter briefly suspended Trump’s account for 12 hours on the day of the Capitol riot after he posted a video that repeated false claims about election fraud and praised the rioters who stormed the Capitol.

But two days after the insurrection, Twitter announced the permanent suspension in a detailed explanation posted on its blog, which said past Trump tweets amounted to the glorification of violence when read in the context of the Capitol riot and due to plans that had been circulating online for future armed protests around the inauguration of President Joe Biden.

While social media companies have faced criticism for a lack of a swift response to some of Trump’s past posts, the moves have also drawn condemnation from Republicans who allege the companies censor conservative messaging.

Vermont Sen. Bernie Sanders, an Independent, also said during a podcast interview in March that he did not "feel particularly comfortable" with Trump’s Twitter ban, arguing it could lead to censorship of users across the political spectrum.

"I don’t like giving that much power to a handful of high-tech people," Sanders said.

RELATED: Twitter will not allow Trump tweets to be resurrected by National Archives