What we know about children and COVID-19 vaccines

When will children be able to get COVID-19 vaccines? It depends on the child's age, but some teenagers could be rolling up their sleeves soon.

Since the onset of the coronavirus pandemic, many people have undergone thermal imaging temperature checks at schools, airports, workplaces and even sports venues — part of a larger approach to help lower the risk of COVID-19 in these public areas.

But researchers behind a new study say some of these devices show inaccurate temperature readings, with some reporting fever-level temperatures as normal, which could further lead to a "false sense of security."

The U.S. Food and Drug Administration even issued a public alert this week warning that improper use of such tools could lead to inaccurate temperature readings and "present potentially serious public health risks."

"While thermal imaging is not an effective diagnostic device for COVID-19, it can determine if someone has an elevated temperature, which can be an important risk management tool during the pandemic when used properly," FDA chief medical officer William Maisel said. "But improper use and marketing of thermal imaging systems may lead to inaccurate temperature readings and pose a potential danger to public health." 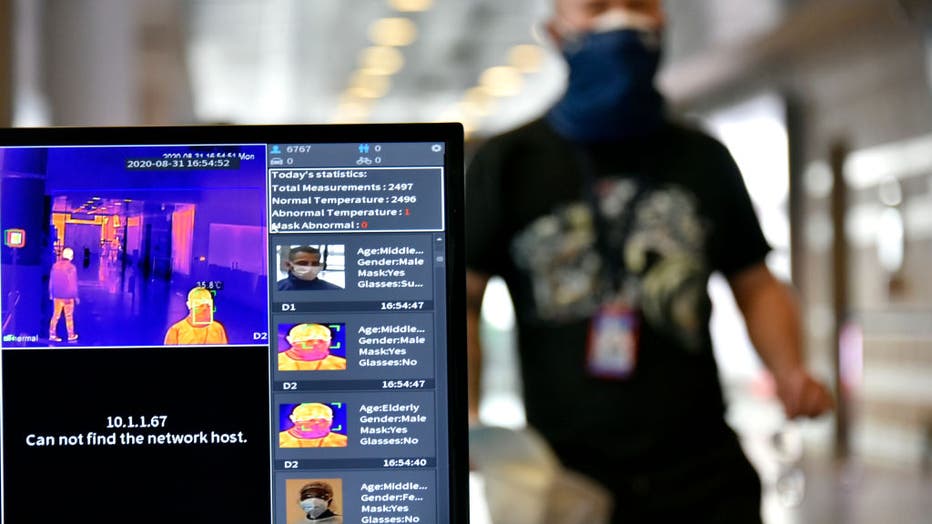 FILE IMAGE - View of a screen of a test system of a thermal imaging camera which checks body temperatures at El Dorado International Airport on Aug. 31, 2020 in Bogota, Colombia. (Photo by Guillermo Legaria/Getty Images)

The peer-reviewed study was conducted by IPVM, an organization that does video surveillance research, testing and reporting.

The study, which has been accepted into the Journal of Biomedical Optics, looked at seven different thermal imaging devices used to measure human body temperature. Among these were five temperature kiosks or "temperature tablets" and two "bullet camera" devices — all introduced in 2020 amid the COVID-19 pandemic.

Thermal imaging systems measure a person’s surface skin temperature. They detect infrared light emitted from the individual’s skin and convert that information into a temperature reading, the FDA says.

In other words, someone with a fever could register as being within the normal range.

"These findings suggest a human target specific algorithm that adjusts the recorded temperature to the human mean, with the strongest corrections applied to the most febrile readings," the study authors wrote, adding that a truly feverish person "would rarely be measured as such."

Under a process known as 510(k) clearance, the FDA typically requires such devices be tested for safety and effectiveness before going to market. But in April 2020, the agency said it would no longer require the pre-market review of these devices intended for diagnostic screening in order to "help ensure the availability of products that might offer benefit to health care providers and the general public during the public health emergency."

One was the Extech IR200, a non-contact forehead infrared thermometer cleared for clinical temperature measurement and general hospital use. The other control device in the study was the FLIR E54-EST, a handheld thermal camera.

Still, more than 200 companies now market thermal scanners, of which "a significant majority" first entered the market in 2020 during the COVID-19 pandemic — without any previous experience producing such devices, the researchers said.

Maisel told the Washington Post that the research identified several systems that "didn’t have the level of accuracy that we would expect." The agency still requires all devices meet certain expectations and regularly monitors for problematic systems, he added.

The FDA said it issued "warning letters" to four companies, including one in the study called Certify Global Inc., for selling "unapproved, uncleared, and unauthorized thermal imaging systems."

Certify Global did not immediately return a request for comment. A spokesperson told the Washington Post that the system does not alter high temperatures but does set a minimum temperature level that will return a 96-degree reading if the scan fails. She added that the system "uses world-class manufactured sensors for thermal applications, which are rigorously tested for accuracy."

The researchers concluded in the study that such devices being used around the world with potentially inaccurate readings could help fuel "a widespread false sense of security."

Furthermore, temperature-based screening — such as thermal imaging — is not effective at determining if someone definitively has COVID-19 because a person infected may not have a fever.

A study conducted in October found that less than 8% of 4,000 survey respondents who had COVID-19 symptoms reported having a fever within the first 10 days of getting sick. While estimates vary, infectious disease expects have said that roughly 40% of people with COVID-19 could be asymptomatic.

Thermal imaging systems have not been shown to be accurate when used to take the temperature of multiple people at the same time, the FDA adds on its website.

"The accuracy of these systems depends on careful set-up and operation, as well as proper preparation of the person being evaluated," the agency says.