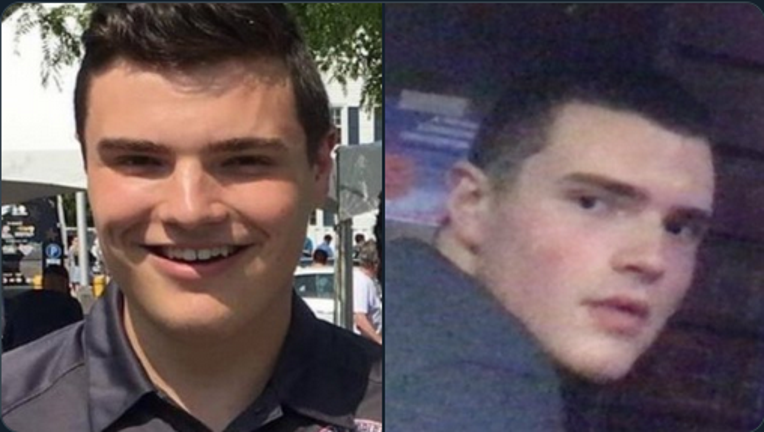 CONNECTICUT - A manhunt continued for a University of Connecticut student who police say is suspected in two murders, and the public is being warned that he should be considered armed and dangerous. Now his family, through a lawyer, is calling on him to surrender to police.

Peter Manfredonia, 23, was last seen Sunday walking along train tracks in East Stroudsburg, Pennsylvania, according to State Police. A photo of the suspect with a description was released Monday afternoon.

Mike Dolan, a lawyer for Manfredonia's family, said his clients are hoping he turns himself into the authorities.

"Peter, if you are listening, you are loved," Dolan said at a news conference on Monday. "It is time to let the healing process begin. It’s time to surrender. You have your parents’ and your sisters’ and your family’s entire support. So, Peter, from your parents, we love you, please turn yourself in."

Dolan added that Manfredonia had "sought the help of a number of therapists" for his problems.

Police reported that Manfredonia was at the scene of a homicide on Sunday in Derby, Connecticut, and at a serious assault on Friday in Willington, Connecticut. Police said he was armed with pistols and long guns stolen during a home invasion.

A stolen 2016 black Volkswagen Jetta believed to have been driven by Manfredonia was discovered in New Jersey at the Pennsylvania border.

Manfredonia is suspected of killing Ted DeMers, 62, and assaulting another man who was not identified.

DeMers was pronounced dead at a local hospital. The other man suffered severe wounds described as sword or machete-inflicted, state police said.

Connecticut Trooper Christine Jeltema said police were called to a home in Willington early Sunday morning. A man reported he had been held against his will by Manfredonia, who then left with food, several guns and the man's truck, which was found abandoned at 6:45 a.m. near Osbornedale State Park.

Police investigators then went to the Derby home of an acquaintance of Manfredonia and found him dead. He was identified Sunday afternoon as Nicholas Eisele, 23.

Manfredonia is a 2015 graduate of Newtown High School and a senior at the University of Connecticut majoring in finance and mechanical engineering, the Connecticut Post reported.

If you have any knowledge of his whereabouts, the New Jersey State Police are asking that you call the Major Crimes North Unit at 201-247-0321.