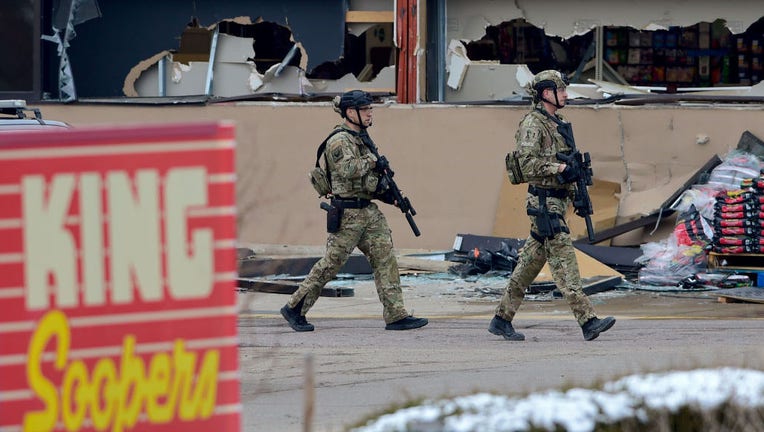 Armed police officers are seen outside broken windows at King Soopers in Boulder, Colorado, after reports of a shooting on March 22, 2021. (Photo by Matthew Jonas/MediaNews Group/Boulder Daily Camera via Getty Images)

In 2021, there were a total of 61 active shooter incidents across 30 states, resulting in 103 people killed and 140 others wounded. The most occurred in the country's most populous state of California (6), followed by Georgia (5) and Texas (5). Four incidents each occurred in Colorado and Florida, the FBI said.

Among these shootings was one at an office building in Orange, California, and another at a grocery store in Boulder, Colorado.

June had the highest number of active shooter incidents (12), followed by April (10) and August (7). Most incidents were reported on a Saturday, followed by a Tuesday or Thursday, the agency’s data shows. A majority (32) of the 2021 shootings happened in "areas of commerce."

10 killed, including officer in Boulder Massacre at King Soopers

Boulder Police Department officials announced that ten people were killed, including one officer at a shooting at a King Soopers in Boulder, CO on Monday.

The FBI defines an "active shooter incident" as one or more individuals who "actively engage in killing or attempting to kill people in a populated area." The definition implies the use of a firearm, and the "active" part of the term refers to the "ongoing nature of an incident, and thus the potential for the response to affect the outcome."

Certain gun-related incidents are excluded from the data, including those that were the result of self-defense, gang or drug violence, domestic disputes, and hostage situations.

The FBI also noted in its report a concerning "upward trend" of active shooter incidents in the U.S.

A mass shooting earlier this month at a grocery store in Buffalo, New York, left 10 people dead. Authorities said the alleged shooter purposely targeted a predominantly Black neighborhood. The incident left many channeling the same grief and anger of several other communities across the U.S. reeling from such tragedies.

"You expect us to keep doing this over and over and over again — over again, forgive and forget," the son of 86-year-old Ruth Whitfield, one of the 10 people killed, told the Associated Press last week.