This might be the wildest story you hear all day. Reports of a mystery person in a jetpack-- flying high above Los Angeles-- and right in the path of incoming jets at LAX.

LOS ANGELES - The FBI will be investigating an incident that took place near Los Angeles International Airport after an American Airlines pilot reported seeing a mystery person in a jetpack flying in the path of incoming jets Sunday evening.

"The FBI is aware of the reports by pilots on Sunday and is working to determine what occurred," a spokesperson told FOX 11 on Tuesday.

The American Airlines pilot reported via radio to the control tower seeing a "guy in a jetpack" as he was approaching LAX at about 3,000 feet and ten miles out for a landing. In the video on this story, you can listen to the actual call to the control tower.

A second pilot also saw the incident. The plots reporting it using 'visual flight rules', meaning there was plenty of visibility, and it wasn't dark at the time.

Based on research, jetpacks can fly that high but is pretty uncommon. There's an assumption that people with the technical and financial ability to fly at this extreme height and near an airport would also understand the regulations around flying in LAX's flight path.

One theory suggests that the incident could be an internet or social media stunt.

No one has come forward to say they were flying a jetpack, and normally the promotional or fun videos we’ve seen of them are much lower in the sky, aimed at vacationers or thrill-seekers who blast off with a pack attached to their backs for a few seconds of low-level flight.

Efforts to find out more from the pilot went nowhere, and representatives from American Airlines told FOX 11 to contact the FAA.  The FAA said they turned the report over to the LAPD for investigation, possibly trying to locate the person via a helicopter or ground patrol.  The LAPD says they performed a flyover in the area but were not able to locate anyone that matched that description.

Two retired pilots who currently teach and consult on aviation safety say they would absolutely believe the pilot in that situation, given their trained eyes and visual awareness.

The pilot estimated the jetpack was only about 300 yards out of his window. 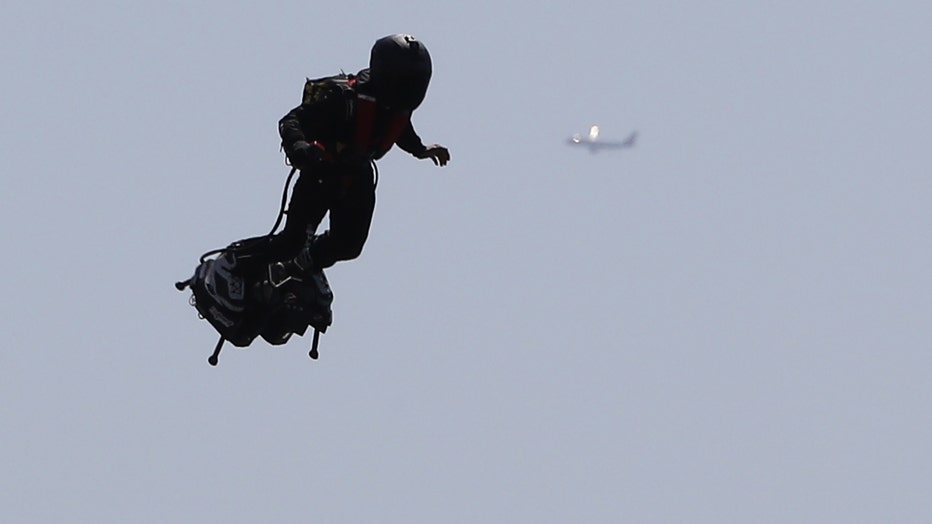 File photo of a person with a jetpack. (Photo credit: VALERY HACHE/AFP via Getty Images)

For now, it’s a mystery on many levels. Some are suggesting it was a mylar balloon or a small helicopter. Years ago a man in a lawn chair flew aloft with dozens of helium balloons tied to it.

All this is a very puzzling and potentially dangerous mystery,  as you can imagine the consequences of that kind of mid-air collision.

If you have any information related to this story, please call the LAPD.