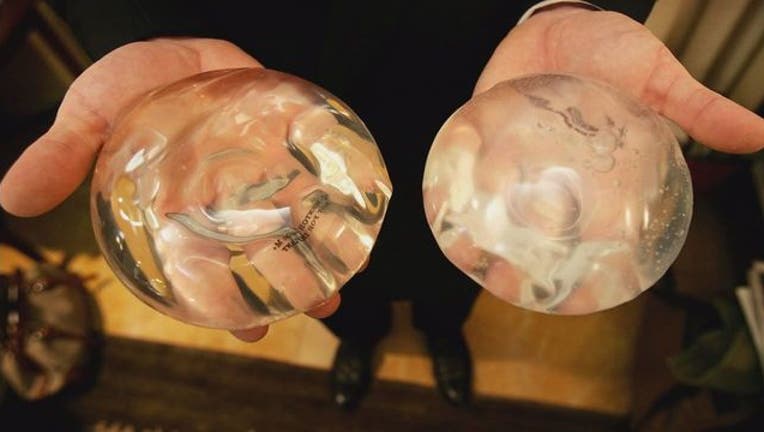 WASHINGTON (AP) - U.S. health officials are telling doctors to be on the lookout for a rare cancer linked to breast implants after receiving more reports of the disease.

The Food and Drug Administration sent a letter Wednesday to family doctors, nurses and other health professionals warning about the form of lymphoma that affects breast implant patients. In suspected cases, the FDA recommends laboratory testing to confirm or rule out of the disease. It's the first time regulators have issued a direct warning to doctors other than plastic surgeons.

The disease is not breast cancer, but usually forms in the scar tissue that forms around implants. The earliest signs of the disease are usually lumps, swelling and pain around the breasts. Patients will often seek care from their primary physicians, gynecologists or other health practitioners, rather than a plastic surgeon, FDA noted.

"Having everyone informed about this is in the best interest of the patient," said FDA spokeswoman Stephanie Caccomo.

The cancer usually grows slowly and most patients are treated with surgery to remove the implant.

The FDA has been tracking reports of the cancer for years and officially confirmed its link to breast implants in 2017. The latest update comes as health experts around the world attempt to gauge the cancer's frequency and whether extra restrictions are warranted on certain types of breast implants. The FDA is holding a two-day meeting next month on the safety of breast implants.

FDA officials said they have identified 457 likely cases of the cancer since 2010, including nine patient deaths. In each of these cases the disease was diagnosed by a physician or through laboratory testing. The FDA also said it received nearly 250 new reports of the disease in the last year, though many were duplicate reports or missing key information. The updated numbers still reflect a rare disease, considering 400,000 U.S. women receive implants annually.

There is no firm agreement on the exact frequency of the disease, known as breast implant-associated anaplastic large cell lymphoma. Published estimates ranging from 1 in 3,000 patients to 1 in 30,000 patients.

The FDA's efforts to monitor problems with breast implants have long been hampered by its system for tracking injuries and malfunctions with medical devices. The decades-old electronic database relies on hand-typed submissions from companies, doctors, patients and lawyers that often include incomplete, unverified information. As a result, the FDA data is generally understood to be an incomplete snapshot of problems.

The FDA warning applies to all types of breast implants; they contain either saline or silicone. Experts in the U.S. and abroad have focused on a particular style known as textured implants. They have a sandpaper-like coating, designed to keep the implants from shifting out of place. Those are a small segment of all breast implants used in the U.S., said Dr. Alan Matarasso, president of the American Society of Plastic Surgeons.

"The vast majority - if not all of the cases - have been in patients that at some point had some form of a textured implant," Matarasso said.

In November, French health regulators recommended surgeons stop implanting textured implants until more is known about their links to the lymphoma. They are meeting this week to discuss textured implants.

Breast implants have long been subject to high rates of complications, including wrinkling, scarring, pain, swelling and implant rupture. The FDA estimates 1 in 5 women getting them for cosmetic reasons need to have them removed within 8 to 10 years.