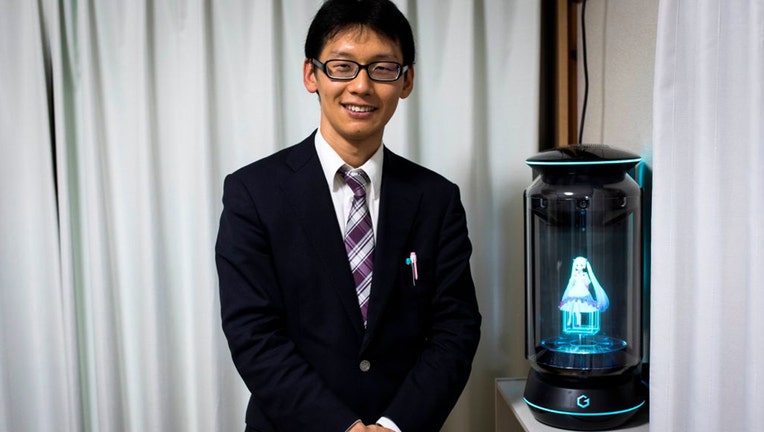 In this photograph taken on November 10, 2018 Japanese Akihiko Kondo poses next to a hologram of Japanese virtual reality singer Hatsune Miku at his apartment in Tokyo, a week after marrying her. (BEHROUZ MEHRI/AFP via Getty Images)

NEW YORK - A Japanese man who married a fictional, computer-synthesized pop singer four years ago now says he can't communicate with her but still loves her.

According to the Japanese newspaper The Mainichi, Akihiko Kondo, 38, said he hit a technical roadblock with Hatsune Miku after the company that provides the artificial intelligence and hologram to communicate with her was no longer providing the service.

Kondo would communicate with Miku using a three-dimensional hologram of the pop singer projected into a cylinder.

"My love for Miku hasn’t changed," he told Mainichi. "I held the wedding ceremony because I thought I could be with her forever." 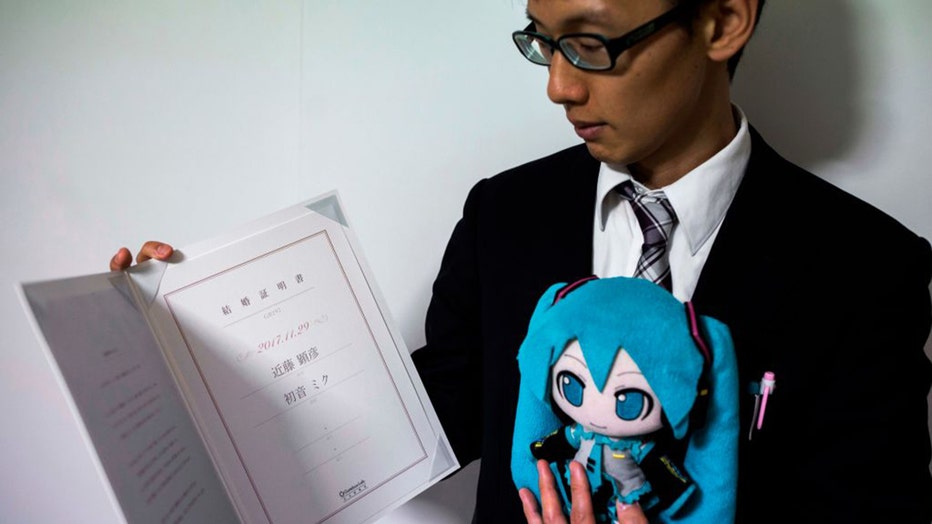 In this photograph taken on November 10, 2018 Japanese Akihiko Kondo poses with a doll of Japanese virtual reality singer Hatsune Miku, as he shows their marriage certificate, at his apartment in Tokyo, a week after marrying her. (BEHROUZ MEHRI/AFP v

Kondo, who lives in suburban Tokyo, identifies as ‘fictosexual'- someone who is sexually attracted to fictional characters. He has shared details about his relationship with the world to promote the growing lifestyle.

"It's not that people can't live in society because they're engrossed in a two-dimensional world, but rather, there are cases where people become captivated as they search for a place for themselves in video games and anime, because reality is too painful for them. I was one of those people," said Kondo to Newshub.

Kondo continues to keep a life-sized version of Miku in his home.  When he proposed to the blue-haired character she replied, "I hope you'll cherish me."