Team coverage with the latest from Crockett where the NuStar facility, an energy facility that stores crude oil, caught fire, prompting a health hazard emergency, and a freeway shutdown.

CROCKETT, Calif. - A stubborn fire at a petroleum storage facility in Crockett was finally contained late Tuesday night after repeated flare ups since it began some seven hours earlier.

According to Contra Costa County Fire Protection District, the fire was contained just before 9 p.m. About a half hour later, Contra Costa Health Services said that a shelter-in-place ordered for the surrounding area had been lifted. As a precaution, however, schools in the John Swett Unified School District will be closed on Wednesday.

The fire spewed heavy orange flames and massive black smoke into the air, triggering a widespread emergency response and freeway closures including both directions of Interstate 80 through midnight between Highway 4 and the Carquinez Bridge toll plaza.  No injuries have been reported, but some evacuations were ordered. The cause has not yet been determined.

The fire started about 2:15 p.m. at NuStar Energy, a company that stores and distributes crude oil, refined products and specialty liquids. Contra Costa County fire officials confirmed that two tanks containing low volumns of ethanol and jet fuel went up in flames. One tank contained about 167,000 gallons of the chemical. That amount of liquid would fill about seven average-sized swimming pools.

Firefighters used foam and water to attack the blaze and used water to cool adjacent tanks that were not burning.

Shortly after the fire broke out, the Contra Costa County Sheriff declared the fire a "hazardous materials emergency" in both Crockett and nearby Rodeo. Deputies said residents should close all their windows and doors, and turn off heaters and air conditioners. An advisory for those with respitory issues in the City of Benicia was lifted at 6:30 p.m. right around the time of the evening flare up due to improving conditions.  The Contra Costa County Sheriff's Office provided a map where the shelter-in-place was in effect.

As the fire was raging, Bay Area Air Quality Management District spokeswoman Tina Landis said the agency was sending an inspector to the site to determine if there were any pollutants. Before the fire, she said that the air quality was "good." 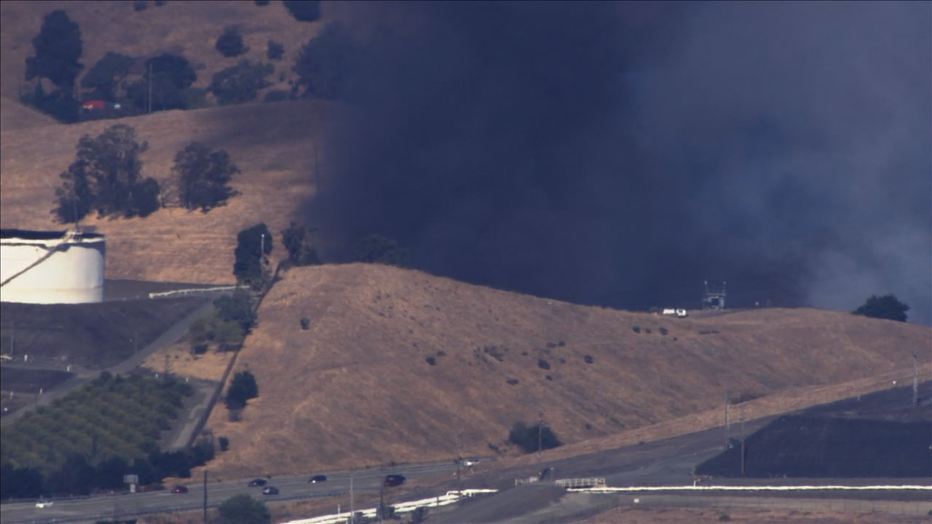 NuStar Energy L.P. is a publicly-traded master limited partnership based in San Antonio, Texas. On its company website, it says it is one of the largest independent liquids terminal and pipeline operators in the nation.

The company released the following statement:

NuStar is working with first responders to extinguish a fire at its Selby Terminal in #Crockett. There are two impacted tanks, which were holding very low volumes of ethanol – less than 1 % of tank capacity. All personnel are safe and accounted for. NuStar immediately enacted its emergency response procedures. Adjacent tanks are being cooled to minimize the risk of the fire spreading. We have contacted all regulatory agencies."

NuStar currently has approximately 9,800 miles of pipeline and 74 terminal and storage facilities that store and distribute crude oil, refined products and specialty liquids. The partnership’s combined system has approximately 74 million barrels of storage capacity, and NuStar has operations in the United States, Canada and Mexico, according to the company.

Hercules Mayor Dan Romero said that he drove by the flames and thought it was pretty scary to see the tanks fully engulfed in fire. He also was dismayed that so many people stopped their cars on the side of Interstate 80 to take video of the fire. "They don't realize there could be an explosion and the chemicals coming off of it," he said.

Additional units responded to a five-acre vegetation fire that surrounded the burning petroleum tanks at the facility.  The vegetation fires ignited by the refinery fire at NuStar Energy's tank farm are holding at 15 acres and have been 75 percent contained, according to Cal Fire.