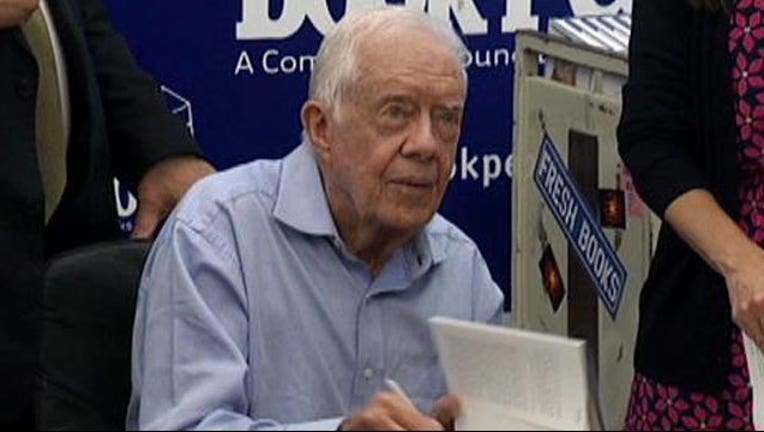 Saturday, former U.S. President Jimmy Carter made a stop in Austin to promote his new memoir "A Full Life: Reflections at Ninety."

Hundreds of fans in Austin waited in line at Bookpeople to meet the man behind the pen.

"I admire him for all the things he's done since he got out of his presidency, a lot of the humanitarian things he's done, I think he's raised the bar really high," said Timothy Abbott.

The book is a collection of Carter's memories from childhood in Georgia to the White House and beyond. Saturday, the former President signed his name to hundreds of copies wearing a smile the entire time.

"I will treasure this forever," Becky Chambers said holding the autographed book.

Carter was the 39th President of the United States, serving one term from 1977 to 1981. He is the second oldest living U.S. President after George H.W. Bush.

"He's got a great smile and I can't wait to read this book. I mean 90 years on this planet. And we were saying on the way in, 'I'd be proud if I were part of one of his accomplishments he's had,' and he's done so much, and he doesn't seem to be slowing down, it's utterly amazing," said Chambers

Carter's supporters said after his presidency ended, he wrote the book on humanitarian efforts. They hope today's politicians take a page out of it.

"Just really an honor regardless of what you think of his politics. Just so much he's done for humanity and so it's really great I had the opportunity," said Lon Breitenvich

"And I think people from both parties can hear that message and resonate with it," said Abbott.

The American public is on the same page. A recent Gallup poll shows Americans have less confidence in the government than ever before.

People tell FOX 7 they hope the 2016 presidential frontrunner will change that.