NEW YORK - GasBuddy analyst Patrick DeHaan argued on Monday that the price at the pump is soaring due to increased demand coupled with the fact that the Organization of the Petroleum Exporting Countries (OPEC) "is not opening the spigot."

DeHaan was referencing the fact that last week, OPEC leaders and their allies agreed to maintain production cuts for all countries except Russia and Khazakstan. The news caused West Texas Intermediate crude oil, the U.S. benchmark, to spike.

DeHaan provided the insight on "Mornings with Maria" on Monday, adding that he believes gas prices could increase even more by the spring.

He noted that "U.S. oil production is still over 2 million barrels lower than last year" and that "OPEC is continuing its production cuts, not increases."

"Just in the last week alone after OPEC announced those extensions to the cuts, oil prices jumped another 12%," he added.

Brent crude oil reached $71.38 per barrel overnight after Yemen’s Houthis launched a drone attack on Saudi Arabia’s oil facilities. Prices have since pulled back with Brent trading up 25 cents at $69.61 per barrel. West Texas Intermediate crude oil, meanwhile, gained 27 cents to $66.36 per barrel.

The attacks in Saudi Arabia follow a devastating winter freeze in Texas and other parts of the country last month, which knocked out production of about 4 million barrels a day of U.S. oil, pushing prices above $60 a barrel for the first time in more than a year.

The recent rally in oil markets has pushed crude prices to their highest levels since near the start of the coronavirus pandemic, fueled by recovering gas demand and production cuts. 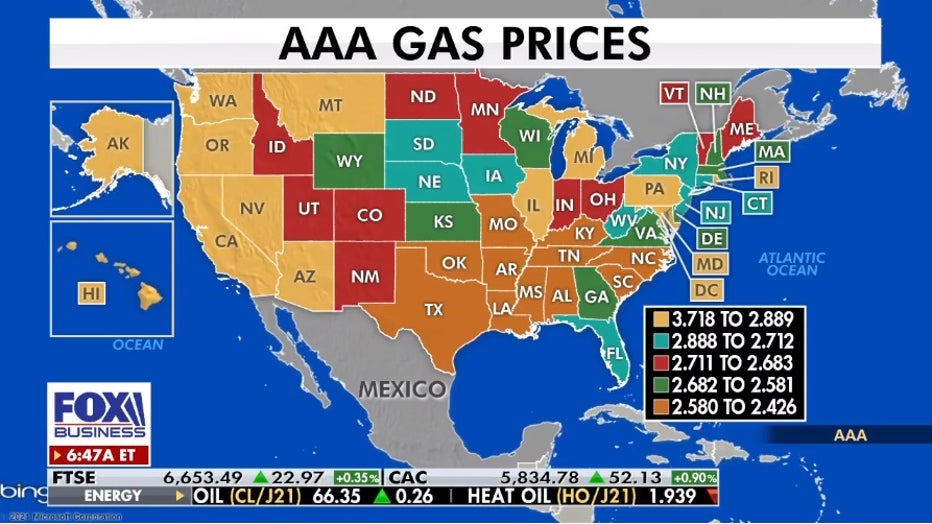 If the current trends continue alongside higher crude prices, "drivers can expect incremental price increases — of at least nickel — at their local gas stations in March," according to a AAA news release.

Gas prices have been increasing at the pump for the past few weeks, reaching a national average of $2.77 a gallon as of Monday, which is 39 cents higher than the same time in 2020, according to AAA.

DeHaan noted that "Americans are getting out more" and the global recovery from the pandemic, "coupled with the fact that OPEC simply is not opening the spigot," are all factors contributing to the rise in prices at the pump.

DeHaan said that the fact that Americans are "really starting to get out more and more" as well as "the attack on the Saudi’s and last week’s OPEC decision not to raise oil production is really causing gas prices to soar."

He also predicted that drivers could see a national average of $3 "as early as April."

DeHaan also said, "We could see gasoline demand this summer start to approach some of those normal levels, especially … if there is pent-up demand."

"Americans have been locked down for a long period of time, a lot of them [are] really trying to get out," he went on to explain. DeHaan noted that "stimulus is on the table."

Over the weekend, the Senate narrowly passed President Biden’s $1.9 trillion coronavirus relief plan in a key vote that puts new stimulus checks and expanded unemployment checks one step closer to the pockets of the American public. The legislation now heads back to the House where a vote is scheduled for Tuesday.

DeHaan pointed out that the more state reopen and the more people get vaccinated, the more demand for gas will likely increase.

"I think you could see some of the very higher demand levels that we would have anticipated this summer if that happens and that could bring with it even higher [gas] prices," he stressed.

For the oil industry, which had lost billions of dollars during the coronavirus pandemic, rising gas prices are a benefit.

Oil prices crashed as millions of people stayed home and avoided traveling in an effort to prevent getting infected.

Oil futures briefly traded below $0 a barrel last spring before settling around $40 a barrel for months, well below what most producers needed to stay afloat.

Many U.S. producers cut production significantly, others filed for bankruptcy protection and workers in the industry lost thousands of jobs.