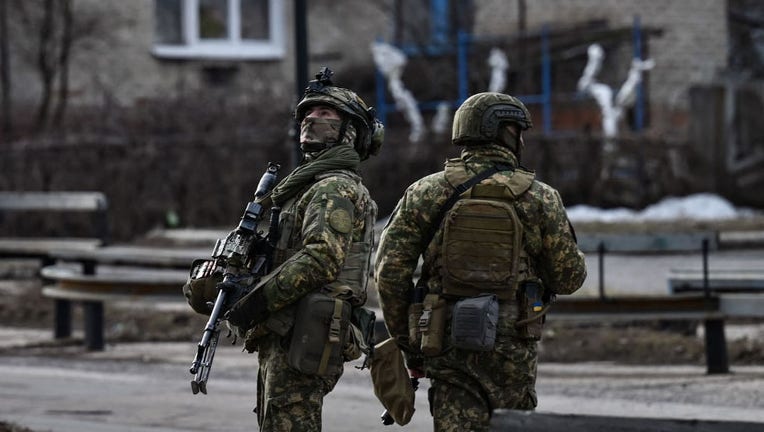 Ukrainian troops patrol in the town of Novoluhanske, eastern Ukraine, on February 19, 2022. (Photo by ARIS MESSINIS/AFP via Getty Images)

Twitter users shared videos Friday of a MiG-29 fighter jet flying through the skies over Ukraine, which led to widespread reaction on social media.

@KhaledEibid wrote "This Ukrainian Pilot is becoming a legend in Kyiv, He has successfully challenged 6 Russian pilots alone.. They are calling him the "Ghost of Kyiv." #UkraineInvasion#Ukrainian."

"That's the we hero, the hero of Ukraine #ghostofkyiv," @Danielgaay wrote on Twitter.

A "flying ace" is a fighter pilot who has downed at least five enemy aircraft, a feat that hasn’t been accomplished in Europe since World War II. 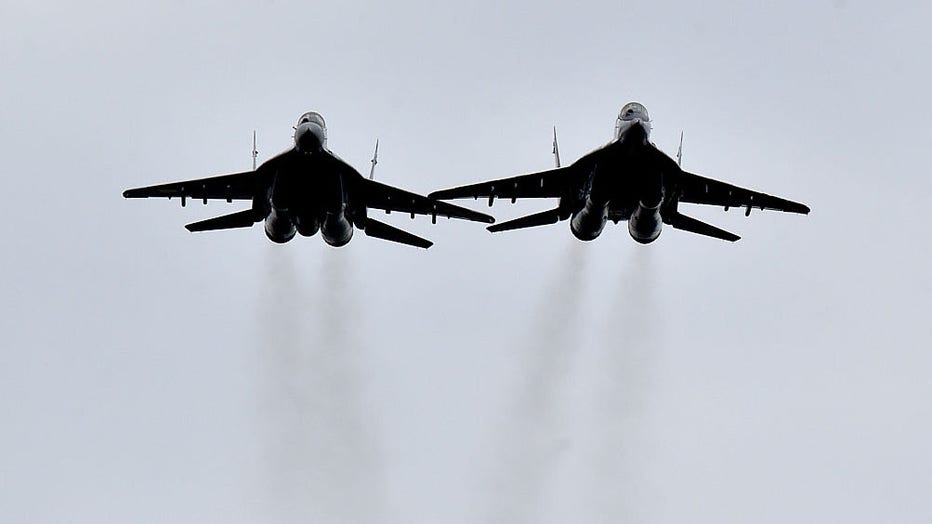 FILE: Ukrainian fighters MIG-29 (NATO reporting name "Fulcrum") take part in the practical flights to fulfill the system of combat duty during the exercises at the Air Force military base. (SERGEI SUPINSKY/AFP via Getty Images)

"The Ghost of Kyiv is my new favorite Ace Combat protagonist," @NoobPTFO wrote.

@abhinavsoni83 added: "A new hero arises. A warrior who shot down 6 enemy aircrafts in a single day making them the first Flying Ace of the 21st century earning the nickname of ‘The Ghost of Kyiv.’" #ghostofkyiv #UkraineInvasion #FreeUkraine

Another Twitter user said "Whoever the ghost of Kyiv may be, I salute them. And to everyone in Ukraine, we are with you."

At least one of the viral videos has already been debunked by Snopes.com as a video game simulation.

Although the Ghost of Kyiv cannot be substantiated — it’s not certain how many Russian jets were downed, or how many Ukrainian pilots were actually involved — it appears this urban myth has generated a hero for some amid the ongoing Russian invasion of Ukraine.

Thousands of Ukrainians crossed into neighboring countries to the west in search of safety as Russia pounded their capital and other cities with airstrikes for a second day.

Most of those arriving on Friday were women, children and the elderly after Ukraine's President Volodymyr Zelenskyy on Thursday banned men of military age from leaving the country.

Ukrainian President Volodymyr Zelenskyy said that 137 "heroes," including 10 military officers, had been killed. The Ukrainian military said it has killed over 1,000 Russian troops while fending off Moscow’s invasion. The Russian military hasn’t reported any casualties during the attack. Neither claim could be independently verified.