POLK CITY, Fla. - Dustin Hooper, the owner of All Creatures Wildlife Control, dropped everything when he received a call from a frazzled Polk County woman saying a five-and-half-foot rattlesnake got into her chicken coop.

"When you get a call about a venomous snake, you can’t take a chance," Hooper explained. "So, boom, I got to go."

The woman discovered the unwelcome guest when she was doing a routine check on her chickens.

"I was just so scared," said Silva Miralles. "I was shaking for hours."

When Hooper got to Miralles’ house, deep in the Green Swamp, he didn’t waste any time. "That is the biggest rattlesnake I have ever seen in the wild, ever," he exclaimed. "I didn’t try to do the old, big, bad, ‘Billy Boy’, and just grab it and pull it out," he explained.

He quickly whipped out his snake tongs because he knew he had one shot at having the upper hand. He used the tongs at just the right moment to grab it by the back of the neck.

Hooper was able to carefully dump him into a bucket and get a good look. At close range, he was able to estimate the snake’s age by counting the number of rattles on his tail, about one per year. There were ten. 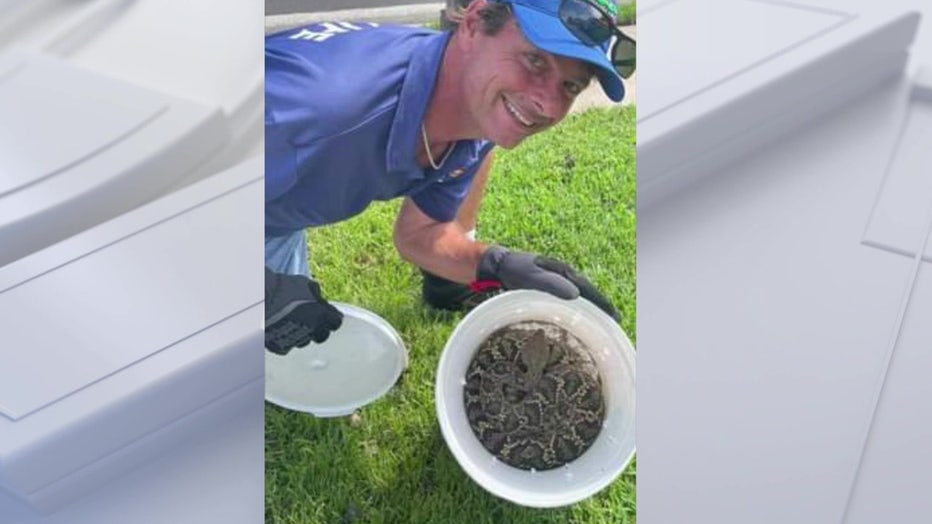 "Believe me, I wanted to hold it. I wanted my fiancée to get a picture of me holding it up, but if I had gotten bit, three weeks before my wedding, I would have never heard the end of it," he said.

So he took the smart way out and brought the snake to a 1,000-acre ranch and let it go with the owner’s permission, where probably no one, including his wife to be, will ever see it close up and personal again.