UVALDE, Texas - Almost 300 high school seniors received their diplomas Friday in Uvalde in the shadow of the massacre of 19 elementary school students and two teachers one month earlier.

The 288 red-gowned Uvalde High School seniors sat in 100-degree heat at the school stadium on the one-month anniversary of the mass shootings. Before them were arrayed 21 "Uvalde Strong" placards, representing those killed, as school and student leaders spoke.

Uvalde school Superintendent Hal Harrell and school principal Randy Harris praised the students for their strength and resilience through three COVID-19 pandemic years, three changes of principals and then the May 14 mass shooting at the South Texas town’s Robb Elementary School. 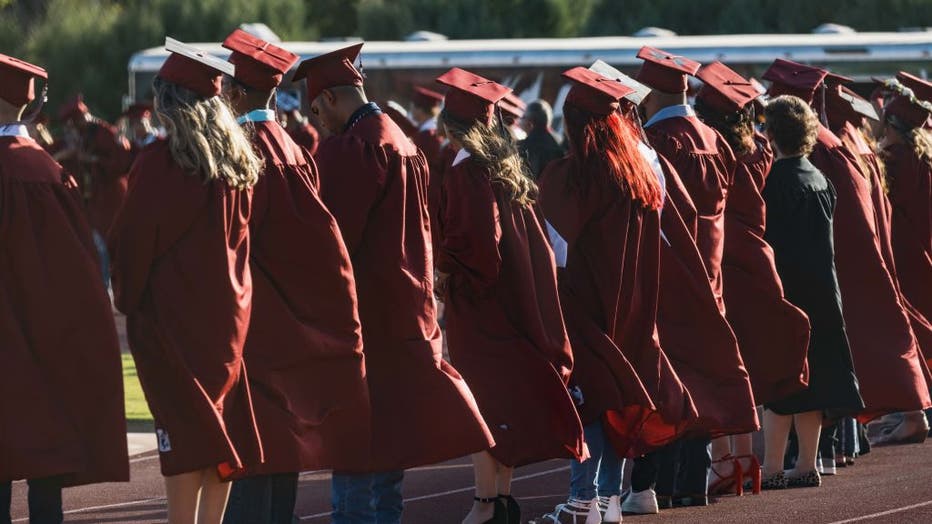 UVALDE, TX - JUNE 24: Students line up for the Uvalde High School graduation ceremony on June 24, 2022 in Uvalde, Texas. Nearly 300 Uvalde High School seniors received their diplomas one month to the day after nineteen children and two adults were ki

"Love the people in your life while you have them because you don’t know what the future holds for anyone," class valedictorian Abigail Kone said in her address.

"Our community has definitely learned about the unexpected. Something that should have never happened happened. Our lives have been altered. But we still stand together as a community," she said.

After reading off the names of the 19 slain children and teachers, Kone said, "These loved ones of families were taken too soon. They won’t be given the opportunity to follow their dreams or watch their families grow up.

"So tonight, I would like to include these children of Robb Elementary as honorary members of the Class of 2022 family," she said to prolonged applause.

The community is mourning the victims of last week's school shooting as funerals start this week. All of this, along with growing outrage over what appears to be a bungled response to the mass shooting by local law enforcement.