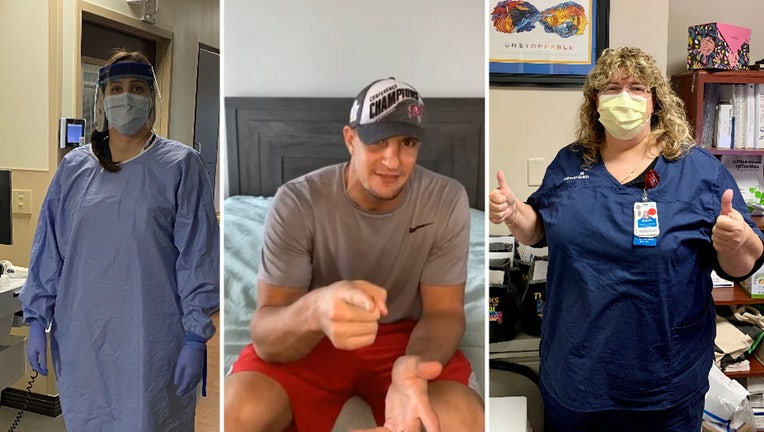 TAMPA, Fla. - The Tampa Bay Buccaneers are heading to the Super Bowl, and two Bay Area health care workers will be in the stands after being surprised with tickets by Gronk himself.

Belinda Spahn is a critical care unit nurse at AdventHealth North Pinellas, and was charged with caring for the first COVID-19 patient to be admitted to the ICU back in April of 2020. That patient, Charles Thompson, pleaded with Spahn, "Please don't let me die."

The hospital says Spahn cared for Thompson while praying with him and "reassuring him to lean on his faith." Thompson had to be intubated for six days, but after spending 17 days in the hospital, he survived and was discharged. Staffers sang "Lean on Me" to Thompson as he was wheeled out of the building.

"I've heard some amazing things about you and about how you've been a source of strength for patients in the ICU during this pandemic and I just want to let you know that the work you do is nothing short of remarkable," Gronk told Spahn in his video message. "There's so much that wouldn't be possible right now without you and it means the world to so many."

Joining Spahn at the big game will be Heather Stegmeier, an infection control manager at AdventHealth Wesley Chapel. The hospital said she played an integral role in educating and assisting team members in obtaining and properly using personal protective equipment.

"I hear you have a very important job in the hospital, and keeping people safe," Gronk said in his video message to Stegmeier. "Your hard work hasn't gone unnoticed."

The two will be among thousands of other frontline workers who have been invited to the Super Bowl on Sunday at Raymond James Stadium.

The NFL will allow 22,000 fans to attend the big game, about one-third of what the stadium normally holds. In the crowd will be 7,500 vaccinated health care workers.

According to the NFL, the majority of the 7,500 health care workers at the game will come from hospitals and health care systems in Central Florida.

In addition, all 32 teams are choosing vaccinated health care workers from their own communities to send to the game.