La Politica, is a progressive, non-partisan group whose focus is getting the young Latino community civically engaged.

AUSTIN, Texas - As the November election of 2020 gears up, many Hispanics say Democrats and Republicans alike are missing the mark on appealing to the Latino voter.

In Texas, 1.8 million immigrants are eligible to vote, 52 percent of those are Hispanic, according to the Pew Research Center. In Texas, 7 in 10 of those voters have lived in the U.S. for more than 2 decades.

Now, a group of Austin friends are using those facts to focus their efforts on getting Latinos to the polls themselves. La Política is a progressive, non-partisan group whose focus is getting the young Latino community civically engaged.

Diana Gómez, one of the founders, says it’s a mission she feels a duty to take on.

“I didn’t see myself reflected in politics, [so I had to] knock down the door, make a table, whatever I had to do to get in there and not only work towards defining my own rights but the rights of my community as well,” Gómez says. “The beauty of, La Política, is me doing that but doing it with friends, doing it with other young women, and seeing how empowering it is to do it all together.”

Her latest project as part of La Política is focusing on culturally relevant graphics to help get the message out about voting, like one about Walter Mercado, a Puerto Rican astrologer who offered hope to millions of immigrants. 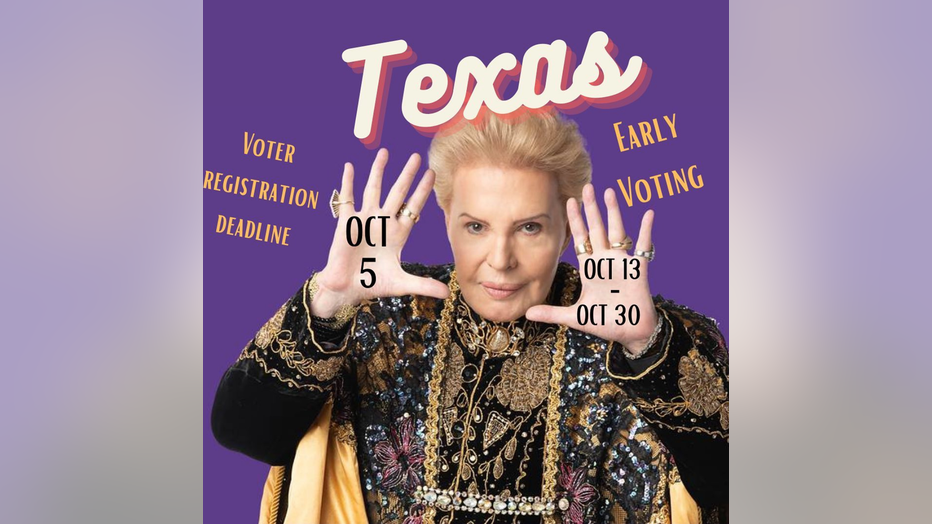 Walter Mercado was a celebrity psychic and an international phenomenon.

“So, Walter Mercado is amazing,” Gómez says. “He’s so iconic and so important to us and I just found a graphic of him online. And let folks see through his hands, the deadline for voter registration is October 5th.”

It’s these small bits of connection with her people, Gómez says are needed.  “There’s a particular audience that would pay more attention to this than others right?” Gómez said. “And to show through his hands what are these important dates from such an important man.”

Now, with La Política, she says their work is just beginning.

“Three of my Latina friends and I co-founded this, Sarah, Phoebe Denise, we’re all young professionals in Austin and we all care about voting and we know it’s important but even amongst ourselves we don’t know everything,” Gómez admits.

“This is what I do when I go on my walks, I feel like I don’t have times for walks since I’m involved in so many things,” Gómez says. “So, I just bring my phone with me, so I work while I'm walking, I’m out getting air but I'm still catching up on messages, drafting an email.”

The question you may have is “why”, why spend every moment getting people to vote?

“I think the reason I’m involved so much is I feel there’s so much work to catch up on where a lot of young Latinx people aren’t as involved in and haven’t been given the opportunity to be involved in,” Gómez said.

Now, she’s on a path that for her is a matter of life or death.

“It’s not enough to just sit somewhere and complain about what’s going on,” Gómez says as we walk in her North Austin neighborhood with immigrant construction workers as a backdrop working on new home construction nearby. “Since I have the right to vote it’s my duty, since I am able to speak more than one language it’s my duty to communicate this message in more than one language, I have a duty to defend my community and honestly to defend the rights I have at this moment knowing that I might not have these same rights in the future depending on how elections go.”

La Política is on Facebook and Instagram. Founders say they welcome anyone to join in their virtual events.