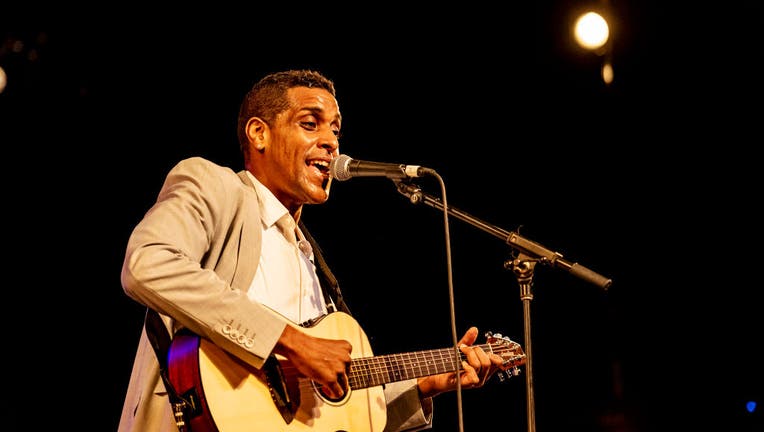 Haitian musician Mikaben (born Michael Benjamin) plays guitar as he performs (as a special guest with Emeline Michel & her band) during the World Music Institute's 'Eritaj' ('Heritage') concert, in celebration of Haitian Heritage Month, at Sympho

PARIS - Michael Benjamin, a Haitian singer known by "Mikaben," has died after collapsing during a performance in Paris over the weekend. The musician was 41.

Mikaben was performing with his band CaRiMi when he walked to the back of the stage following his performance.

"I am devastated by the news of the sudden death of the young and very talented artist Michael Benjamin ‘Mikaben’. It is a great reference of Haitian music which has just passed away," he wrote.

The venue where Mikaben was performing, Accor Arena, also took to Twitter on Sunday to confirm the tragic news.

"Last night during the Carimi concert, one of the singers, Michael Benjamin, Mikaben of his artist name died following a malaise on stage and despite the intervention of the emergency services," the account shared in French.

According to the Miami Herald, singer Mickael Guirand, asked everyone at the venue to leave following Mikaben’s collapse.

"End of the concert. We must evacuate the room," Guirand said.

"It’s very complicated,’" he added, per the outlet. "We need prayers [for Mikaben]."

The outlet also noted that concert goers fainted in the room.

"This is a shock," the three-time Grammy winner said. "All I could remember was his smile," Jean continued. "This is one of the most influential and inspirational young artists of our generation."

"I’m in disbelief," CaRiMi singer Roberto Martino told the Herald. "This is somebody I was working with for years and considered a brother, a good friend. We talked almost everyday. We have a chat together."

Martino told the outlet that he was with Mikaben before the show, and he seemed to be in good spirits.

"He was so happy. He couldn’t wait to get on that stage with CaRiMi. It was one of his biggest accomplishments in life. It’s a band that he idolized. I’m at a lost for words. I’m broken," Martino said.

"Mika was one of the most talented artists that I had ever met in my life," he added. "One of the most humble guys; you never heard him being mad or cursing at anybody. It’s just sad; unbelievable."

Mikaben’s wife, Vanessa Benjamin, took to Instagram to thank fans for their prayers, but asked loved ones to "please stop calling."

"I’m in no condition to talk," Benjamin, who is pregnant with their third child, wrote. "I lost my other half and I have no words."

She shared a video of the couple dancing together and wrote, "My sweet love, How did God manage to be without you for 41years?????"

Mikaben is survived by his wife and two children.