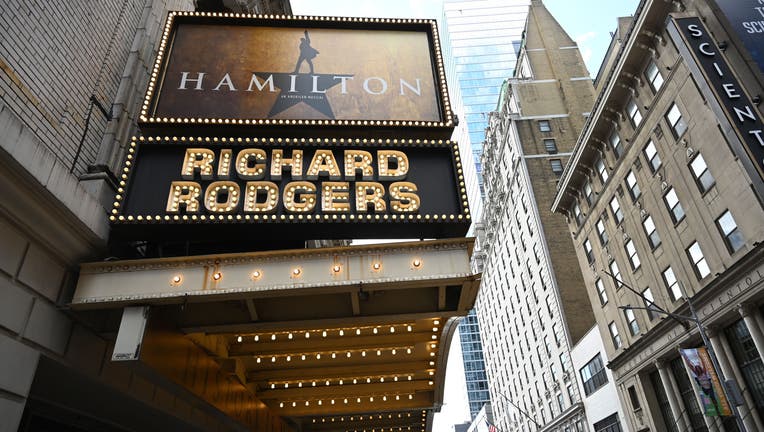 The Richard Rodgers Theatre is seen on June 6, 2019 (Photo credit should read TIMOTHY A. CLARY/AFP via Getty Images)

The cast of Broadway’s hit musical "Hamilton" is raising a glass after getting references in Amanda Gorman’s poem recited at President Joe Biden’s inauguration Wednesday.

"Did you catch the 2 @HamiltonMusical references in the inaugural poem? I couldn’t help myself!" Gorman, 22, tweeted Lin-Manuel Miranda, the show’s creator, writer and star.

Gorman is a native and resident of Los Angeles and the country's first National Youth Poet Laureate. It was an extraordinary task for Gorman, who soon after finishing her poem helped inspire — along with Vice President Kamala Harris — the Twitter hashtag "#BlackGirlMagic and was being praised by former first lady Michelle Obama among others.

Gorman is the youngest by far of the poets who have read at presidential inaugurations since Kennedy invited Robert Frost in 1961, with other predecessors including Maya Angelou and Elizabeth Alexander. Mindful of the past, she wore earrings and a caged bird ring — a tribute to Angelou's classic memoir "I Know Why the Caged Bird Sings" — given to her by Oprah Winfrey, a close friend of the late writer.

Meanwhile, Miranda will contribute a classical recitation as part of the "Celebrating America." The prime-time special which will air Wednesday night and stream live on multiple channels including NewsNOW from FOX, will include performances by Demi Lovato, Justin Timberlake, Ant Clemons and Jon Bon Jovi. Biden and Harris will also give remarks.

Hamilton is currently not playing on Broadway due to the COVID-19 pandemic. Although an exact date for various performances to resume has yet to be determined, Broadway producers are now offering refunds and exchanges for tickets purchased for shows through May 30.