The goal of the office is to reduce those extraordinarily long pretrial detention times, and improve the justice system for low income families

HAYS COUNTY, Texas - On Tuesday, Cyrus Gray III stood before the Hays County Commissioner's Court and cried as he explained that Thursday will mark the first Thanksgiving he’s spent with his family since 2017.

"I'm sorry we failed you as the county and I will continue to fight for you and everyone else that is voiceless in our community," said County Judge Ruben Becerra, as he was fighting his own tears.

Gray was released on bail last week. He was in commissioner’s court successfully advocating for the creation of a county public defender’s office.

The Texas State graduate was held for nearly five years pretrial in the Hays County Jail. He said his story is "not unique."

Gray was a 23-year-old physical therapy technician and personal trainer when he was arrested in 2018 for the murder of Texas State student Justin Gage. He has always maintained his innocence.

Gage was killed in 2015 in what San Marcos police believe was a drug-related robbery. According to police, three masked men broke into Gage’s San Marcos apartment and one of them shot him.

Gray said his first public defender met with him only "two to three times" in a nearly three-year time span. He said the attorney repeatedly told him to take a 45-year plea deal.

"There's a lot of change that has to come. Unfortunately, this system is how it is on purpose. It's no accident what's going on," said Gray.

In September, writer Melinda Rothouse published an article in the Texas Observor about her experience serving as a juror on the case.

She wrote, "…the evidence presented against him seemed flimsy at best—no weapon, no fingerprints, no DNA, no identifying witnesses, no surveillance footage, no motive, nothing actually connecting him to the crime. The prosecution’s case relied almost exclusively on cell phone tower data known to be unreliable, particularly from that time period. After years of being held without a conviction, it appeared this man might now be convicted without evidence. And no one in the courtroom—not the state, the defense counsel, or the judge—seemed alarmed. There was an eerie normalcy to the palpable callousness playing out before our eyes."

"My trial was terrifying… because I'm sitting in this courtroom, and it seemed like everybody is okay with what's going on right now. And for me, that was a big problem. Because I'm sitting in this courtroom fighting for my life and there's no sense of urgency or real sense of just passion for trying to make sure the right thing happens at the end of this," Gray told FOX 7 Austin in his first television interview. 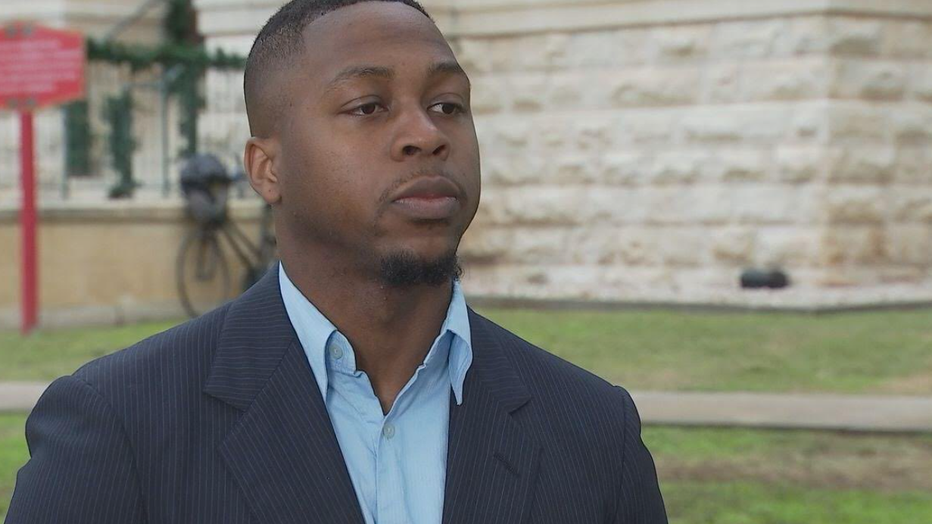 Gray was a 23-year-old physical therapy technician and personal trainer when he was arrested in 2018 for the murder of Texas State student Justin Gage. He has always maintained his innocence.

Tuesday commissioner's court voted unanimously to create a public defender's office in the county. Gray believes it is a good first step to ensure adequate representation for all and cut down the county’s long pretrial detention times.

"Court-appointed attorneys are overloaded with cases and have such a lack of resources that the expectation of adequate, fair defense seems impossible," said Gray.

As of November 20, the median length of pretrial detention in the Hays County Jail was more than three months. Though some inmates have been held as long as seven years awaiting trial. Gray’s co-defendant, Devonte Amerson, has been held for four years.

"People of color and people that do not have the financial capability to adequately defend themselves are handled very harshly. It's terrible because those are the people that need the most help with this situation," said Gray.

Under Texas law, a person who is detained in jail pending trial must be released on personal bond or their bail must be reduced after a certain number of days. The number of days is contingent on the charge. For example, it is 90 days for a felony.

There is nothing in that law that states a person must be able to make bail. However, some attorneys, like Travis County District Attorney José Garza, believe reasonable bail is constitutionally protected. The eighth amendment protects against excessive bail.

Gray said it has been difficult adjusting to life outside of jail.

In February, Gray is set to go to trial for a second time with a new public defender.

"I have no hope in the criminal justice system. Just from my personal experience and from what I've seen other people go through. I am hopeful in change. But as far as the system itself, there's going to be a lot of work that has to put in place for it to function the way that it was intended to function for citizens," he said.