2 dead after helicopter crashes, bursts into flames in Rowlett

The pilot of a helicopter and a passenger did not survive a fiery crash in Rowlett Friday morning.

ROWLETT, Texas - The pilot of a helicopter and a passenger did not survive a fiery crash in Rowlett Friday morning.

The crash happened just before noon, in a field surrounded by a number of businesses in the 2200 block of Lakeview Parkway, which is about two miles west of the President George Bush Turnpike.

The aircraft burst into flames after impact. Dozens of people working nearby rushed to try and save the two people inside, but the flames were too much.

Firefighter were later able to quickly put the fire out.

Rowlett police confirmed the pilot and one other person died in the crash. The victims' names have not yet been released.

The crash site is being preserved until National Transportation Safety Board and FAA investigators arrive Saturday morning.

Video shared by a FOX4 viewer shows a portion of the helicopter separated from the body of the aircraft as it was spiraling to the ground.

The tail rotor separated from the body of the aircraft midair and it landed on a storage building.

Witnesses watched what happened rushed to help, but there wasn't much that could be done.

"I heard an explosion, and a few seconds later, I saw the helicopter hit the ground. I jumped out, it was already in a ball of fire, I jumped out and tried to get him out, but it was too late," Philip Herndon said. "You don’t have a thought, you just try to go help."

"You could see people getting close, you could see them back away shielding themselves, because it was just so hot. It was nothing they could do to save them, unfortunately," John Rangle recalled. "All these areas where he could have hit, it definitely could have caused more casualties." 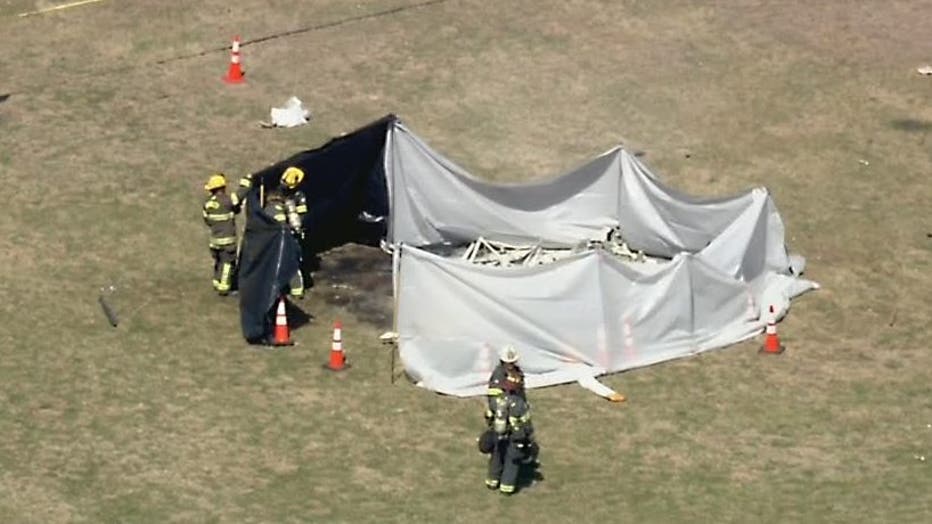 Rowlett detective Cruz Hernandez was nearby when the crash happened and was the first law enforcement on the scene.

Hernandez was moved by the amount of people rushing to try and help.

"For me, it was hope, that people would help during a tragedy," he said. "You got a helicopter down, it burst into flames, you don’t know if it would burst again."

The tail number of the helicopter showed it was owned by Sky Helicopters, a company in Garland that also provides air resources to FOX 4 News.

Just last month, an R-44 helicopter crashed into the water off Miami Beach. The pilot reported a violent shaking in the aircraft before losing control. One person died.

And in January, Robinson sent out a service bulletin to R-44 owners, calling on them to replace specific tail rotor blades, issued as spares, because some may crack.

According to the FAA, failures from tail rotor blade cracks can lead to loss of control.

It’s unclear if this helicopter had those affected blades. It’s likely something investigators will try to determine.