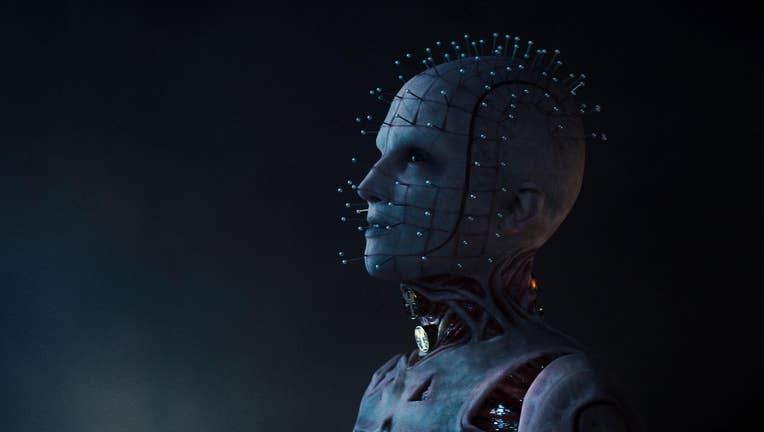 LOS ANGELES - Welcome to Screamworthy! As spooky season reaches its zenith, your trusty FOX Digital film critics will be taking a look at some of the weirdest, wildest and most-talked about horror movies of this year and years past. First up: Longtime "Hellraiser" devotee Aaron Pruner digs into one 2022’s most high-profile horror flicks — David Bruckner’s"Hellraiser" remake, which is now streaming on Hulu. This post includes minor plot details.

When Clive Barker’s "Hellraiser" first premiered in 1987, my 11-year-old eyes weren’t permitted to see it on the big screen. Rest assured, though, I did see it, as well as 1988’s follow-up flick "Hellbound: Hellraiser II." That’s true of a whole generation of horror fans, whose early love for the spooky and scary was forever altered by Barker’s game-changing classic. Now, 35 years and a cavalcade of lackluster direct-to-video sequels later (Doug Bradley’s Pinhead and the rest of the Cenobite gang deserved better), a new studio-backed "Hellraiser" has finally arrived.

Director David Bruckner has taken on the hellish (hell-ish) task of reintroducing Barker’s tortured, beautiful world to the masses. Neither a sequel nor a reboot, per se, Hulu’s "Hellraiser" is a spiritual successor to what came before.

So what’s new? A few things, actually. Instead of treading the same carnage-covered ground, Bruckner brings some intriguing new story elements to the mix. Stylistically, he pivots slightly away from overt, gratuitous gore — but never fear, there’s still plenty of nightmare fuel left in the box. There are new characters, new skinsuits and an excellent new successor to Bradley’s iconic performance.

But perhaps most significantly, Bruckner also expands upon the lore of the iconic puzzle box, further building out the rules and machinations of the elusive underworld from whence the Hell Priest and her minions come. So let’s dig into all of that. Here are the highs, lows, ins, pins and outs of the new "Hellraiser."

The characters: A new "Hellraiser" heroine 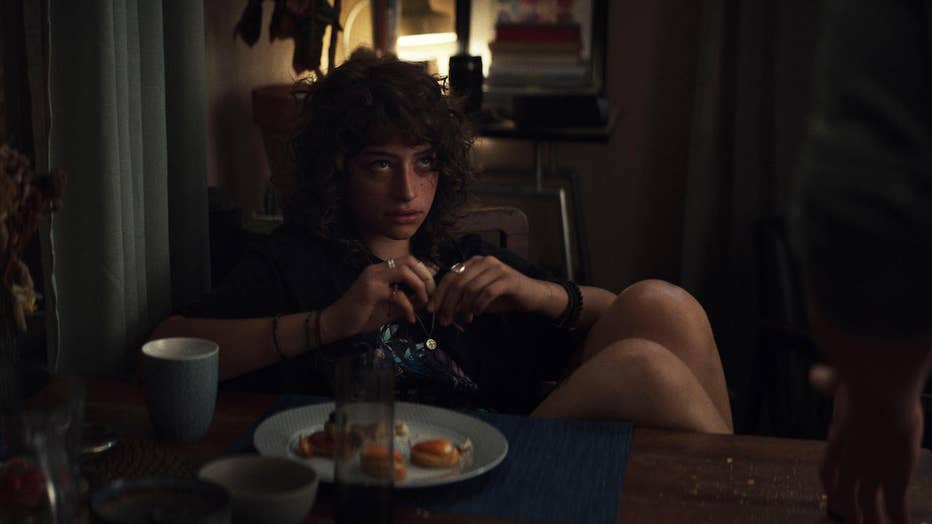 The story here follows Riley (Odessa A’Zion), a young woman living with addiction who’s struggling to connect not only with her brother, but with the world around her. Then a brooding bad boy beau named Trevor (Drew Starkey) clues her in on an odd smash-and-grab job — one that puts Riley face-to-face with the mysterious puzzle box (a.k.a. the Lament Configuration, a.k.a. the LeMarchand Configuration). She tumbles off the wagon and out into the streets, and the nightmarish chaos begins.

During a drug-induced hallucination, a stuporous Riley unwittingly solves the first step of the box. To paraphrase Pinhead’s famous line to Kirsty Cotton (Ashley Laurence) in the original film: The box. She opened it. They came.

This initial, horrific meet-cute has bloody consequences, the first of many for people Riley holds dear. It’s a pivotal moment that sets the stage for a life-and-death investigative journey into the mythos of the box. Yet though the stakes of the whole she-bang are staggeringly high, our heroine doesn’t always make the smartest choices. As she continues to haphazardly carry the box around in her purse, it’s hard not to wish that hooks would fly from mid-air to yank her away into oblivion.

That’s the first big issue of the 2022 "Hellraiser": It offers a compelling and beautifully designed world, but when it comes to humans who inhabit this film, the character development barely punctures the skin. Throughout the film’s two-hour running time, an obvious addiction/recovery allegory plays out — yet who Riley is never becomes clear. Neither she nor her choices are likely to engage the audience’s empathy muscles for long.

WATCH FREE ON TUBI: Odessa A’zion in the horror flick "Let's Scare Julie" — get the app

That’s not to say that A’zion doesn’t bring any emotional depth to the role. She, like the rest of the cast, does the best she can with the material. But what’s true of Riley is also true of her brother Matt (Brandon Flynn), his boyfriend Colin (Adam Faison) and their roommate Nora (Aoife Hinds): It’s tough to really call these characters anything but one-note.

Still, while the character development falls short, the production design, makeup effects and one especially brilliant casting decision make this new "Hellraiser" worth puzzling out. 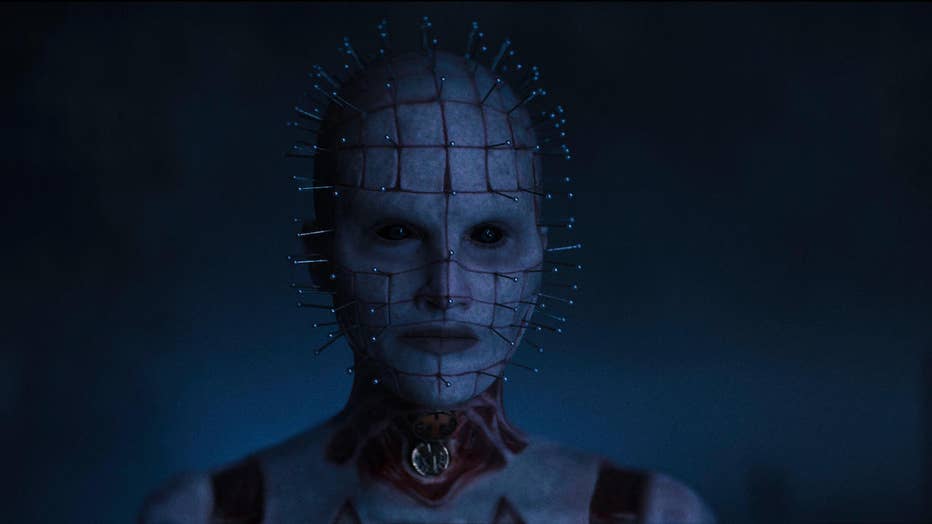 As the Hell Priest, "Sense8" alum Jamie Clayton makes Pinhead completely her own, with a calculated saunter, a gravel-tinged vocal delivery and a commanding yet contemplative presence. If anything, it’s her performance as the Cenobite leader of the "Order of the Gash" (the official term for this hellbound gang) that allows this "Hellraiser" to elbow the lesser "Hellraiser" films of yesteryear to the side, creating a Pinhead that’s every bit as memorable as Bradley’s iconic (if often ill-served) original.

WATCH FREE ON TUBI: Jamie Clayton in "Chain of Death" — get the app

Plotwise, Riley’s journey to figure out what this box is (and where the heck her friends keep disappearing to) eventually brings her to the cage-like mansion of billionaire madman Roland Voight (Goran Visnjic) who, as we see in the movie’s opening moments, is sacrificing young pretty people to the Cenobites in order to level up to Leviathan status.

This brings me to the most important, game-changing plot detail (one that offers a plethora of exciting possibilities for any potential sequel). At long last, after years of letting audiences fill in the blanks, Bruckner’s "Hellraiser" clearly lays out the rules and mechanics of LeMarchand’s Configuration, offering a detailed explainer on the lore of the Lament Configuration. 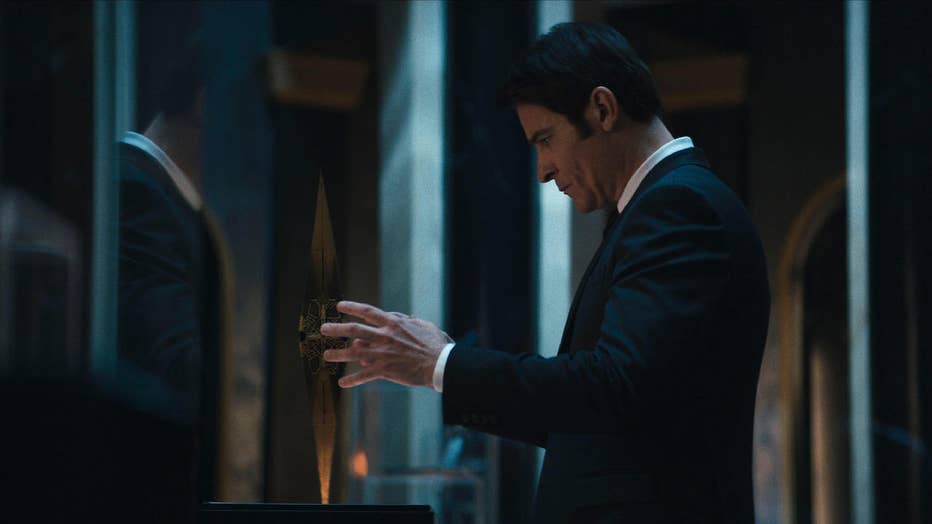 In an effort not to get too lost in the minutiae of it all, I’ll keep this short: It’s revealed through camera shots of Voight’s journal entries that the box has seven puzzle configurations, each one granting access to a new spiritual level of hell. Think of it like a sinister Alternate Reality Game, in which actual blood-hungry demons come to your real life mansion to collect a bounty every time you unlock a new achievement.

WATCH FREE ON TUBI: Goran Visnjic in the haunted horror movie "The Accursed" — get the app

After each new level is completed, the box takes on a new form. And if all seven configurations are solved successfully, the giant floating diamond known as Leviathan — which first appeared in "Hellbound: Hellraiser II" — appears, offering the user a conversation with god.

The religious elements at play here harken back to Barker’s original novella, further separating this "Hellraiser" flick from many of its predecessors. And instead of the sweaty, leather-slapping sadomasochism that’s so often driven the franchise, it’s obsession and zealotry that fuel Roland’s deadly mission.

And on the other hand, there’s Riley, seeking salvation.

It’s likely that both longtime fans and new "Hellraiser" disciples will have some quibbles with Bruckner’s film. But it’s just as likely that any small gripes will be outweighed by the fact that, impossibly, we have a beautiful new "Hellraiser" movie to marvel over. And boy is it a sight to behold. 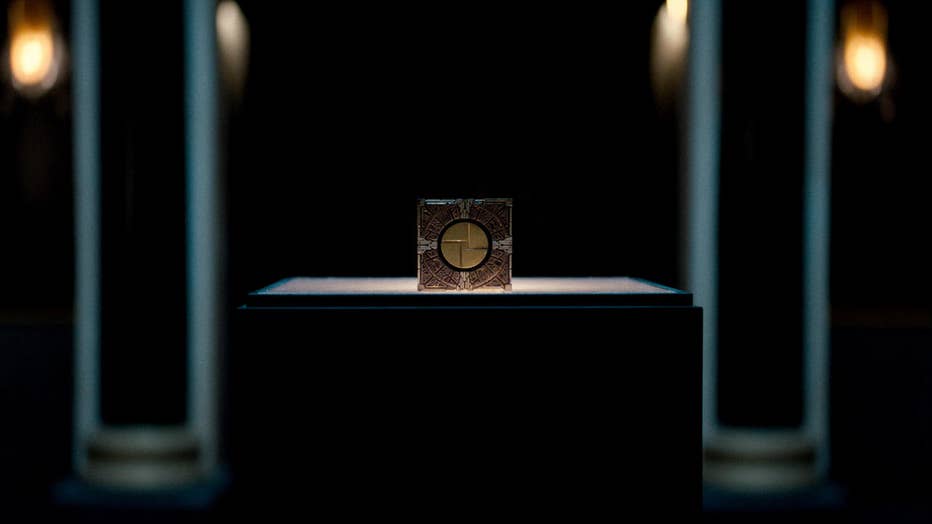 Bruckner doesn’t skimp on intriguing visuals in this film. And that effort pays off — though perhaps it’s better to say that the director’s commitment isn’t to rich imagery, but to plumbing an already rich world for new treasures.

What’s fresh about this take on "Hellraiser" is neither divorced from nor derivative of the franchise from which it springs. Viewers shouldn’t anticipate an easter egg hunt: Aside from a few nods to the original, among them Clayton’s delivery of an iconic Doug Bradley line and composer Ben Lovett’s inclusion of motifs from Christopher Young’s 1987 score, Bruckner keeps this ride to hell fixed to its own unique path.

Bruckner conjures doorways from nothingness, makes walls shape-shift into ominous hell caverns and elevates netherworld stairs from ordinary pavement. The iconic Cenobites get themselves some new and grotesque torn-apart-then-stitched-back-together skin suits. And the film’s overall approach is a departure as well, as Bruckner tones down the franchise’s customary gore-fest in favor of exploring the kinds of psychological issues that would drive a person into this world in the first place. 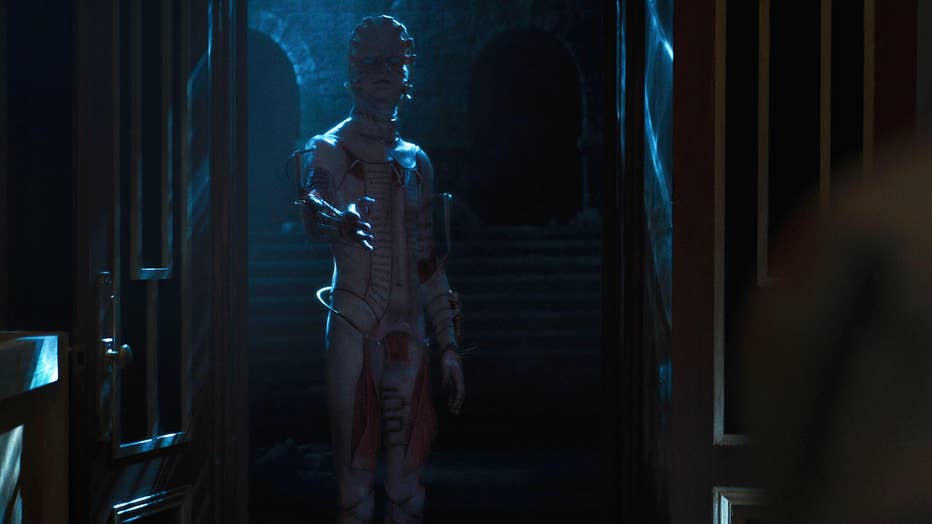 Don’t get me wrong here: This is still a "Hellraiser" movie, so you can expect some flayed flesh and the odd roughly dismantled corpse. But as Tobe Hooper did with 1974’s groundbreaking slasher "The Texas Chain Saw Massacre,"Bruckner opts to play with the viewer’s imagination. This creative choice might’ve reaped even bigger stylistic dividends on the big screen. Alas, no theatrical run was granted Pinhead’s newest outing, confining the hell world originally created by Clive Barker to the Disney-owned streaming service Hulu.

WATCH FREE ON TUBI: "The Texas Chain Saw Massacre" — get the app

Seriously, though, who would’ve thought we’d ever get another major "Hellraiser" movie to begin with? Heck, it’s 2022 and there’s something about a Mouse House-backed "Hellraiser" that feels fitting to where we are as a society. Let’s just keep the Mickey ears off of Chatterer, okay?

Our critic’s take: A box worth opening

Whether this outing with the Cenobites will lead to future installments is anyone’s guess, but it’s certainly laid the groundwork for future stories. More importantly (and surprisingly), it makes the case that such endeavors would be worthwhile.

Nitpicks aside, Bruckner, Clayton and co. have successfully raised the bar for the series, lifting the sunken ship that is the "Hellraiser" franchise from the depths of ruin to a place of potential, ushering a tired old story onto fresh new ground and making future installments a real (and welcome) possibility. The sights on display are horrific. The new Pinhead is glorious. And this lifelong "Hellraiser" fan is absolutely ready for more.

About the writer: Aaron Pruner is an actor and writer in L.A. His work can be found at Rotten Tomatoes, The Washington Post, Inverse and more. Fun fact: He once played Charlize Theron's nerdy boyfriend in a Japanese Honda commercial.

Make it a double feature with "The Descent," streaming free on Tubi

The Descent (2006): Directed by Neil Marshall ("Game of Thrones," "Hellboy"), "The Descent" is often lauded as one of the best horror films of the last 20 years. It deserves that reputation. Certainly, it is a masterclass in escalating tension that dishes out dread long before the magnitude of the desperate scenario is fully realized. So, what is the premise? Six women who love nothing more than adrenaline-pumping outdoor activities head into the Appalachian Mountains for a thrill-seeking spelunking adventure. Soon, old wounds are reopened along the very dark way of the cave system and it isn’t long before matters take a deadly turn. Read the rest of Emma Fraser’s thoughts on this contemporary classic. Rated R. 98 minutes. Dir: Neil Marshall. Featuring: Shauna Macdonald, Natalie Mendoza, Alex Reid, Saskia Mulder, MyAnna Buring, Nora-Jane Noone, Oliver Milburn.

"The Descent" is streaming free on Tubi — get the app

How to watch "Hellraiser"

"Hellraiser" is currently streaming on Hulu. Pans begin at $7.99/month for the ad-supported tier ($1.99 for eligible students!); options include ad-free and Live TV tiers, as well a bundle with Disney+ and ESPN+.