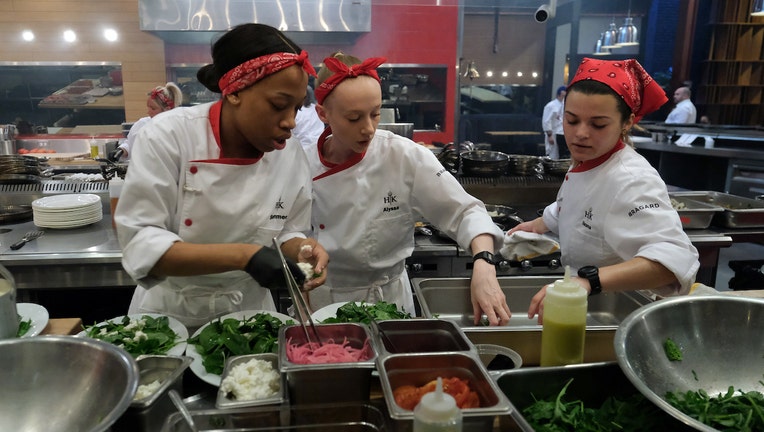 CHICAGO - Welcome back to "Hell’s Kitchen" recaps! This week, the red team gets some red-emption while one of the blue team’s chefs attempts to show off his muscles. Miss a week? You can read our recaps, starting with our recap of the premiere, and watch On Demand, on FOXNow, on Hulu and on Tubi, FOX’s free streaming service. This television station is owned by the FOX Corporation.

The red team needs a win. This week’s episode begins with Mindy, one of the season’s fortysomethings, crying in the dorm following Nicole’s elimination. "It’s hard to stay positive when you keep losing," she says.

Billy, on the other hand, isn’t having any trouble staying positive, despite him coming to the realization that he’s not particularly beloved among the contestants. "I’m not here to make friends," he declares, before marking reality TV’s best-known adage off on his bingo card. He and Abe, elders on the blue team, acknowledge that they’re "tasmanian devils" on a team of cooler-headed cooks. Both feel their ability to run a line and "pump up" the kitchen will benefit them in the long run. 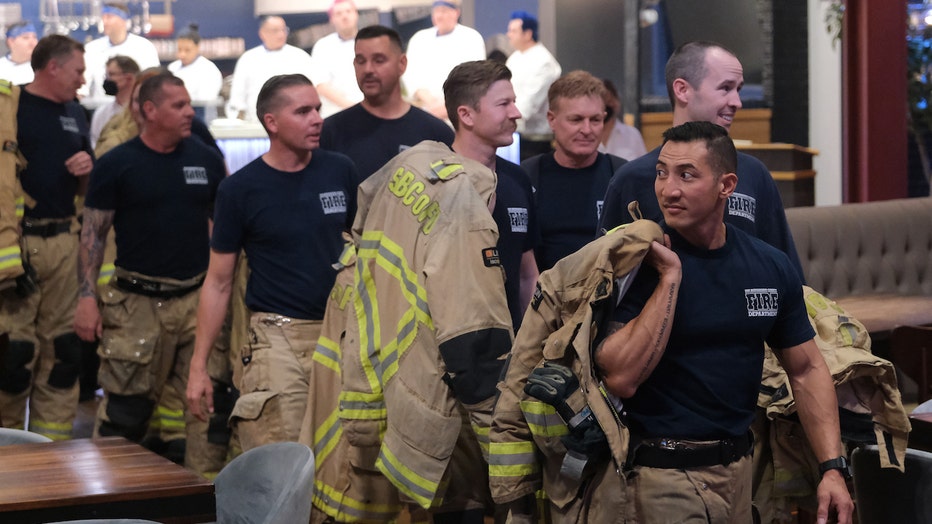 WATCH FREE ON TUBI: "Anthony Bourdain: A Cook’s Tour" — get the app

A fire alarm rouses the chefs the following morning, interrupting a hilarious moment in which a sleeveless, flexing Billy tells Mindy to look at his muscles and she replies with an unimpressed "I see." Bleary-eyed and clad primarily in pajamas, the contestants find dozens of firefighters in the Hell’s Kitchen parking lot. Gordon Ramsay ’s also present, ready to celebrate the bravery of the assembled masses as confused cooks clap halfheartedly in their underwear.

According to Ramsay, the first responders just finished their overnight shifts and are hungry. For their daily challenge, the red and blue teams must prepare a multi-course breakfast for their guests consisting of a pear salad, an orange passionfruit cooler, firehouse potatoes and a choice of entrée: steak and eggs, pancakes or a breakfast sandwich. The thrust of the challenge is speed — whoever serves their section first wins.

WATCH FREE ON TUBI: Gordon Ramsay's "24 Hours to Hell and Back" — get the app

Alyssa and Sommer, as usual, butt heads on the red team, while Dafne and Tara can’t agree on how to stack their sandwiches. It seems like a minor squabble, the sandwich stacking, but Tara’s right in that a sandwich’s construction can make or break it. This is an instance where the elders have something to teach the young bucks. Thankfully, these dustups don’t impact their service. The blue team, on the other hand, isn’t so lucky. Alejandro consistently fails to serve up medium-rare cuts of steak, essentially dealing a deathblow to his entire team. 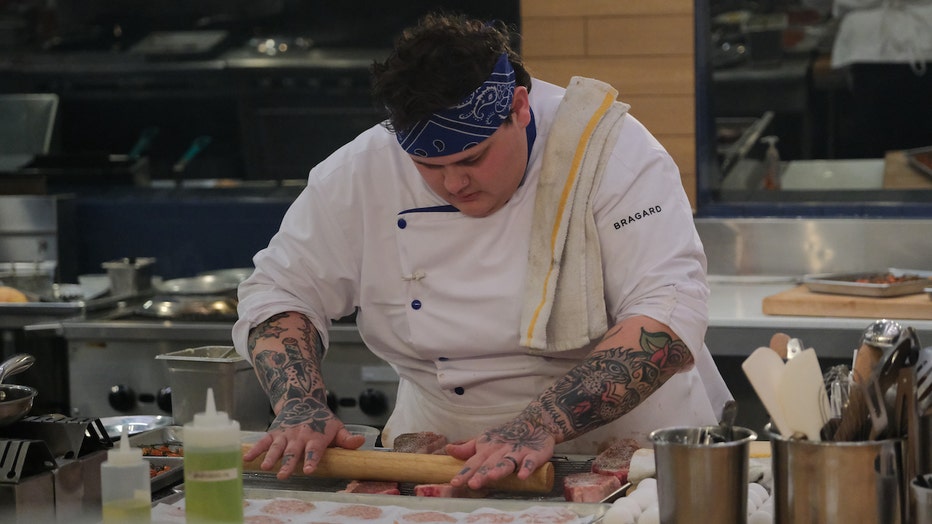 The women win, allowing Tara and Mindy to escape punishment for the very first time. Their prize is an overnight party in a mansion overlooking the Hollywood Hills with a taco dinner provided by Roy Choi’s famous Korean-Mexican food truck Kogi. The blue team’s punishment is to take out the "rancid" trash. "You are going to stink," says Ramsay. Alejandro and Alex both refuse to use their punishment passes, with Alejandro noting that when "you fail as a team, you go down as a team." Part of me wants to shake them, but they’re not wrong in thinking that it’s best to not cultivate resentment when this portion of the competition is so team-driven.

That said, it’s hard to think of a harsher "Hell’s Kitchen" punishment than sorting through wet gobs of rotting fish guts in the Los Angeles heat while encased in hairnets, goggles and biohazard suits. Billy continues to annoy everyone. ‘Twas ever thus.

Meanwhile, the sprawling Hollywood Hills can’t fix the fissure that continues to grow between Alyssa and the rest of her team. She feels like an "outcast" and that simmering resentment is harshing everyone else’s vibe.

Alyssa’s unease carries over into dinner service, though you wouldn’t be able to tell. Aside from a few hiccups, the red team pulls off a near-flawless dinner service. The boys, on the other hand, hit hurdle after hurdle.

First, Abe can’t get his carbonara right on the app station, despite it being "the easiest thing on the menu," per Vlad. But Vlad’s got problems of his own. On the meat station, he and Billy butt heads. And while Vlad is clearly the better cook of the two, he throws Billy under the bus on multiple occasions, first by calling out the wrong orders and not acknowledging as much when Billy gets yelled at, then by allowing Billy’s lamb to overcook when Billy is called away to make desserts. Regardless, Vlad still wants Billy to go home. "He’s a ticking time bomb that I have to control," he says. 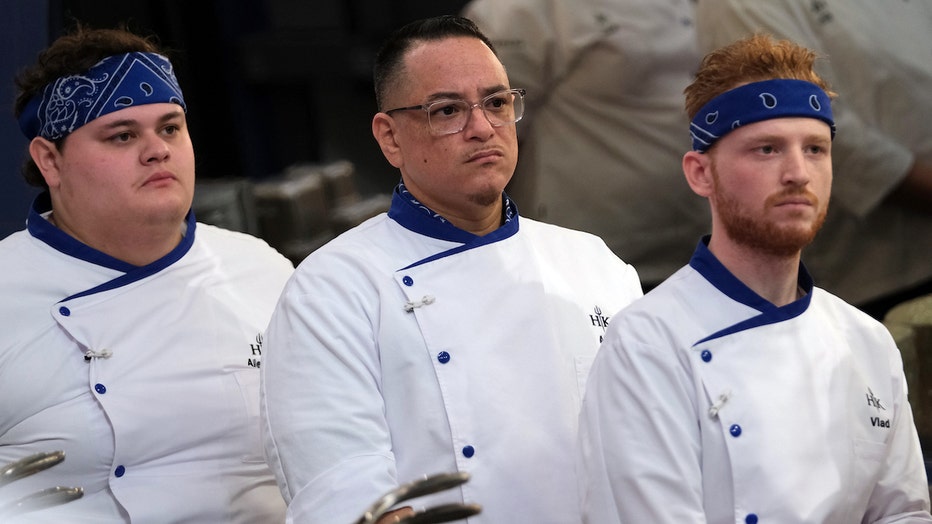 The red team wins and, according to Alyssa, "it’s about damn time." This means the blue team has to nominate three cooks to be up for elimination. Given the struggles on the meat station, everyone agrees Vlad and Billy should be nominated. Vlad doesn’t argue with the decision, but he does say he would’ve been "more comfortable" without Billy on the station. Billy retorts by urging him to own up to his mistakes, and he’s not wrong.

As for the third nominee, it’s between Abe and Alejandro. Alejandro makes sense. He cost the team the daily challenge. The blue team’s reason for considering Abe is his hot-headed behavior in the kitchen, which, while intense, isn’t nearly as disruptive as Billy’s. In the end, they put up Alejandro.

WATCH FREE ON TUBI: "Michelin Stars: Tales From the Kitchen" — get the app

When Ramsay asks why the chefs should stay in the competition, Billy and Vlad take different approaches. Billy emphasizes the "passion and love" he brings to the competition and promises he’ll "bounce back." Vlad, meanwhile, doesn’t acknowledge his failures, instead reminding Ramsay that he’s been actively stepping into a leadership position and that he’s routinely cooked "beautiful proteins." Alejandro knows he "dropped the ball big time" and Ramsay agrees, calling his performance during the challenge a "big letdown," a dig that doubles as a backhanded compliment. Ramsay can’t be disappointed in you if he doesn’t think you’ve got actual potential.

Nobody ends up going home, with Ramsay saying their dinner service was, despite its flaws, strong enough to give them a pass. If we’re being honest, though, it’s likely that the producers know Vlad and Alejandro are genuine contenders and Billy is too entertaining to go home this soon.

About the writer: Randall Colburn is a writer, editor, and podcaster based in Chicago.

"Great British Bake-Off" icon Mary Berry cooks up comfort food in her cozy kitchen, casually coaxing curious cooks into concocting Berry’s favorite recipes. (No, we will not apologize for any of that alliteration.) One season, eight episodes.

How to watch "Hell’s Kitchen"

"Hell’s Kitchen" airs Thursdays at 8 p.m. EST on FOX. You can also watch On Demand or stream online via FOXNow. 13 seasons, including much of the current season, are streaming on Hulu. And Tubi’s Gordon Ramsay channel offers many of Ramsay’s seemingly infinite shows, including "MasterChef," "MasterChef Junior" and "Next Level Chef," his latest.