Researchers and U.S. election officials say that voting by mail does not lead to massive voter fraud.

WASHINGTON (AP) - Hundreds of lawsuits about voting have been filed ahead of the November election. The cases concern the fundamentals of the American balloting process, including how ballots are cast and counted. Here's a look at some of the top lawsuits in battleground states:

NORTH CAROLINA: The Trump campaign and the Republican National Committee are suing in federal court to block state election officials from enforcing rule changes that could boost the number of ballots counted. That includes guidance that will allow the fixing of absentee ballots with deficient information without forcing the voter to fill out a new blank ballot.

PENNSYLVANIA: Republican lawmakers have asked the U.S. Supreme Court to put a hold on a ruling that extends the deadline for counting and receiving mail-in ballots. The state Supreme Court said in a divided ruling that ballots must be postmarked by the time polls close and be received by county election boards by 5 p.m. on Nov. 6. A separate federal lawsuit by the Trump campaign and the RNC seeks to outlaw drop boxes or other collection sites that some counties used in the June primary. 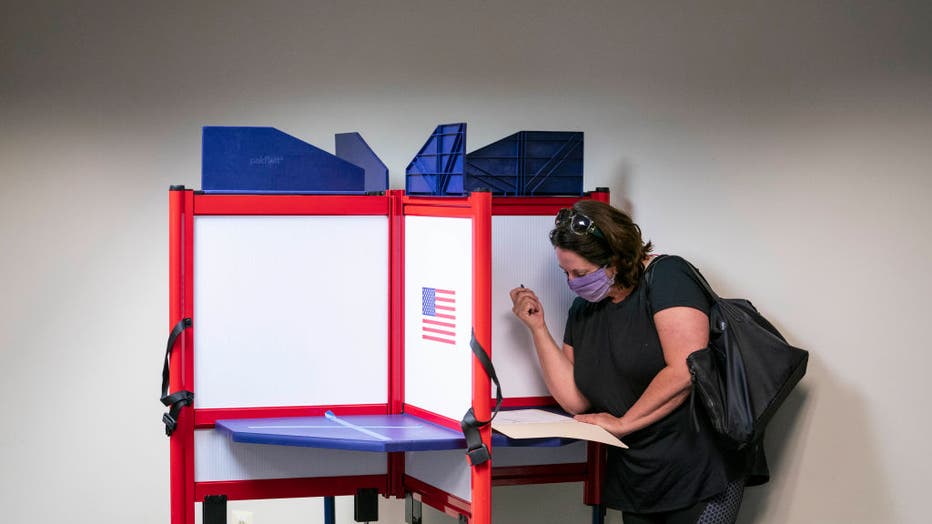 FILE - A woman casts her ballot for the 2020 presidential election at an early voting location on October 1, 2020 in Alexandria, Virginia. (Photo by Sarah Silbiger/Getty Images)

ARIZONA: A federal judge ruled in favor of Democrats by holding that voters who neglected to sign their early ballots before mailing them in get up to five days after the election to fix the problem. The judge ruled that it was not fair for elections officials not to give voters a chance to “cure” the problem. The case has since been appealed to the Ninth U.S. Circuit Court of Appeals.

WISCONSIN: A federal appeals court on Tuesday upheld a six-day extension for counting absentee ballots in Wisconsin as long as they are postmarked on or before Election Day. The ruling gave Democrats in the state at least a temporary victory in a case that could nonetheless by appealed to the U.S. Supreme Court. In neighboring Michigan, the GOP is suing to try to overturn a decision that lets the state count absentee ballots up to 14 days after the election.

OHIO: Democrats have sued the state’s election chief to force an expansion of ballot boxes in the state’s 88 counties. County election boards maintain single drop boxes at each board location as an alternative to mailing in an absentee ballot. Also in the state, a federal judge rejected changes to the signature-matching requirement for ballots and ballot applications.