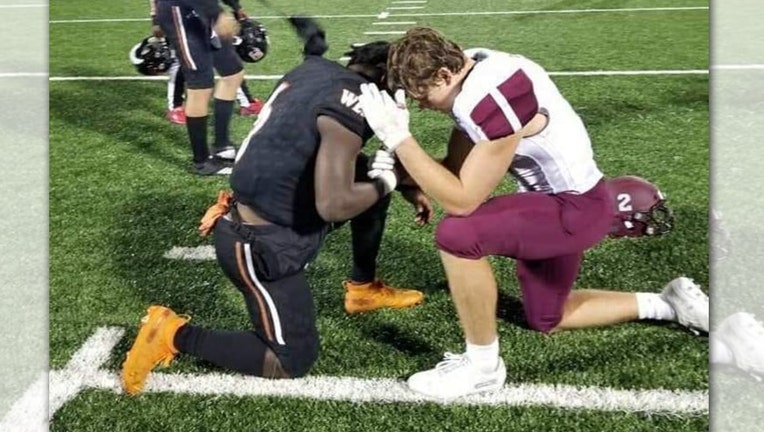 SHERMAN, Texas - An act of sportsmanship took place at a high school football game -- in the form of a prayer.

Gage Smith, a high school senior at Sherman High School in Texas, made some key plays in the football game against West Mesquite High Friday night, but it was what Smith did after the game that most people remember.

Smith told KVII he knows one West Mesquite player, Ty Jordan, from a selection 7-on-7 team they both played on. He also knows Jordan’s mom is battling cancer, and Smith asked to pray with him after the game.

"When you're playing the game, you're playing to win and the other team is the enemy, but afterwards you still have respect for the other opponent," Smith said. "I just had a moment with him praying over him, his mom, and his family."

Smith said in that moment, it wasn’t about the score or being opponents, it was about showing compassion. Jordan’s aunt posted images of the moment on Facebook, expressing how much the gesture meant to their family. Then, it went viral.

"To see that it blew up I was very surprised by it, and I wasn't expecting it to be like that you know, I was just doing it for him and doing it for his mom and his family," Smith said.

"He's a true leader, and he has compassion, and it followed through for a lot of the guys on the team," Martinez said. "Football brings people together in so many ways, and that was just one example of it that night."