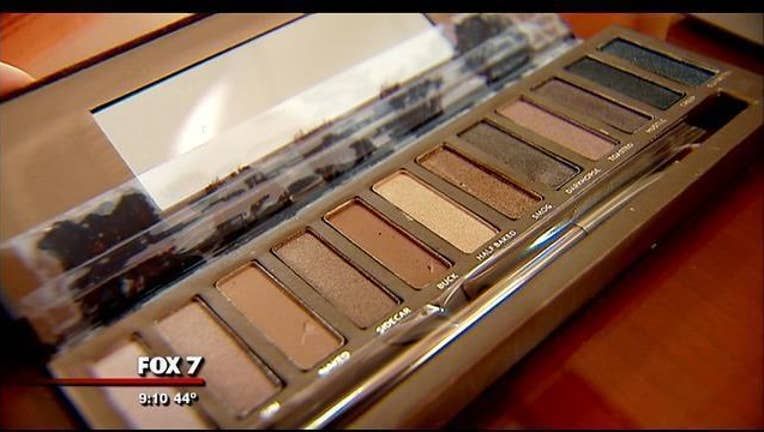 AUSTIN, Texas - Who doesn't like a bargain? But at what price are you willing to pay? Would you risk your health? Investigators with the U.S. Department of Homeland Security say counterfeit cosmetics are poisoning Americans and our economy.

There are bargain sites for everything on the internet these days… even makeup. On one site we found it lists name brands at deep discounts.

We saw an Urban Decay Brow Box for $14.99. That's half the cost of what is listed on the website for well-known make up store Sephora.

On Ebay there are pages of postings. MAC eye shadows, for instance, are being sold for $10, compared to the actual store price of $15.

The posts say 100% authentic, but there's something you should know before you click.

"You may be literally poisoning yourself over time," said Special Agent Joe Ortega, U.S. Dept. of Homeland Security.

"We've found things such as arsenic, lead and as you know that's not very good for you," said Ortega.

The poisons, Ortega says, are used as fillers for coloring.

"They'll use anything. Obviously they have no standard for making them. Most of the stuff we found comes from China," said Ortega.

On one website we found, a seller when questioned if a MAC product was authentic, responded with "replica."

Counterfeit products are not only found online. Agents have seized them at flea markets, mall kiosks and stores.

A New Jersey woman was recently prosecuted for counterfeit makeup sales when a customer of hers told Homeland Security she got a rash on her eyelid within minutes of using what she thought was MAC brand eyeliner.

"The skin on your face absorbs things differently than anywhere else on your body. Especially the skin around your eyes, it's the thinnest skin on our body," Diven said. "It could cause acne on your face, dermatitis or eczema or scaling. Theoretically you can absorb through your skin too. There could be bacteria because there is no quality control. Anything could be in there."

If you think that is bad, Ortega says fake fragrances have been found to contain human urine.

So how do you decipher between what's real and what's fake? Ortega showed us the difference. It's not something you can tell online.

"One you feel the bottle it's a lot lighter and thinner. This would never happen on a real Chanel where it's coming apart. The actual texture. The font on it will sometimes be different. A lot of times believe it or not there will be misspellings in the words," Ortega said.

So basically, you need to get your hands on the item.

One of the wallets Ortega showed us looked real, but once we opened it, a "made in China" label was inside.

Right now the hot items are jerseys. Homeland Security began shutting down websites selling fake NFL gear so that counterfeiters would not get the chance to profit off of the Super Bowl.

"In the last three to five years we've seized hundreds of those sites and for everyone we take down we are sure one or two more pop up," said Ortega.

While clothing, purses and wallets won't jeopardize your health like makeup will, Ortega says the purchase is harmful on a much larger scale.

"It really hurts our American industry in the U.S.," said Ortega.