The committee investigating the U.S. Capitol riot said it will refer to the U.S. House that Trump-ally Steve Bannon be held in contempt for defying a subpoena related to the investigation.

WASHINGTON - The Jan. 6 investigative panel of the U.S. House of Representatives voted to refer Trump ally Steve Bannon in criminal contempt of Congress for defying a subpoena regarding the investigation into the U.S. Capitol insurrection.

The unaminous Tuesday evening vote sends the contempt resolution to the full House, which is expected to vote on the measure Thursday. House approval would send the matter to the Justice Department, which would then decide whether to pursue criminal charges against Bannon. According to the Jan. 6 investigation panel, if Bannon is found guilty of the misdemeanor, he could face a $100,000 fine and up to a year in jail.

Before the vote, Rep. Bennie Thompson, D-Miss. issued a warning to those also considering to defy a subpoena. 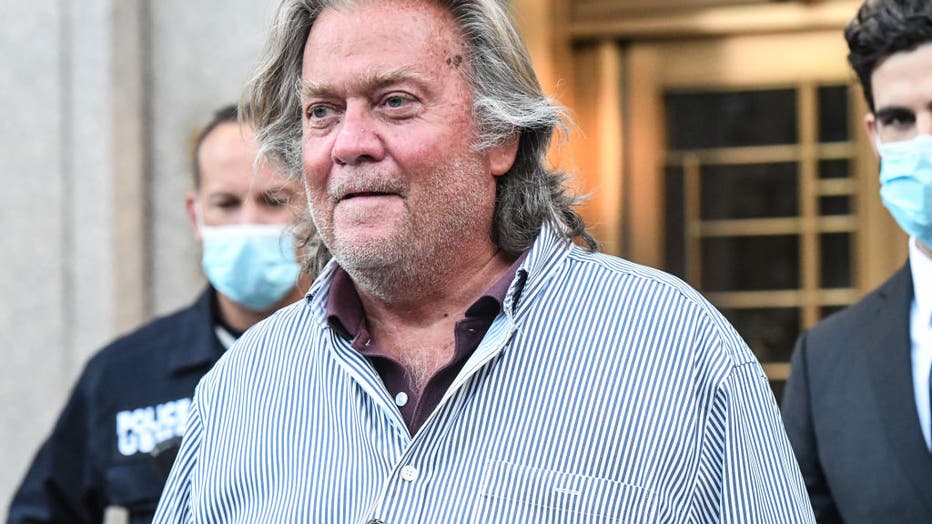 "If you’re thinking or following the path Mr. Bannon has gone down, you are on notice that this is what you’ll face," he said. "The process we’ve begun tonight is a grave one."

The panel first voted to recommend the charge to the House Monday, believing Bannon has key information and played a role in the organization of the Jan. 6 riot.

Many of the rioters, who stormed the Capitol on Jan. 6, marched up the National Mall after attending at least part of then-President Donald Trump’s rally, where he repeated his meritless claims of election fraud and implored the crowd to "fight like hell." Dozens of police officers were injured as the Trump supporters overwhelmed them and broke through windows and doors to interrupt the certification of Biden’s victory.

The rioters repeated Trump’s false claims of widespread fraud as they marched through the Capitol, even though the results of the election were confirmed by state officials, upheld by courts and even rejected by Trump’s own attorney general.

More than 600 people face charges in the Jan. 6 attack. In the days after the attack, scores of rioters flaunted their participation in social media posts that bragged about their ability to get inside the Capitol. But then many started realizing it could be used as evidence and began deleting it.

The investigation panel said it believes Bannon "had specific knowledge about the events planned for January 6th before they occurred." Selection committee members pointed to Bannon’s Jan. 5 podcast where he said, "All hell is going to break loose tomorrow."

"In short, Mr. Bannon appears to have played a multi-faceted role in the events of January 6th, and the American people are entitled to hear his first-hand testimony regarding his actions," the report further stated. "Mr. Bannon’s testimony and document production are critical to the Select Committee’s investigation."

However, Bannon has become an obstacle to the investigation.

The showdown with Bannon is just one facet of a broad and escalating congressional inquiry, with 19 subpoenas issued so far and thousands of pages of documents flowing to the committee and its staff. Challenging Bannon’s defiance is a crucial step for the panel, whose members are vowing to restore the force of congressional subpoenas after they were routinely flouted during Trump’s time in office.

Last week, the committee had scheduled a deposition with Bannon, but his lawyer said Trump had directed him not to produce any information protected by executive privileges afforded to a president, and Bannon wouldn’t comply "until these issues are resolved." Bannon, who was not a White House staffer on Jan. 6, also failed to provide documents to the panel by a deadline earlier in the month.

The White House said Monday that there is no basis for Bannon to avoid testifying and that Trump’s privilege claim is "not justified."

White House Press Secretary Jen Psaki said Oct. 8, 2021, that President Joe Biden determined an assertion of executive privilege "is not warranted" for the first set of documents from the Trump White House.

Still, the committee could end up stymied again after years of Trump administration officials refusing to cooperate with Congress. The longtime Trump adviser similarly defied a subpoena during a GOP-led investigation into Trump’s Russia ties in 2018, but the House did not hold him into contempt.

While Bannon has outright defied the Jan. 6 committee, other Trump aides who have been subpoenaed appear to be negotiating. And other witnesses are cooperating, including some who organized or staffed the Trump rally on the Ellipse behind the White House that preceded the riot.

The panel has also issued a subpoena to a former Justice Department lawyer, Jeffrey Clark, who positioned himself as Trump’s ally and aided the Republican president’s efforts to challenge the results of the 2020 election.

A Senate committee report issued last week showed that Clark championed Trump’s efforts to undo the election results and clashed as a result with department superiors who resisted the pressure, culminating in a dramatic White House meeting at which Trump ruminated about elevating Clark to attorney general.