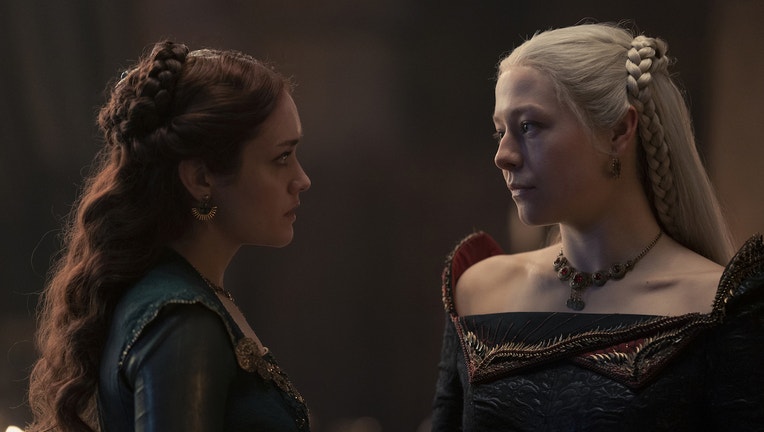 CHICAGO - Holy time jump, Batman! The sixth episode of "House of the Dragon" takes a series that was already moving at lightning speed and ratchets things up to 11. Well, 10, to be more precise, as the show jumps a full decade into the future and switches out half its main cast in the process.

It’s a massive, almost unprecedented move for a TV show to make halfway through its first season. And while some fans and critics were left scratching their heads at the choice, there are upsides to the show’s unusual structure. For one thing, the time jumps encourage viewers to engage with the characters on a deeper level, sussing out where they’re at emotionally in the same way you might try to figure out who did it in a murder mystery. And for another, the jumps allow "House of the Dragon" to cleverly echo the way real-life history is so often recounted as a series of big events — an enjoyably meta touch for a "Game of Thrones" prequel series.

Rhaenyra and Alicent are all grown up 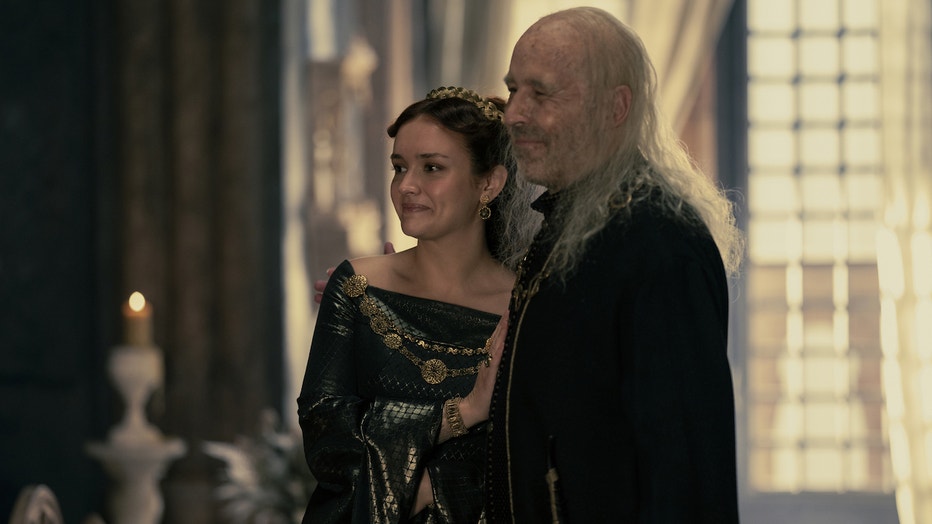 Last we checked in on our leading ladies, Queen Alicent (Emily Carey) was a young mom of two declaring her power with the help of a killer green dress, and Princess Rhaenyra (Milly Alcock) was a blushing bride who saw her ornate wedding feast turn into a bloodied, rushed marriage ceremony. Now the royal women are played by Olivia Cooke and Emma D'Arcy, respectively, and their relationship is a case of "the more things change, the more they stay the same."

In some ways, the episode’s titular princess and queen are right where we left them — at odds with each other over the future of the realm and the favor of an increasingly frail King Viserys (Paddy Considine). But it’s also noticeable that Alicent and Rhaenyra have seemingly swapped demeanors. Alicent is now the more bullish, self-righteous of the two, practically dripping with disdain over her former friend’s unconventional sex life and bold-faced lies. Rhaenyra, meanwhile, seems less sure of her place in court and her position as heir, and has adopted a slightly more conciliatory approach. (Not that Alicent seems interested in being conciliated.)

Ultimately, however, both women are motivated by the same thing: the bone-deep fear that when Viserys dies, the inevitable struggle for succession will put targets on their children's backs. 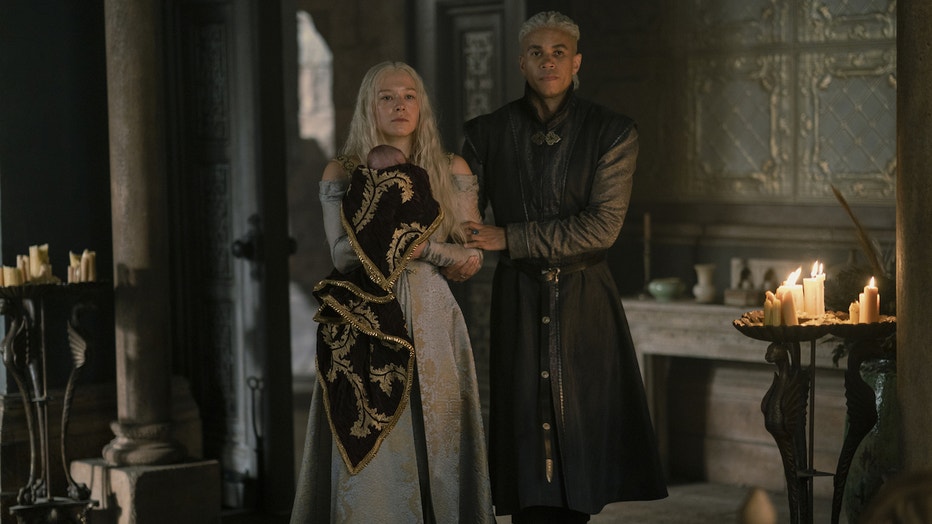 There are so many kids now!

One of the biggest things to wrap your mind around in "The Princess and the Queen" is the sheer number of new characters we meet, as Alicent and Rhaenyra’s kids enter the story in full force. As readers of George R.R. Martin’s "Fire & Blood" will know, this is very much a multi-generational story, and this episode throws viewers into the deep end when it comes to the new generation of Targaryens.

Let’s start with Rhaenyra’s side of things, as she opens this episode with a tremendous birth scene where she delivers a healthy baby boy. Her husband Laenor Velaryon (now played by John Macmillan) names the child Joffrey, after his lover who was killed at the wedding feast in the previous episode. "The Princess and the Queen" then casually reveals that Rhaenyra already has two other children as well: Lucerys a.k.a. Luke (Harvey Sadler) and her oldest Jacaerys a.k.a. Jace (Leo Hart), who follows her in line for the Iron Throne. 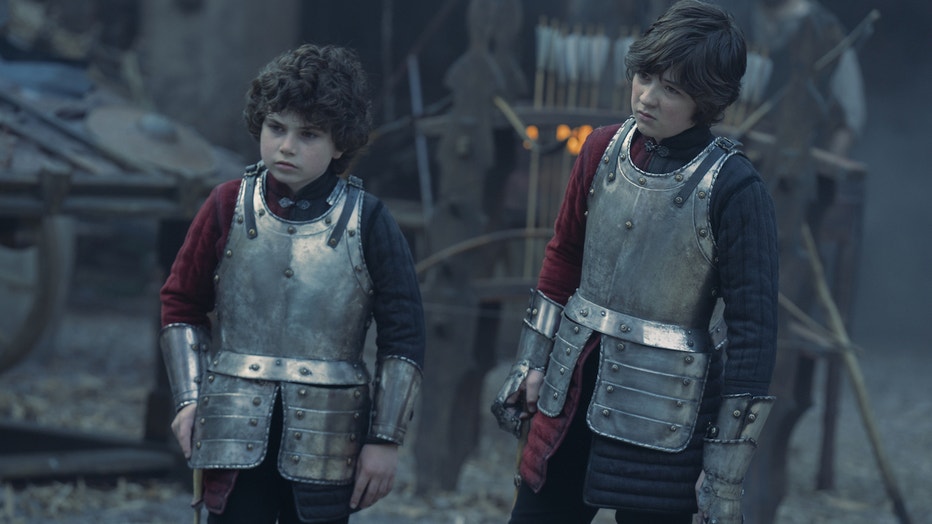 As basically everyone but Viserys can see, however, Rhaenyra’s sons don’t bear much resemblance to their ostensible father Laenor. In fact, it’s an open secret that Rhaenyra actually had her children with Ser Harwin Strong (Ryan Corr), commander of the City Watch. (More on him later.) And while that still makes them Targaryens through her bloodline, it could spell trouble for the future. As a woman, Rhaenyra’s claim to the Iron Throne is already tenuous. The idea that her royal heirs might be "bastards" certainly isn’t going to help shore up her case.

WATCH FREE ON TUBI: Christian Bale in "Royal Deceit" — get the app

Which brings us to Alicent and Viserys’ kids (a.k.a. Rhaenyra’s half siblings). No longer toddlers, entitled Aegon (Ty Tennant) and dreamy Helaena (Evie Allen) have been joined by younger brother Aemond (Leo Ashton), who’s got a chip on his shoulder because he’s the only one of the royal kids without a dragon. Still, dragon or no, the white-blonde hair he shares with his siblings makes it impossible to miss that they’re all proud Targaryens. 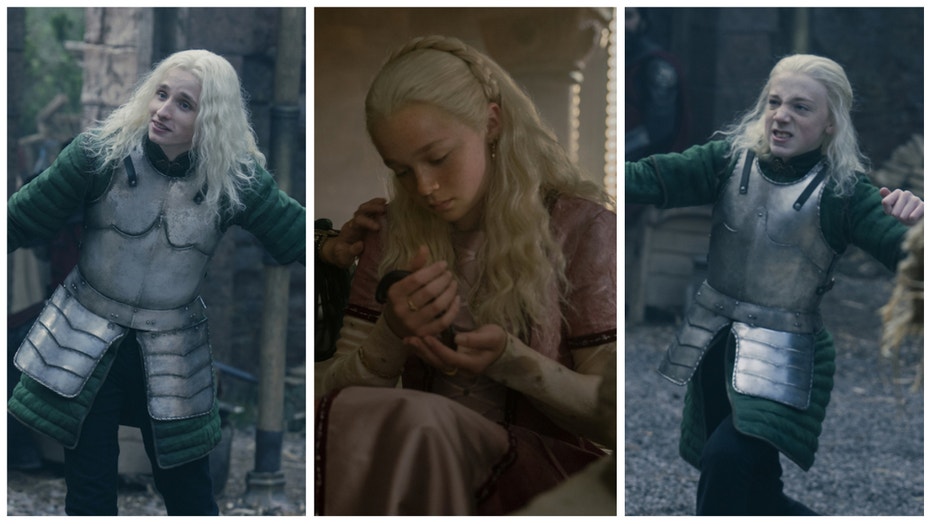 And that obvious royal lineage could wind up having a major impact on Westeros. As "House of the Dragon" has been drilling home since its third episode, Rhaenyra’s biggest rival for the throne is Aegon, who would traditionally get preference as Viserys’ first born son — and who many in the realm will likely support after Viserys dies.

WATCH FREE ON TUBI: "British Royal Scandals and Conspiracies" — get the app

But if Rhaenyra’s kids have a problem with legitimacy, Alicent’s kids have a problem with temperament. Aegon, in particular, seems to toe the line between cocky teen and cruel bully, especially with a bitter Ser Criston Cole (Fabien Frankel) stirring up animosity by favoring Alicent’s boys over Rhaenyra’s in the training yard. Though Viserys may want his sons and grandsons to grow up as loving brothers-in-arms, right now that’s wishful thinking at best.

But those aren’t the only new Targaryens in town. "The Princess and the Queen" also reveals that during the past decade, Daemon (Matt Smith) married Laenor’s sister Laena (Nanna Blondell), had two daughters named Baela (Shani Smethurst) and Rhaena (Eva Ossei-Gerning) and moved to Pentos to swap politicking for feasting. 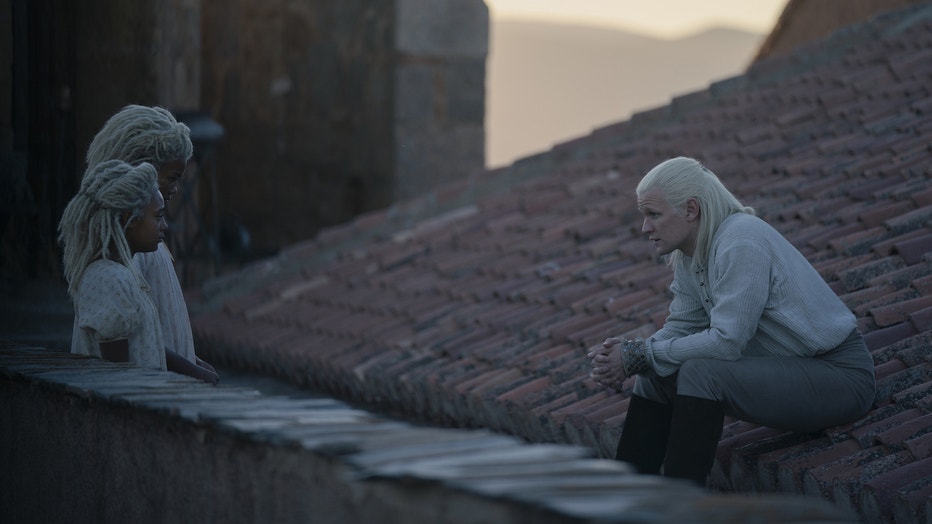 RELATED: ‘House of the Dragon’ 101: What’s up with Targaryen incest?

At first, the problems in this Targaryen-Velaryon household are mostly interpersonal. Melancholy Daemon and homesick Laena have a loving but complicated marriage, while Rhaena feels like an outsider because her dragon egg never hatched, leaving her as the only non-dragonrider in her immediate family. But things take a turn for the tragic when Laena loses her life in childbirth (more on that in the next section), leaving Daemon and his daughters without the loving mother who held their family together.

Gone but not forgotten: Lady Laena and Ser Harwin 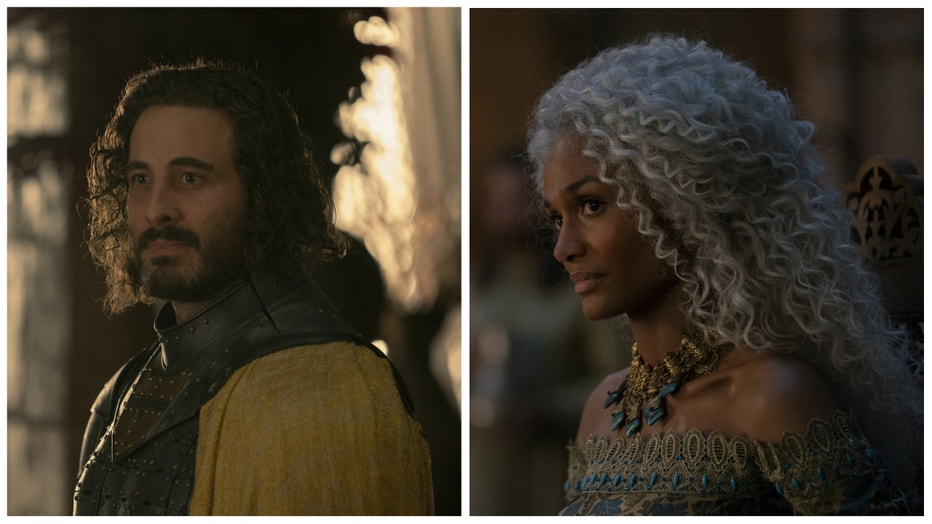 One of the downsides of the show’s time-jumps is that we don’t get to spend a ton of time with doomed supporting characters before they’re killed off. So it’s a testament to Ryan Corr and Nanna Blondell that they make Harwin and Laena feel like such fully realized people in the span of just one episode. They’re two of the warmest, kindest, most genuinely noble characters in the "House of the Dragon" universe, which makes them fascinating romantic foils for the pricklier Rhaenyra and Daemon. And in a twisted bit of fate, they both suffer fiery deaths this week.

Laena’s death is a particularly unique kind of tragedy. Like Viserys’ first wife Aemma (Sian Brooke) in the season premiere, Laena is faced with a deadly childbirth scenario in which the baby simply won’t come. Unlike Aemma, however, the still-pregnant Laena chooses how she would like to die: in a fiery blaze of glory from Vhagar, the beloved dragon she claimed when she was 15 years old. "At my end I want to die a dragonrider’s death," Laena tells Daemon earlier in the episode. At least she gets that much.

Sadly, Harwin’s death lacks even that kind of agency. When his connection to Rhaenyra and her kids makes it untenable for him to remain in King’s Landing, he sets off to take his place at his family home of Harrenhal. Unfortunately, a deadly fire claims his life — along with the life of his father Lyonel Strong (Gavin Spokes), the loyal Hand of King Viserys. And while the fire is publicly assumed to be an accident, the truth is far darker. 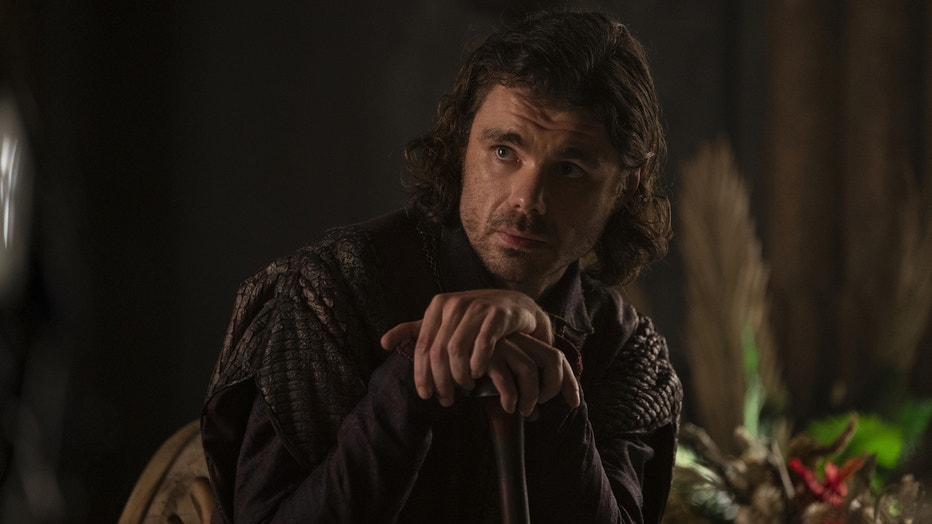 Indeed, while last week’s episode introduced Harwin’s brother Larys Strong (Matthew Needham) as a scheming Littlefinger-type whispering in Alicent’s ear, "The Princess and the Queen" ups the ante in a major way. Like an enlist-some-criminals-to-burn-your-own-father-and-brother-alive type of way.

Larys’ murder plot not only makes him the new Lord of Harrenhal, it also gives him leverage over Alicent. Apparently Larys and the queen have been enjoying private dinners/rant-sessions these past 10 years. Only this time around, Larys decides to interpret Alicent’s off-handed wish that her father Ser Otto (Rhys Ifans) could return as Hand of the King as an order to kill off Lyonel. And that leaves the morally righteous Alicent absolutely aghast when she realizes what she’s gotten herself into. (Between Larys and Ser Criston, Alicent is definitely in need of some less psychopathic allies.)

WATCH FREE ON TUBI: Ian McKellen schemes in "Richard III" — get the app

"The Princess and the Queen" ends with Larys laying out a sentiment that seems likely to be a major theme for the rest of the series: "What are children, but a weakness? A folly? A futility?" he asks. "Through them, you imagine you cheat the great darkness of its victory. You will persist forever, in some form or another. As if they will keep you from the dust. But for them you surrender what you should not. You may know what is the right thing to be done, but love stays the hand. Love is a downfall."

Cheerful words to kick off the final four episodes of the season!

Next week: The pursuit of legacy

Debts are paid and true natures are revealed.

Binge while you wait: "Shameless," streaming free on Tubi

Shameless (2004-2013): Before "Shamless" was a hit Showtime series starring Emmy Rossum and William H. Macy, it was a British dramedy featuring (among others) a young James McAvoy. Set on the fictional Chatsworth council estate in Manchester, "Shameless" chronicles the lives of the Gallagher family and their neighbors, zeroing in on the nuances of British working-class culture. Frank Gallagher (David Threlfall) is an alcoholic single dad trying (and mostly failing) to raise his six kids right. Instead it’s his eldest daughter Fiona (Anne-Marie Duff) who actually keeps things in order. "Shameless" deploys such a unique tone that it even managed to win both Best Drama Series at the BAFTA TV Awards and Best TV Comedy Drama at the British Comedy Awards. Rated TV-MA. 11 seasons, 139 episodes. Also featuring Rebecca Atkinson, Alice Barry.

How to watch "Game of Thrones: House of the Dragon" episode six

The first six episodes of "House of the Dragon" are currently streaming on HBO Max. They’re also available On Demand for HBO subscribers.

When is the next episode of "Game of Thrones: House of the Dragon"?

Episode seven of "House of the Dragon" premieres on HBO on Sunday, Oct. 2 at 9 p.m. ET/PT. It will also stream on HBO Max at 9 p.m. ET/6 p.m. PT — so West Coast fans can watch along simultaneously. New episodes air weekly through Oct. 23.