Trump: Houses of worship to be deemed ‘essential’

President Donald Trump said he is correcting an injustice as he unveiled new guidance for reopening churches and other houses of worship during an announcement Friday afternoon at the White House.

WASHINGTON (FOX News) - House Republicans filed a lawsuit Tuesday against Speaker Nancy Pelosi, D-Calif., to block a system of proxy voting put in place during the coronavirus pandemic on the grounds that it is unconstitutional.

Proxy voting would allow House members to vote on another person's behalf if they are not able to be physically present at the Capitol, an unprecedented exception for an unparalleled health crisis.

At least 59 Democrats have submitted letters to the House Clerk's office to authorize their vote to be cast by proxy. Meanwhile, GOP lawmakers have said they will be in the Capitol to cast their votes.

Not a single Republican supported the measure as it passed earlier this month, arguing that the Constitution requires a quorum, or a majority, of lawmakers to be physically present in order to vote on measures, thus concluding that the proxy system is unconstitutional. Republicans also worry that the system concentrates too much power in the hands of only a few members.

House Minority Leader Kevin McCarthy, R-Calif., called the new voting rules "a dereliction of our duty as elected officials," and argued that "a small number of members dictating the businesses of the whole House while the people’s voice is diluted" would be a dangerous precedent to set.

The 208-199 vote, over strong Republican opposition, advances what boils down to a campaign-season display of Democratic economic and health-care priorities.

McCarthy is at the helm of the lawsuit filed in the U.S. District Court in Washington, D.C., with the support of 20 other members of his party -- including Rep. Chip Roy from Texas, House Minority Whip Steve Scalise of Louisiana and GOP Conference Chairwoman Liz Cheney from Wyoming, as well as four constituents.

"It's simple: one representative should equal one vote. We can't let her get away with this," Scalise tweeted Tuesday

Pelosi called the lawsuit a "sad stunt" intended to "delay and obstruct urgently-needed action to meet the needs of American workers and families during the coronavirus crisis."

The speaker also argued that past rulings by the Supreme Court have upheld that the Constitution allows each chamber of Congress to set its own procedural rules. For proxy voting, the House sergeant-at-arms and the attending physician have to notify lawmakers 24 hours in advance of invoking remote voting and the rule will stand for up to 45 days once it has been invoked. 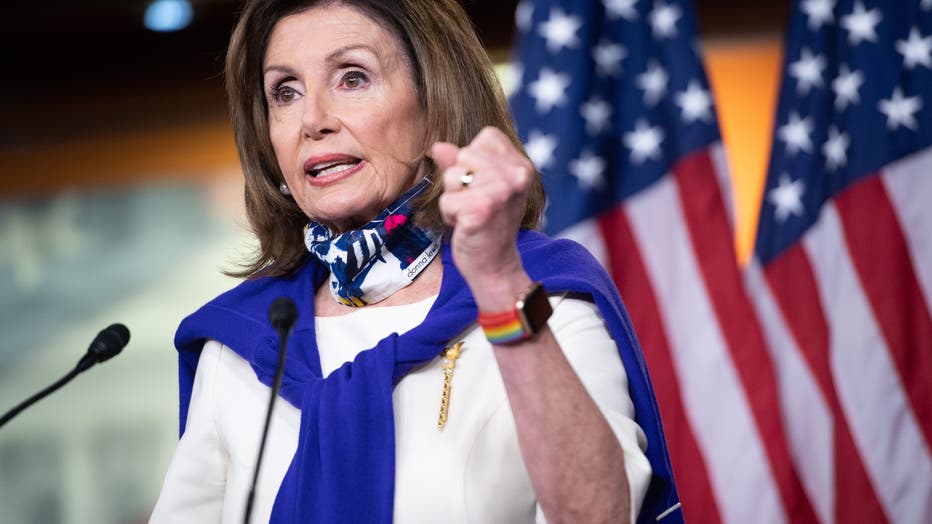 FILE - US Speaker of the House Nancy Pelosi, Democrat of California, speaks during a press conference on Capitol Hill in Washington, DC, May 21, 2020. (Photo by SAUL LOEB/AFP via Getty Images)

“As our nation approaches the heartbreaking milestone of 100,000 lives lost to COVID-19, House Republicans must stop their dangerous obstruction and join Democrats to save lives, defeat the virus and grow the economy,” Pelosi said in a statement Tuesday.

"The rule change to allow remote voting in order to maintain public health fits within those bounds," House Majority Leader Steny Hoyer said. "We should not endanger public health when technology can enable us to meet remotely – just as Senate committees, the Supreme Court, and businesses and schools across the country have done over the past few weeks."The new voting system will likely take place as early as this week, and Republicans heading the lawsuit say they doubt the lawsuit will do anything to stop the votes from proceeding.