A Houston family were shocked to see dozens of bats pour out of her home. FOX 26 Reporter Damali Keith

HOUSTON - It’s bat season, but one Houston woman didn’t have to look at a calendar to figure that out. The bats took up residence inside her Northeast Houston home. How would you like those uninvited house guests?

People actually travel to Texas from all over the world to see our bats because our state is home to 32 of the 47 species of U.S. bats. It was an entire colony of Mexican Free Tailed bats that moved into Lorie Stafford’s Houston home.

"Look at...what?  Are you kidding me?" You can hear Stafford’s husband yelling on the video as bats, one after another, stream out of their Northeast Houston home.

Mrs. Stafford first thought birds were living in their wall when she heard "Peep, peep, peep noises and scratching". So she called Wildlife Control Officer Jerry Stockton, owner of Humane Wildlife Control Specialists, who has been a "critter getter" for years.

"I catch snakes, possums, skunks, armadillos". He’s even slayed a dragon. "A bearded dragon. It’s like a big lizard, about this big," Stockton demonstrates with outstretched arms.

When Stockton showed up to the Stafford's house he immediately knew a colony of bats were living there.

"He says you see this black stuff on the ground. That’s poop. It looked like dirt. It looked like mulch," Mrs. Stafford explains. "Also smell is a real big giveaway because guano has a real distinctive odor," Stockton adds.

A dark spot at the top of her house was also unmistakable.

"Bats, they sweat and their glands produce a lot of oils. As they go in and out from the same spot over and over again, they’re rubbing that off onto that surface. The entry point was only about three quarters of an inch wide," Stockton explains.

"I’m one that goes all out for Halloween. So my brother in law he’s like oh that makes sense. He’s like if anybody’s going to have bats it’s you," Mrs. Stafford laughs.

To get the hundreds of bats out of their house, Stockton used a cone that allows the bats to fly out but they can’t get back in. Then he sealed the less than an inch opening so they wouldn’t return.

Turns out the bats have likely spent several seasons right there in the Stafford’s wall.

"My neighbor, he’s outside a lot more than we are in the front yard, and he says he’s been seeing them for years".

Bats can cause thousands of dollars in damage to a home and to your wallet to have them removed.

Now that the Stafford’s are bat free, Stockton is off to do battle with, well, according to the side of his truck, creatures that creep most people out but not him.

"If I come across a Zombie, I might change my position on what creeps me out," laughs Stockton, who says most of us make the mistake of having tiny openings in our home where critters come in. He says all of those areas have to be sealed to keep that from happening.

Bat season in Texas is from about February to October when they migrate to warmer climates for the winter.

EVERYTHING YOU'VE WANTED TO KNOW ABOUT TEXAS' BATS 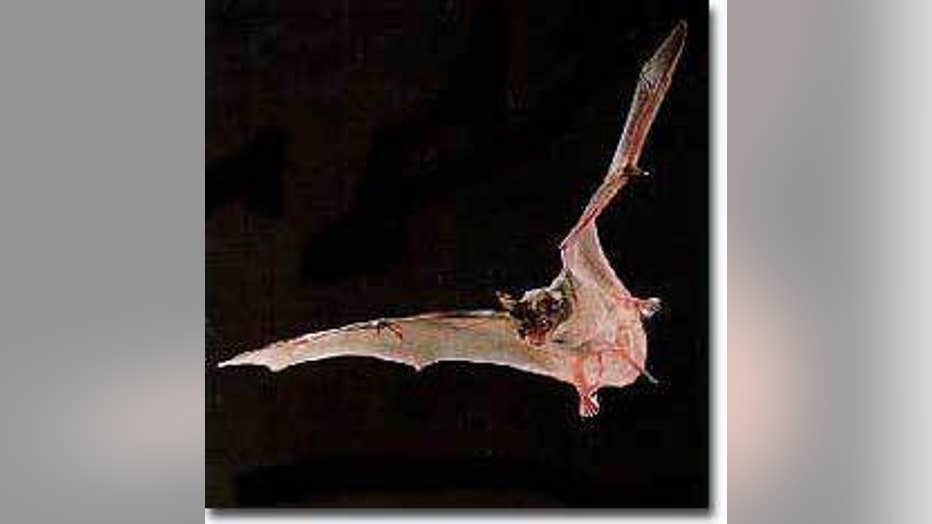 In most parts of the state, Mexican free-tailed bats are migratory and spend the winters in caves in Mexico. They begin their migration to Texas in February and by early spring female bats begin to form large maternity colonies where they will raise their young.

There are only a small number of suitable sites for these large maternity colonies which require high humidity and temperature levels. In June, mother bats give birth to one pup. Male bats do not help in raising the young and form smaller bachelor colonies. Bats are mammals so the pups are born live and weigh about 25 percent of their mother's weight. They feed from their mother's rich milk located in mammary glands found under each of her wings. The Mexican free-tailed bats' milk is so rich that the babies grow fast and are ready to fly within five to six weeks of birth. It is estimated that baby Mexican free-tailed bats roost in densities of up to 500 babies per square foot. It is amazing to think that mother bats are able to find their own baby amongst thousands of pups by using their sense of smell and by knowing the sound of their pup's call.

By mid-August the pups begin flying. It is at this time of the summer when the most spectacular bat emergences often occur as the colony size might easily double.
Mexican free-tailed bats can fly up to 100 miles round trip in an evening looking for food. They are built for speed with short fur and long narrow wings and can fly up to 60 miles per hour with a tail wind. They have been observed feeding up to 10,000 feet while searching for food.

Mexican free-tailed bats are very important for keeping crop pests in check as they can eat up to two-thirds of their body weight in insects each night, especially while lactating and feeding young. With the large numbers of agricultural pests they eat, research has demonstrated that these bats can save farmers up to two applications of pesticides per year.

When the first cold fronts start pushing through the Texas Hill Country in late October to mid-November, the Mexican free-tailed bats begin their migration back to Mexico.