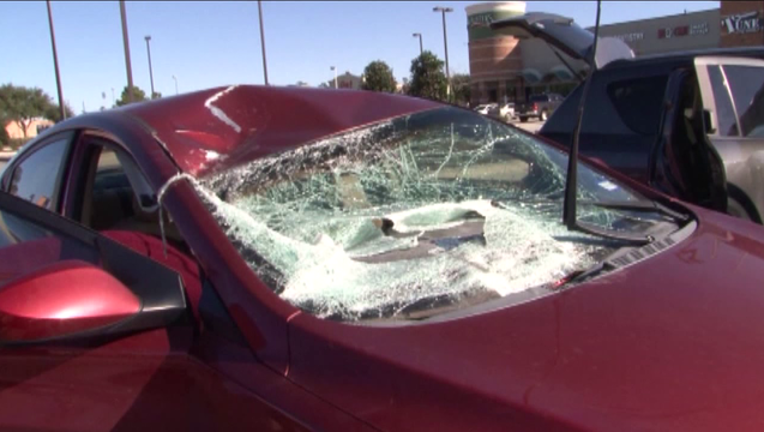 SPRING, Texas (FOX 26) - We’ve all been in a situation driving behind a vehicle that is carrying a load and feeling uneasy that something might come loose. This became a reality for one northwest Houston woman. She says she’s just happy to be walking away with her life.

Kaneisha Lynn was driving to work this morning on I-45 near Cypresswood when she saw a tire fly onto the highway, hit the median and then it came straight towards her car.

“It was a pretty loud boom. By then I had already slowed down. I always told myself not to panic in a situation like this because I’m not driving for myself, I’m driving for myself and those around me," she tells FOX 26.

It was a lot to take in for the 28-year-old, all while dealing with the loud sounds of glass smashing around her. Only Kaneisha’s car was hit by the tire, and during a busy morning rush hour, it was a miracle she didn’t crash into anyone else.

“You know, I’m just grateful that God said 'it’s not her time'. I just celebrated my 28th birthday two days ago so I am very grateful to be to even speak with you all to tell the story," she says.

She walked away with a few cuts on her face, finger, and her foot is a bit sore. She’s thankful her 4-year-old son wasn’t in the car at the time. She’s just looking forward to spending Christmas with her family, and wanted to spread a message to other drivers out there.

“Pay attention! That is the biggest thing, because had I not been paying attention, I mean I probably wouldn’t be here,“ she says.

She tells us she believes the tire came from a vehicle that was driving along the feeder road. As of yet, there is no word on who the tire belonged to.