TAMPA, Fla. - They scroll through her social media accounts, analyzing photos and Google Maps. An army of digital detectives is unofficially on the case of Gabby Petito, whose story has captivated the internet.

Haley Toumaian, a TikTok user out of California, says she was drawn to the 22-year-old’s disappearance and death because she shared so many similarities with Petito.

"We’re around the same age. I’m also engaged. I’m also a Youtuber, so I really saw a lot of myself in what was being shared about her," Toumaian said. "So my interest in missing persons, unsolved cases, and that culminated into me posting a video." 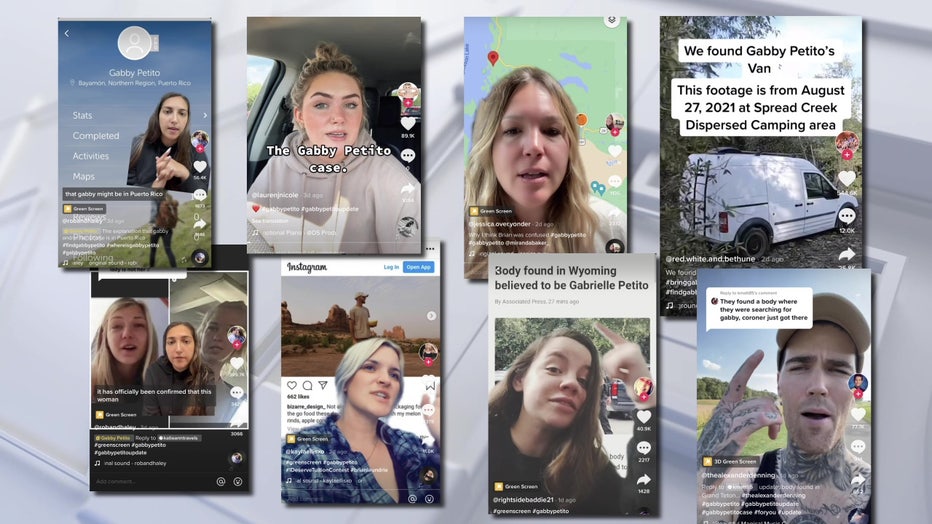 Toumaian posted her first video about Gabby Petito six days ago, and since, it’s been viewed more than 700,000 times. She’s posted dozens more on the case and they’ve received millions of views.

"I personally have tried to really focus on sharing facts and things that were being talked about without coming up with crazy theories," she said.

How the new 911 calls fit into the timeline

We're now hearing details of the 911 call that prompted a police stop before Gabby Petito -- and, later, Brian Laundrie -- disappeared.

Former homicide detective Ted Williams says the dedication by the online community to Petito’s case is uncanny – and with a case that spans multiple states, it’s a boost for law enforcement.

"It may be that, in those millions of internet detectives performing what they believe is a service, it may be that one nugget that law enforcement really needs," Williams said.

On Sunday, it was a travel blogger who helped identify the location of Gabby’s van. The family, originally from Tampa, captured it with their GoPro camera as they traveled through Grand Teton National Park in Wyoming.

The Bethunes, who live in the Tampa area, say they spotted what is believed to be Gabby Petito's camper on August 27. On Sunday, they submitted their video to the FBI -- which also happens to be the birthday of their son, Ethan, who died in 2011. ‘He would’ve turned 17, and I fully believe that Ethan had a hand in bringing Gabby home for sure.’

"That was essential for pinpointing the area for authorities where unfortunately we believe Gabby’s body has been found," said Williams.

Social media has played a role in tracking suspects for years – but it’s not always beneficial. Back in 2013, after the Boston Marathon bombing, several people were falsely identified as the suspects.

Sometimes, it’s a mistake, but other times, people are simply sending in false tips.

Utah police released body camera footage showing their encounter with Gabby Petito and her fiancé, Brian Laundrie, before Gabby disappeared. A witness called officers after seeing the couple get physical. Domestic violence experts looked at that video and said Brain’s lack of acknowledgement of any wrongdoing speaks volumes to them.

MORE: Gabby Petito: Police speak with TikTok user who claimed to give boyfriend Laundrie a ride

But for years, America has been engrossed with true crime stories – some would say even romanticizing them.

"We’ve always wanted to be out there and solving crime," Williams said. "It is just the American way, something instinctive in us to want to solve crimes."

People go missing all of the time, Williams says, but what’s made this case different is that Gabby gave us almost daily insight into her life.

Tracking the timeline of Gabby's disappearance

"On a daily basis, she’s putting out where she’s at, how she’s enjoying the trip, etcetera etcetera," he said.

Toumaian also believes her large digital footprint had a huge impact on the Internet’s interest.

"Us being able to see so much of her life led a lot of people online to be so invested in it because we could analyze a lot more," she said.

When those posts stopped, that’s when the work of the digital detectives began.