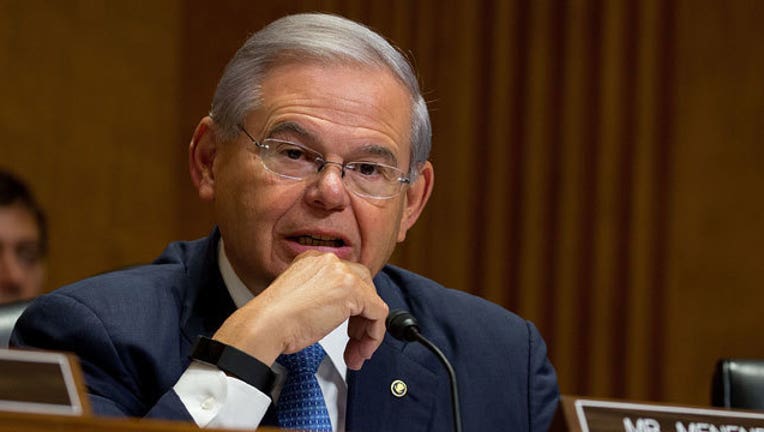 NEWARK, N.J. (AP) - U.S. Sen. Bob Menendez told reporters, "Not once have I dishonored my public office," before he entered a courthouse for the start of a federal corruption trial Wednesday that could threaten his political career and potentially the makeup of a deeply divided U.S. Senate if he's convicted.

Flanked by his two adult children and at times choking back tears, the New Jersey Democrat said, "I started my public career fighting corruption - that's how I started - and I have always acted in accordance with the law.

"And I believe when all the facts are known, I will be vindicated," Menendez said.

Menendez and Florida ophthalmologist Dr. Salomon Melgen are charged with a conspiracy in which, prosecutors say, Menendez lobbied for Melgen's business interests in exchange for political donations and gifts that included luxury vacations, flights on Melgen's plane and stays at his private villa in an exclusive Dominican Republic resort frequented by celebrities including Beyonce and Jay Z.

The men both pleaded not guilty. Defense lawyers say that the trips described as bribes were examples of friends vacationing together, that most of Melgen's contributions went to committees Menendez didn't control and that he didn't control the people he lobbied on Melgen's behalf.

Opening statements are scheduled for Wednesday, but three more jurors needed to be chosen first. One of those jurors is to replace one who told the court last week they couldn't serve, and Judge William Walls ruled Wednesday that two more alternate jurors should be added.

The morning featured some sparring between defense attorneys for Menendez and Walls. Attorney Ray Brown accused Walls of disparaging Menendez in his opinion denying Menendez's motion to postpone the trial on days of important Senate votes.

Walls also chided defense attorneys for filing a motion on what to include in jury instructions at the end of the trial.

When attorney Abbe Lowell pointed out that the motion was filed according to the judge's order from last December, Walls replied, "Fine. Bill me."

Menendez is up for re-election next year. If he is convicted and steps down or is forced out of the Senate by a two-thirds majority vote before Gov. Chris Christie leaves office Jan. 16, the Republican governor would pick a successor. A Democrat has a large polling and financial advantage in November's election to replace Christie.

Menendez said he plans to be at the trial daily but will decide whether to return to Washington to cast votes in the Senate based on the issue and whether his vote could make a difference. Walls last week ruled against an attempt by Menendez to pause the trial on days when important Senate votes were scheduled.

The Republican National Committee has already launched an online campaign seeking to pressure Menendez's Democratic colleagues to vote him out of office if he's convicted. An ad points to Democrats calling for Republican Sen. Ted Stevens to resign immediately after he was convicted of corruption in 2008."Why would it be any different now?" the ad asks.

Stevens was the last sitting U.S. senator to go on trial. His conviction was overturned after a Justice Department investigation concluded prosecutors had committed misconduct.

Among the gifts prosecutors say Melgen gave Menendez were flights on Melgen's private jet, vacations at Melgen's private villa in the Dominican Republic and a three-night stay at a luxury Paris hotel valued at nearly $5,000.

Melgen also directed more than $750,000 in campaign contributions to entities that supported Menendez, according to the indictment, which alleges they were inducements to get Menendez to use his influence on Melgen's behalf.

Prosecutors say that lobbying included a three-year effort to help Melgen avoid paying $8.9 million for overbilling Medicare, a meeting with an assistant secretary of state to help Melgen in a contract dispute over port screening equipment in the Dominican Republic, and helping one of Melgen's girlfriends and her sister get into the country after their visas were denied.

Melgen's sentencing in a separate Medicare fraud case has been delayed until after his trial with Menendez.

Jurors will have to wade through complex legal concepts, including whether Menendez's interactions with executive branch officials were "official acts" as defined under federal bribery statutes. That will depend on how a 2016 U.S. Supreme Court decision reversing the bribery conviction of former Virginia Gov. Bob McDonnell, a Republican, is interpreted.

Menendez has made a steady stream of public appearances to tout his legislative priorities since his indictment and harshly criticize many of President Donald Trump's policies, including Tuesday's announcement that he will wind down a program protecting young immigrants from deportation.

The indictment also hasn't stopped Menendez from receiving financial support. He has raised more than $6 million since his indictment, between his legal defense fund and campaign, according to a review of federal filings.