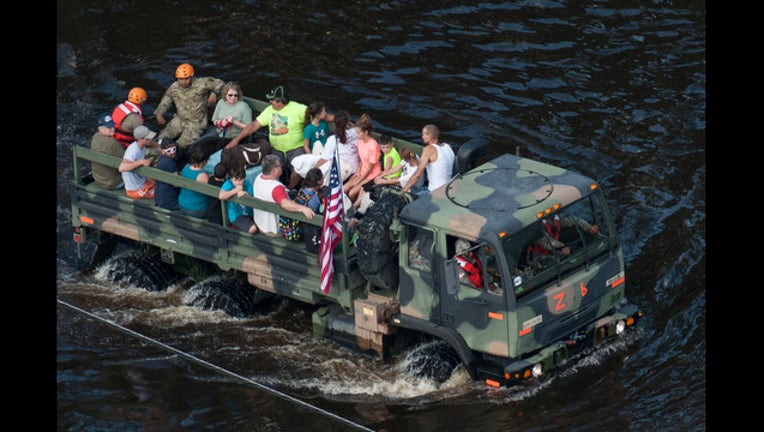 PASADENA, Texas (AP) -- The line snakes on and on, along a wall inside the shopping mall, each person in search of help after a hurricane swamped their town.

As they wait, they ruminate.

Samantha Cusson, a 31-year-old mother of two, found out just before Harvey hit that she's pregnant with a third. She worries about finding a doctor for checkups and wonders when the Subway shop she works at will reopen. When it finally does, she wonders who she'll find to baby-sit her girls after the storm scattered those she turned to, and how she'll get to work, since her car was flooded. Her next check will be a pittance, the rent is already overdue, and there are no savings.

Most of all, she worries about shielding her children from the reality that washed in.

"I can't show it," she said of her apprehensions. "They're fine because I'm fine."

It's just past 10 a.m. at the makeshift relief center in this community southeast of Houston, and already some 150 people are queued up for supplies. The line stretches through the mall entrance back into a deserted office, where those who wait are presented a checklist of items they need, from toilet paper to blankets to clothing. They'll wind through banks of cubicles where volunteers have sorted clothes into sizes, and amassed all sorts of things -- school supplies, dog food, walkers.

Beth Bronikowsky hopes to find a pair of shoes. After her apartment flooded, the 39-year-old sloshed around barefoot until her stepfather found a pair of aqua shoes for her. She already had enough on her plate, having suffered a stroke that has her walking with a wooden cane and making frequent trips to the doctor. Now, she's preoccupied with the loss of most of her belongings, not to mention the growing stink of mold at home and the nagging feeling she'll have to find a new place.

Her mom, Norma Fexer, says she's lucky to have only 5 inches of water in her southeast Houston home, but her carpets and floors were ruined. Fexer, 65, has no flood insurance and knows she'll have to do the repairs piece by piece, all while worrying another storm could come.

The fountains at the mall aren't sprouting, the coin-operated carousel isn't spinning, and there are no princess-themed parties at the children's birthday spot. But the roped-off line is alive with coming and going, a clatter of carts jangling across the floor tiles as people push their newfound help outside.

Many saw a foot or less of flooding in their homes and are quick to express concern for those who were hit even worse. But most say they saw struggle before the storm, too, and this has only made it worse.

Candis Cortez, a 46-year-old scaffold builder at a chemical plant, was still processing the loss of her husband last year to cancer. She moved his ashes to a top shelf of a closet and prayed it didn't cave in. She's still struggling to pay the $7,800 bill for his funeral and learning to be without him after a 27-year marriage. Harvey has made her feel even more vulnerable.

A tin of her husband's Skoal is still tucked away in the fridge's butter compartment, and his closet is still full of his clothes. The smell of the Polo Blue cologne he wore and the Marlboro reds he smoked had long still hung in the air -- now sullied with the stench of rot. The boilers in her building got flooded; hot showers are no longer an option. She hopes to pick up some towels here, after using all hers to sop up water that just kept sprouting onto the floor. Most of her furniture, her laptop and her phone were among the casualties, and she still squishes on a carpet that won't seem to dry. She thinks she might need therapy when this is all over. When she thinks of what she's lost, she just thinks of the man she loves.

"All those things," she said of her lost possessions, "my husband worked his butt off to buy."

In Beaumont, two hours northeast, people wait in a mile-long line for bottled water. In San Antonio, three hours west, long waits popped up at gas stations. As commerce began crawling back to normal in parts of Houston, lines formed at fast-food restaurants. And in idle moments, the fears of Harvey's victims creep to the surface.

Here, volunteers in orange vests are swarming. They help carry black garbage bags of clothes and cases of water. Some arrive beaded with sweat after walking in the 91-degree heat. A blast of cool air greets them as they walk through the glass doors.

The day wears on and the pace begins to ease -- but still, people arrive in search of a hand.

A school bus driver who needs water and juice wonders how she'd get her diabetic son to the hospital through flooded streets. A young mother pushes her 4-month-old son and 20-month-old daughter in a double stroller, in search of diapers and formula, and she worries they'll be sickened by the growing mold in their apartment. A forklift operator hopes for food to make ends meet and fears his company will continue to be closed.

Each of them stands in line, waiting and worrying.