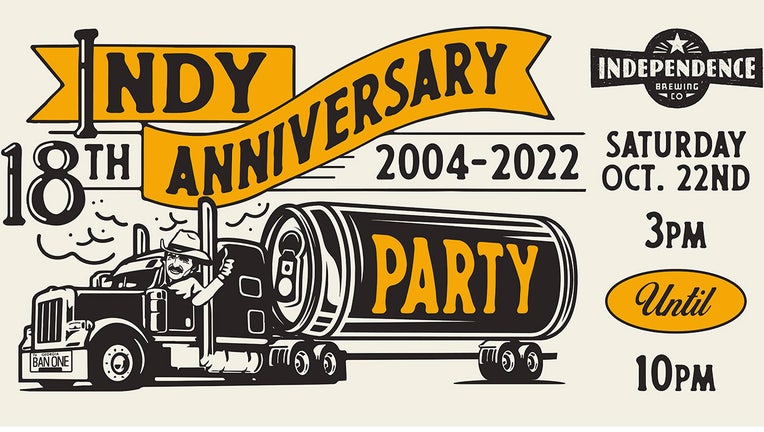 AUSTIN, Texas - Independence Brewing Co. is celebrating its 18th anniversary with a state fair-themed party on Saturday, October 22 from 3 p.m to 10 p.m.

The party called "Cheers to 18 Years of Hauling Beers" will be held at Independence Brewing's taproom in southeast Austin. The address is 3913 Todd Ln. #607.

The event is free and open to the public, but guests can RSVP here to reserve a custom anniversary glass and t-shirt while supplies last.

As a bonus, Independence Brewing Co. is donating proceeds from the October 22 event to Pink Boots Society, which was created to assist, inspire, and encourage women and non-binary individuals in the fermented/alcoholic beverage industry to advance their careers through education.

"We couldn’t think of a better way to celebrate our 18th year in business than by doing what we do best — making great beer," said Amy Cartwright, co-founder and President of Independence Brewing Co. in a news release.

"We’ve always been a team of independent thinkers and drinkers, and as such, we’re constantly innovating. We’re excited to share some of our latest creations at the party alongside some old favorites," Cartwright adds.

18 different libations will be showcased at the party: 13 beers and five non-alcoholic sparking waters infused with Delta 8 and Delta 9. Some are old favorites and others will be revamps of popular past seasonals.

Attendees will cast votes for their favorite beer and the night's winner will become the next tap room-exclusive release.

In keeping with the theme, onsite food truck Hajima Street Kitchen, which specializes in Korean street food, will prepare all culinary offerings which include several fried items like Oreos, Twinkies, Spam musubi, and pumpkin spice beignets.