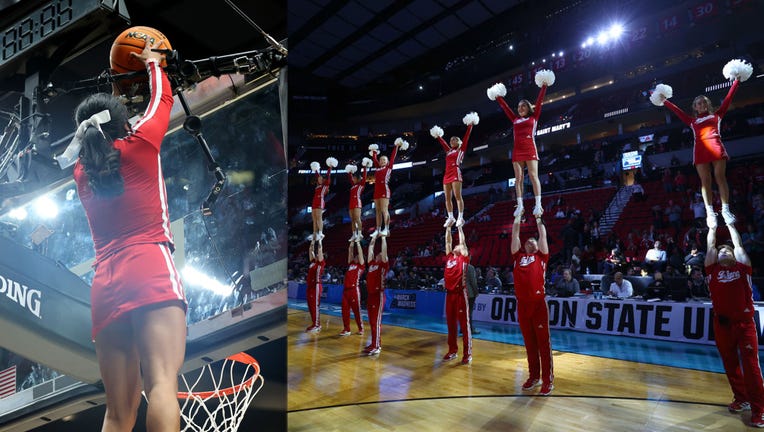 (L) A cheerleader retrieves the ball after it became stuck on top of the backboard in the first-round game between the St. Mary's Gaels and the Indiana Hoosiers in the 2022 NCAA Men's Basketball Tournament at Moda Center on March 17, 2022, in Portlan

PORTLAND, Ore. - An Indiana cheerleader had the biggest rebound of the game on Thursday night against No. 5 Saint Mary’s after rescuing a stuck basketball between the backboard and the shot clock.

Early in the second half, the ball became stuck and tall players from each team tried unsuccessfully to shake it loose. A ref even stood on a folding chair to try and poke it free, to no avail.

Then, Indiana's resourceful cheer squad came to the rescue with a cheerleader being hoisted up by a male counterpart. The pair was able to rescue the ball, prompting the arena to erupt with cheers.

"What a play!" the announcer yelled. "The cheerleader saves the day! And that is her one shining moment!

"This place is on its feet!" he continued over the sound of screaming fans. "The cheerleader is the hero in Portland!" 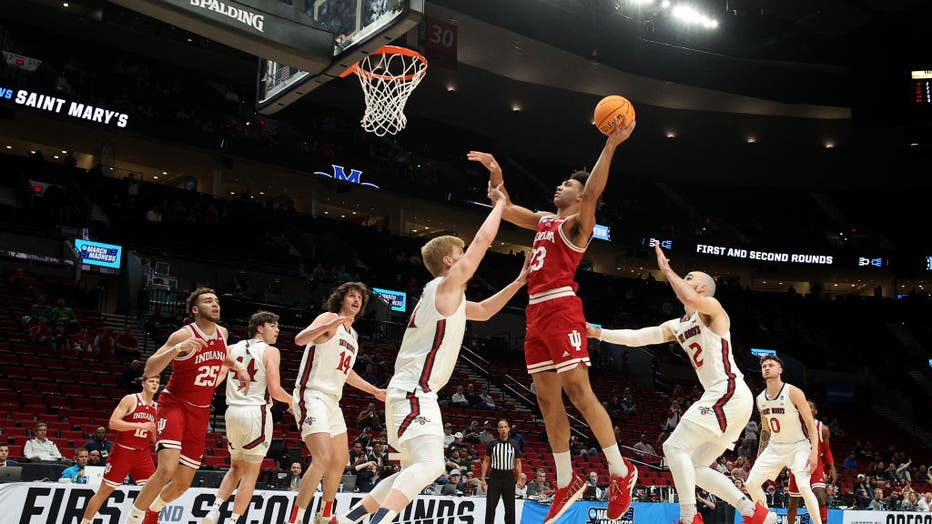 Trayce Jackson-Davis #23 of the Indiana Hoosiers goes up for a shot against Matthias Tass #11 and Tommy Kuhse #12 of the St. Mary's Gaels in the first round game of the 2022 NCAA Men's Basketball Tournament at Moda Center on March 17, 2022 in Portlan

Saint Mary's took advantage of No. 12 seed Indiana's grueling recent schedule and notched an 82-53 victory in the first round of the NCAA Tournament. Tommy Kuhse added 19 points and six assists for the Gaels (26-7), the only team to beat top overall seed Gonzaga in the West Coast Conference this season.

Saint Mary’s will next face No. 4 seed UCLA, which rallied to beat Akron 57-53, in a second-round game Saturday.

A history of the term March Madness in basketball

The term March Madness got its origins in Illinois surrounding the annual tournament of high school boys basketball teams, according to the Illinois High School Association -- which sponsored the event.

Get in the March Madness spirit with basketball docs streaming (free!) on Tubi

Hoop Innovators: The Pioneering Visionaries Who Changed the Game of Basketball (2020): A look back on the 60+ years of friendship between two basketball icons who innovated the sport while enduring countless highs and lows together. Featuring Dennis Murphy, Bill Sharman.

Life Without Basketball (2019): A controversial court ruling forces a Muslim American college basketball star to choose between her faith and her dreams to play professionally. Featuring Bilqis Abdul-Qaadir, Minky Worden.

More sports shows and flicks to catch on Tubi