WASHINGTON - The Internal Revenue Service said it will distribute about 50,000 “catch-up” stimulus checks that were wrongly withheld next month.

The payments will go to people whose portion of the initial Economic Impact Payment under the CARES Act was diverted to pay their spouse's past-due child support, despite having filed Form 8379, Injured Spouse Allocation.

With the form, the “injured” or negatively impacted spouse on a jointly-filed tax return can file to retain their share of a joint refund that was seized to pay a past-due federal tax, child support or other obligation, according to the financial site Investopedia.

The checks are expected be mailed in “early-to-mid September,” along with their 2019 federal income tax return, or in some cases, their 2018 return. The qualifying spouses do not need to take any action to get their money.

For those who did not file a Form 8379 and also saw their stimulus payment diverted to pay their spouse’s debt, the IRS says no action is needed.

“The IRS does not yet have a timeframe but will automatically issue the portion of the EIP that was applied to the other spouse's debt at a later date,” the agency said in a statement. 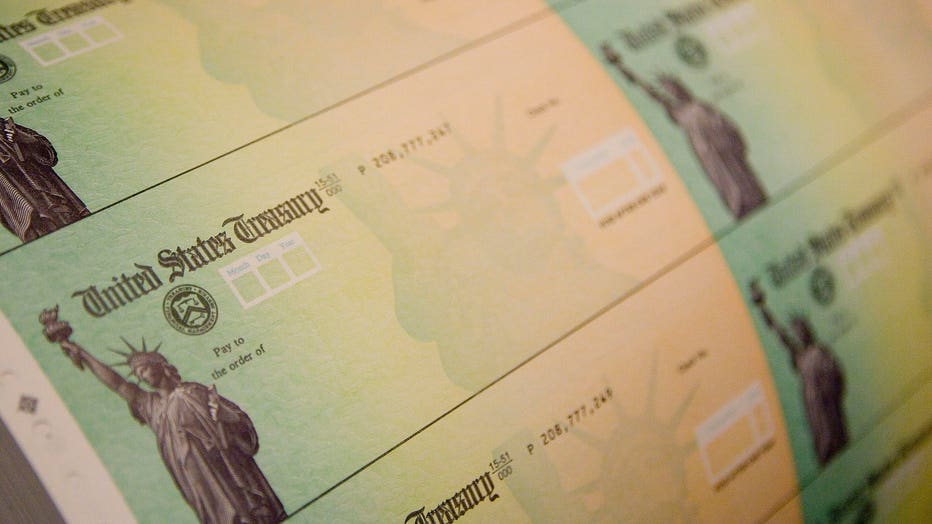 Economic stimulus checks are prepared for printing at the Philadelphia Financial Center May 8, 2008 in Philadelphia, Pennsylvania. (Photo by Jeff Fusco/Getty Images)

Taxpayers can check the status of their stimulus payment by using the IRS’ Get My Payment tool.

In April, the federal government began sending one-time direct payments of $1,200 per adult making up to $75,000 a year as part of the $2.2 trillion CARES Act passed by Congress to offer financial help during the pandemic.

Those who were eligible to receive the stimulus payment may have received it by either a direct deposit to their bank account or a paper check in the mail. The U.S. Treasury Department also sent the payment to some in the form of a prepaid debit card.

IRS Commissioner Chuck Rettig testified at the end of June that the agency had distributed roughly 160 million stimulus payments since April — worth $270 billion. But millions of Americans are still awaiting the arrival of their first $1,200 cash payment according to lawmakers on the House Ways and Means Committee.

RELATED: Still haven't received your first $1,200 stimulus check? What you need to do

Rettig testified that the IRS was dealing with a backlog of paper tax returns and was focused on trying to send stimulus payments to those filers.

Meanwhile, negotiations over a new, large coronavirus relief package have stalled between the White House and congressional Democrats. White House Chief of Staff Mark Meadows told Politico on Wednesday that he is not optimistic about reaching a new deal before the end of September.

RELATED: For Americans waiting on coronavirus aid, no new relief in sight