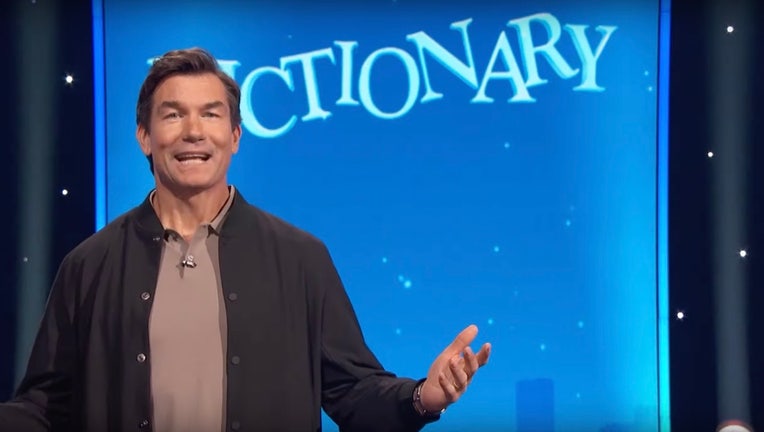 Chicago - Jerry O’Connell has been acting since he was a tween; he landed his first major role in Rob Reiner’s "Stand By Me" when he was 11, and has worked steadily in films like "Scream 2" and shows like the sci-fi cult hit "Sliders" ever since.

But now, he’s expanding his repertoire to "game show host" with "Pictionary," a cozy competition series based on the iconic Mattel board game that’s delighted friends and family since 1985. Airing on FOX stations this fall, the show (hosted by O’Connell) takes two teams of contestants — including one celebrity guest and two non-celebrity teammates — and pits them against each other to see who can guess what their team member is drawing. Whoever wins gets cash and other prizes.

It’s the kind of high-energy game O’Connell can keep afloat with the bright, gregarious energy he’s cultivated across decades of being in the public eye. Over the last few years, he’s parlayed his charm into guest-hosting gigs on "The Talk" (which he’s now a full cast member on, replacing Sharon Osbourne) and other game shows like the upcoming "The Real Love Boat." There, he and his wife, fellow actor Rebecca Romijn, host contestants on a luxury Princess Cruise intended to help them find true love.

And, of course, he and Romijn are both first officers on their own successful "Star Trek" shows — he as the quippy, chiseled Commander Ransom on the animated "Lower Decks" and she as the rebooted version of Number One on "Strange New Worlds."

FOX Television Stations sat down with O’Connell between "Pictionary" tapings to talk about expanding such a well-known game to the television screen, what to do about more-than-PG sketches and who in his household might just be the superior Starfleet officer.

WATCH FREE ON TUBI: The reality competition series "LEGO Masters" — get the app

You’ve been an actor since childhood, but you’ve embraced this new role of talk-show host lately between "The Talk" and now "Pictionary" and "The Real Love Boat." When did that transition happen?

It’s funny; I knew I became a host the other day when I was getting ready for school with my children. I usually yell at them to "Get in the car! We’re late!" But I was at the front of the house and found myself going [game show host voice] "C’mon girls, go ahead and get in the car! You can’t be late for school today!" I’m just turning into a host.

I gotta say, I love it. People have fun, we’re giving money and trips away. It’s just fun.

I imagine it takes a similar but distinct set of skills to move from acting to hosting. You’re an entertainer, but you have to maintain the energy in the room — not just for the guests, but the audience and everyone else. Do you feel those skills building as you host more?

I’ll tell you, the most challenging thing about being a game show host are the rules. And money’s involved, there are all kinds of legal stuff.

Yeah! It’s funny, I should rewatch that movie "Quiz Show" about the cheating scandal on the game show. Not that we cheat on "Pictionary," we’d never do that. I couldn’t imagine how you do it.

I remember in one game, the clue was "firewood." And someone said "wood," and I thought that was it! You’re good for 200 points. But then the producer said, "No, the clue was firewood." I thought, isn’t all wood firewood? But apparently, it doesn’t count! You have to be exact, which is the toughest thing about this game.

WATCH FREE ON TUBI: 11 seasons of "Project Runway" — get the app

Is yours a big "Pictionary" house?

My family played it two nights before I got the email that they were looking for a host! My daughters are 13, which is the perfect "Pictionary" age; they’re not quite teenagers, they want to hang with their family, but they’re not so young they don’t know what words are. In that game, my wife [Rebecca Romijn] tried to draw a fireman after a few drinks, and she drew someone with a helmet and water spraying out of the helmet like a hose. It did not look like a fireman, I’ll say that. [Laughs.] I sent that photo to the producer, and we had a good laugh about it.

Part of the fun of "Pictionary" as a game is that, let’s face it, a majority of people can’t draw. I’m one of those people. We work on computers, we don’t write in notebooks, and there’s no more doodling on the side of your notebook daydreaming about Ricky Martin anymore. So a solid 50 percent of the laughs we get on "Pictionary" are about how not great a lot of these sketches are.

WATCH FREE ON TUBI: Jerry O'Connell in "Calendar Girl" — get the app

Befitting the genesis of "Pictionary" as the kind of home game you’d have friends and family over to play, the set itself feels like a cozy living room. Does that impact the energy of the show?

It does! I feel like I’ve redone my basement and invited two celebrities and four contestants down to play. And my mom is upstairs, we’ve got sodas there if anyone wants one. It does have that sort of atmosphere. I don’t know if it’s because games like this helped us all get through the pandemic, but the show has a really homey vibe. I hope that helps with our success.

Paradoxically, because we all spent two-ish years trapped in our homes, I know a lot of folks — myself included — missed having people over for game night. So there’s that vicarious thrill in watching other people get into this frantic party game.

We do have a party; there’s some smack talk going on. People get competitive.

WATCH FREE ON TUBI: "MasterChef Junior" — get the app

Speaking of the quote-unquote "fireman": How does the show handle it when sketches get, perhaps inadvertently, not as safe for primetime?

I’m a huge "Family Feud" fan, and we don’t push it as far as the "Feud" does. But a couple of times, we’ve been right on the line. It’s open to interpretation and how imaginative you are. What that interpretation is, is up to the viewer. Beauty is in the eye of the beholder.

Anyone who’s played enough "Pictionary" knows there’s always that one person who’s freakishly good at "Pictionary." Have you had that experience on the show yet?

You know who? Natalie Morales, my costar on "The Talk," is a great sketcher. In one game, the clue was "train." Most people would just draw a rectangle with two wheels at the bottom, maybe some smoke coming out of a smokestack. But Natalie draws an old-timey 1920s choo-choo. With actual wheels and a coal smokestack. It was art. Some people are just gifted in that way.

Are there sketches you keep? Is there a Hall of Fame the show is building up?

We have a little online thing we call "Epic Pictionary Fails," where I go through some sketches and try to guess what the artist was loosely drawing. I was there for a couple of them, and I still don’t know what they were. It’s like uncovering lost art.

Of course, you’ve also got "The Talk," and a new show with your wife called "The Real Love Boat," where you get to jet off to exotic destinations with contestants looking for love. What was that experience like?

That show is a little bit like "The Amazing Race" because we have challenges with couples competing against each other. It’s also a relationship show, there’s some "Love Island" there. It was really fun. I consume a tremendous amount of reality TV — the old, dirty word; we now call it "unscripted" because television is fancy. So it was fun to host one, especially with my wife.

I’m sure you appreciate that you live in a household where both of you are playing First Officers in currently-running "Star Trek" shows. Does that stir a bit of competition?

[Long pause.] Yes, my wife and I are both Number Ones on Starfleet bridges, and that’s a great honor we both appreciate. And because my "Star Trek" show is animated, and my wife’s show, "Strange New Worlds," is live-action, I do think she believes hers is cooler. She gets to run from Gorn and all that stuff. But…. real "Star Trek" people know that the heart and soul of Starfleet is right there on the "USS Cerritos."

"Pictionary" is now airing on FOX stations across the country. Check your local listings.