Amber Heard was asked to recount an alleged 2015 altercation where she says Johnny Depp hit her in the face several times, pulled her out, and headbutted her. Heard's lawyers also showed the jury several photos that Heard claimed she took after the altercation to document her alleged injuries.

From the witness stand in a Fairfax County, Virginia courtroom, Heard described an alleged sexual assault she said took place over several days while the then-couple was in Australia in 2015.

Heard alleged Depp accused her of cheating on him with movie co-stars including Billy Bob Thornton and Eddie Redmayne, with whom she'd just shot the film "The Danish Girl". Heard has denied those accusations.

Heard said Depp tore off her clothes and repeatedly punched her before he sexually assaulted her with a liquor bottle in an alcohol-fueled rage. 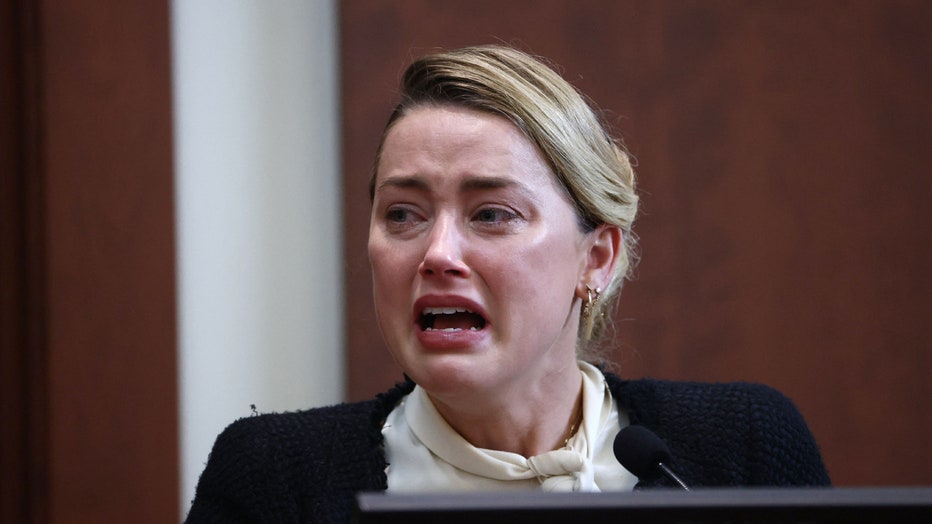 US actress Amber Heard testifies at the Fairfax County Circuit Courthouse in Fairfax, Virginia, on May 5, 2022. - Actor Johnny Depp is suing ex-wife Amber Heard for libel after she wrote an op-ed piece in The Washington Post in 2018 referring to hers

Heard also described bizarre details she alleges followed the attack, including Depp using her torn nightgown to wrap a raw steak that had been left out.

She accused Depp of writing on the walls with blood from his finger that she says he severed during the incident. Depp has accused Heard of causing the injury after she threw a bottle of alcohol at him.

The March 2015 incident in Australia, that happened over three days during the couple's first year of marriage while Depp was filming the fifth "Pirates of the Caribbean" movie, has been disputed and has been a focal point of the trial.

The trial is expected to be on a break from Friday through May 16. Heard is expected to again take the stand when the trial continues. Closing arguments are expected May 27. 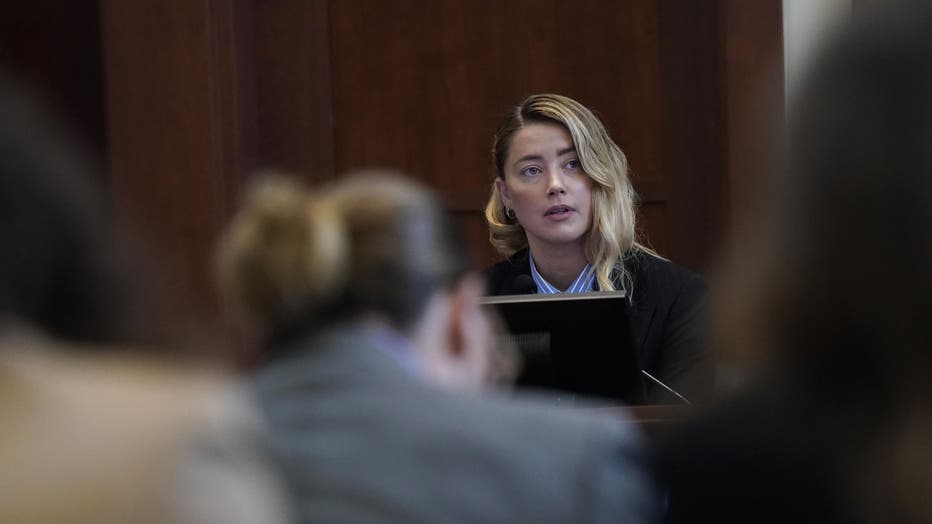 During her testimony Wednesday as she took the stand for the first time in the trial, Heard spoke about how the couple met during their work on the film "The Rum Diary" and how they began dating while doing a press tour for the film's release in 2011.

She said Depp's first act of physical violence against her came in 2013 when he slapped her several times while she looked at his tattoos – specifically one that read "Wino" — an alteration to the lettering he had made when he'd been dating actor Winona Ryder.

Heard also described a 2013 incident when she said she was sexually assaulted by Depp as he performed what he called a "cavity search" on her during a drug-fueled night in California.

Through most of Heard's testimony Wednesday, Depp stared down at the table in front of him avoiding eye contact..

Outside of the courtroom, crowds of mostly Depp supporters lined up early Wednesday and again Thursday, in hopes of being allowed inside for the testimony. The court allows 100 people inside for the trial. Many who FOX 5 spoke outside the courtroom said they were longtime fans of Depp and his movie career. Many seemed to side with Depp at this point in the case.

The libel lawsuit was filed by Depp against Heard over an op-ed piece Heard wrote in The Washington Post in 2018 in which Heard refers to herself as a "public figure representing domestic abuse." The Post article doesn't mention Depp by name, but he says it clearly refers to her allegation that she suffered physical abuse at his hands. Depp denies the allegation. 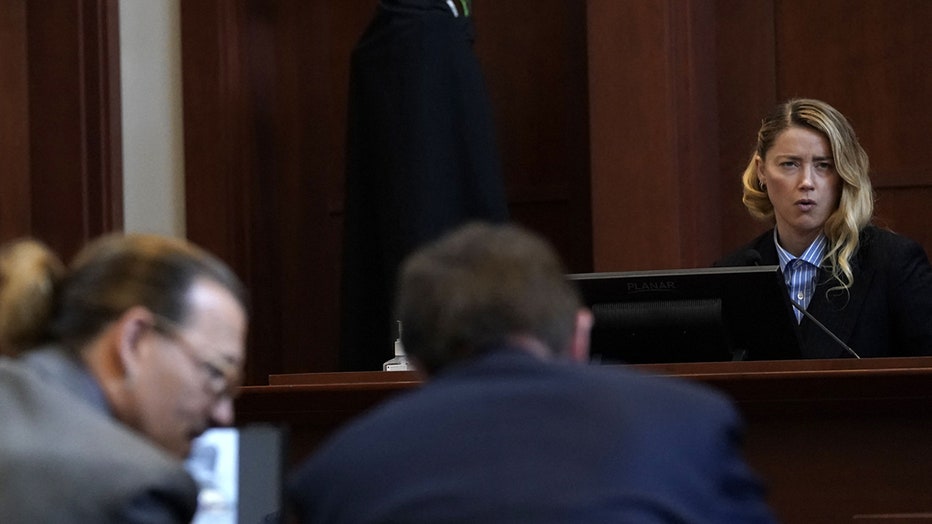 Prior to her testimony, Heard abruptly fired her public relations team after she was reportedly angered over negative headlines about the trial.

On Tuesday, a psychologist testified that Heard suffered post-traumatic stress disorder from violence, including sexual violence, she suffered at the hands of Depp. The psychologist, Dawn Hughes, told jurors that there is corroboration of many of the instances of abuse -- including apologies and admissions made by Depp to Heard. Hughes is the first witness to take the stand on Heard's behalf in the four-week trial after Depp rested his case earlier in the day.

Earlier this week , Depp's agent testified that Heard's op-ed piece in The Washington Post describing herself as a victim of domestic abuse was "catastrophic" to his career. Agent Jack Whigham said Depp lost a $23 million deal for a "Pirates of the Caribbean" sequel following Heard's piece.

The trial opened April 11, and since its start, Depp has testified regarding his past drug use, has discussed suffering a mental breakdown and talked about the disturbing details surrounding his relationship with Heard. Heard's attorneys have highlighted text messages Depp sent to friends recounting alcohol and drug use and have shown photos that showed cocaine and other drugs they say belonged to the actor.

Amber Heard's lawyers asked her about an alleged 2015 altercation that happened between Heard and Johnny Depp in Tokyo, Japan. Heard broke down crying while describing the incident where she claims Depp got physical with her.

A forensic psychologist hired by Depp's legal team testified that Heard suffers from borderline and histrionic personality disorder. The psychologist, Shannon Curry, took the stand saying she reached her diagnosis during 12 hours of interviews with Heard and after a review of her mental-health records. Curry also testified that Heard does not suffer post-traumatic stress disorder from her relationship with Depp. On cross-examination, Heard's lawyers questioned Curry for potential bias.

Jurors have also heard testimony from Tara Roberts, the woman who managed Depp's private island in the Bahamas who testified that she never saw Heard with any kind of bruises.

Los Angeles police officer Melissa Saenz who testified about her visit to Depp's penthouses just days before Heard filed for divorce and sought a restraining order said that Heard had been crying but she saw no evidence of an injury.

Depp's cross-examination concluded after four days on the witness stand.

During his time on the stand, Depp denied ever hitting Heard and accused her of striking him. Depp said Heard threw liquor bottles and paint cans at him during arguments the two had during their relationship. He also denied cutting off his own finger during a fight with Heard, claiming she severed it when she threw a vodka bottle at him.

Amber Heard's lawyers played a recording of Johnny Depp that was allegedly taken by Amber Heard after a fight where she claims Depp hit her in front of people on a plane. Heard claims that the recording was taken while Depp was howling and locked in the plane's bathroom in an effort to help him remember the incident.

Jurors also heard audio clips of Depp berating his then-wife with vulgarities. In other clips, Heard seemingly taunted Depp, suggesting he wouldn't be believed if he were to accuse her of abuse. Jurors were also shown dozens of text messages from Depp to friends regarding drinking, drug use and interactions with Heard.

Throughout the cross-examination, Heard's lawyers focused on Depp's drinking, drug use and heated interactions with her. Depp expressed disapproval and displeasure with many of the questions asked during his four days on the stand.

Earlier in the trial, Depp's older sister, Christi Dembrowski, faced a barrage of questions from Heard's lawyers about Depp's alcohol and drug use. Isaac Baruch, a longtime friend and next-door neighbor of Depp also testified that Amber Heard told him Depp had hit her but he never saw evidence of abuse on her face.

Amber Heard described an incident that happened in Australia in 2015, where she claims Johnny Depp sexually abused her with a bottle during a drug fueled rage. Heard also described the aftermath of the incident where she claimed Depp wrote undecipherable messages across the walls of their rental house in blood.

A former personal assistant to Amber Heard, Kate James, also testified in a video deposition that was played in court saying she never saw the actress suffer any physical abuse at the hands of her then-husband but did say Heard once spit in her face when she asked for a higher salary.

Lawyers also presented a video deposition of Laurel Anderson, a couple's therapist who worked with Heard and Depp in 2015 who said both suffered childhood abuse. As a couple, they were engaged in "mutual abuse," Anderson testified.