2nd arrest made in murder of Duncanville woman

A second person was arrested this week for the murder of a Duncanville woman whose body was found dumped on the side of a road.

DUNCANVILLE, Texas - A second person was arrested this week for the murder of a Duncanville woman whose body was found dumped on the side of a road.

Juanita Rodriguez was reported missing by her ex-boyfriend, but police believe he killed her, with help from his new girlfriend.

The two people Dallas police have arrested for her murder were also reportedly helping her family look for her while she was missing.

"I always looked up to her because she was a strong woman," family friend of Rodriguez, Erika Linares, said.

Linares sat next to a memorial for 54-year-old Rodriguez, who she refers to as an aunt.

"Her items. Her cards. Her things are showing up but she’s not," Linares recalled.

"It’s like, we all kind of go into our detective mode of like, we’re trying to figure out, ‘OK, then why was her car over here? Then why was this, why was that?’" Linares said.

Two days after that, Rodriguez’s body was found wrapped in a plastic tarp on the side of South Ledbetter Drive in Southwest Dallas. Investigators said she was shot in the head.

"So many questions, but I think the main one is, why?" Linares added.

Police arrested her ex-boyfriend, 65-year-old Clinton Jones. The two lived together, even after the break-up. He’s also the one who filed a missing persons report.

"We saw the relationship, at least at our family gatherings, and it was like he loved her. He claimed he loved her," Linares said.

In an arrest affidavit, detectives said Jones matched the description of a man seen on camera exiting Rodriguez’s vehicle near the area her body was found on the day she went missing.

Detectives executed a search warrant at Jones’ home and found clothes matching ones worn by the person seen on surveillance, as well as a 22-revolver pistol.

Jones later admitted to detectives he’s the man in the surveillance photos, but he could not, or would not, explain why he was there. 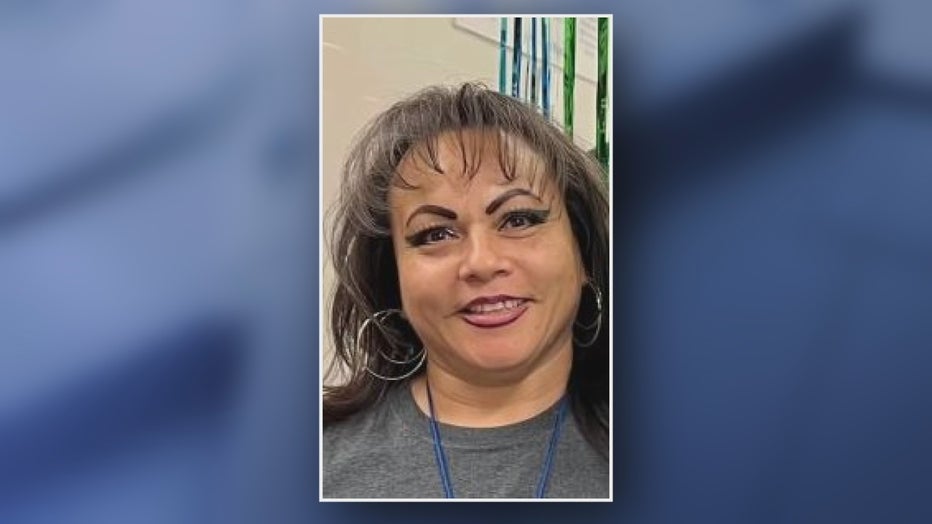 "They say protect yourself from strangers, and sometimes, it’s the people closest to you," Linares said.

Investigators said cell phone data reveals she was with Jones before, during, and after he was near the location Rodriguez’s body was found.

Detectives said she repeatedly lied about her whereabouts, but later admitted they abandoned Rodriguez’ vehicle near an area where one of Rodriguez’s ex-boyfriends lived.

Police believe they were trying to pin the murder on him.

"There’s no remorse to what they did," Linares said.

Linares said both suspects, who are now in a relationship, helped family and friends search for Rodriguez when she was missing.

"[Flores said] you know, that she would keep them in her prayers, that she was a Christian woman and would have her pastor pray for her," Linares recalled. "To still look the family in the eye and offer support, condolences, there’s no remorse."

Rodriguez, who worked as a custodian, was also the mother of two boys.

Police have not specified a motive.

Those who loved Rodriguez want her alleged killers brought to justice.

"It’s always, be careful, be careful who you trust, but honestly, this event just made us realize how scary the world really is," Linares added.