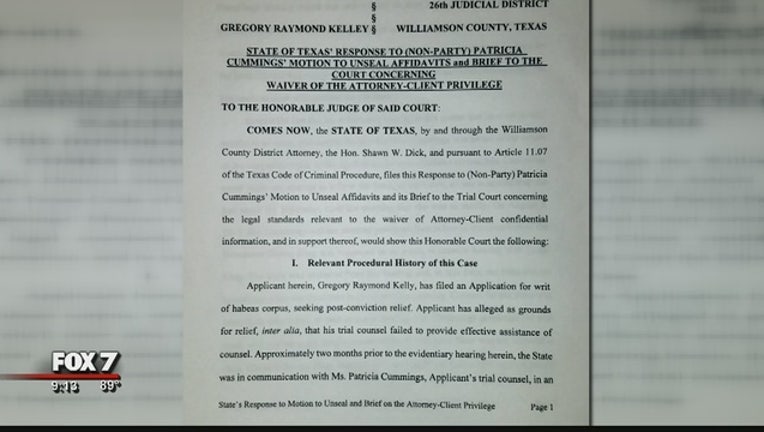 She requested this in a motion after claims were made accusing her of not properly representing Kelley at trial.

Cummings submitted two affidavits to the court which have specific responses to the allegations made. It was the document regarding the conflict of interest claim that was unsealed.

Greg Kelley walked into the courtroom on Tuesday in a white jumpsuit, still being held until his trial is over. In the meantime, he continues to challenge his conviction of two counts of super aggravated sexual assault of a child.

He's raising questions of ineffective assistance by his former defense attorney, Patricia Cummings, who represented him in his 2014 trial.

"The original claims against trial counsel was a failure to object to some very damaging testimony. She lodged no objection. The other claim involved the quality of her investigation of an alternate suspect, namely Johnathan McCarty," said Keith Hampton, Greg Kelley's attorney.

Kelley's attorney Keith Hampton met in chambers with Cummings, ultimately deciding to withdraw those two claims and instead pursue a conflict of interest claim. Many are showing support for Cummings, including Michael Morton, who was wrongfully convicted of the murder of his wife in Williamson County in 1987.

"I've never seen anyone who agonizes over issues of an ethical nature like Patricia does. The fact that someone is saying she was being unethical just doesn't survive the smell test," said Michael Morton, wrongfully convicted.

At the same time, he also supports Kelley.

"My hope for Greg, is that he gets out," said Morton.

In a motion made by Cummings, she states the claims of ineffective assistance should constitute a clear waiver of the attorney-client privilege. But, counsel for the state believe that only applies to matters relevant to the allegations. That's why a judge only unsealed the conflict of interest affidavit.

"The affidavit tracks her testimony at the hearing. It recounts what happened in sequence," said Hampton.

At the moment, Hampton said the judge is reviewing whether the other affidavit should be unsealed. Hampton suggests it be read line by line to make sure it is relevant to any claims. He said there are disparaging opinions that were made by Cummings against Kelley.

"We've got evidence that proves Greg Kelley is innocent, that's what really matters in this, not a lawyer's hurt feelings because she was faulted for not doing certain things during her representation," said Hampton.

A federal district court judge is expected to decide whether to release Kelley on bond this Friday. It would be up to the Texas Court of Criminal Appeals to exonerate him.