Officials in Boulder, CO give an update on the investigation into the shooting that left 10 people dead, including a Boulder police officer.

BOULDER, Colo. - Colorado authorities provided an update Friday on the investigation into the mass shooting this week at a crowded supermarket that left 10 people dead, confirming the shooter had purchased the firearm legally and saying the motive remains unclear.

Boulder Police Chief Maris Herold said the suspect, who used a Ruger AR-556 pistol, legally purchased the firearm from a store near Denver. She added that the 21-year-old, identified as Ahmad Al Aliwi Alissa, was also in possession of a 9 mm handgun but wasn’t believed to have used it during the attack.

Herold said during a press conference that the investigation team walked through the entire crime scene on Thursday, which she called "very complex and obviously very challenging" for all involved.

"Like the rest of the community, we too want to know why," Herold said. "Why that King Soopers? Why Boulder? Why Monday? Unfortunately, at this time we still don’t have answers." 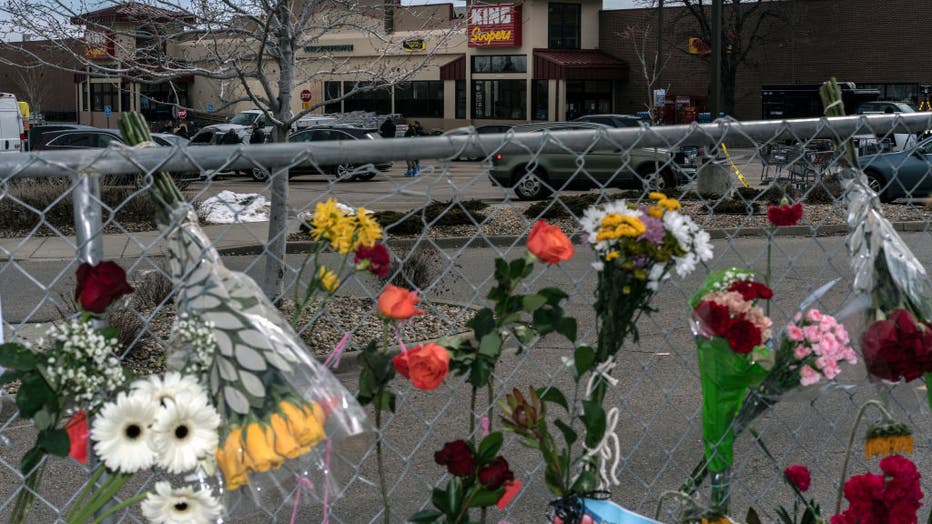 Flowers line a fence at a makeshift memorial for the victims of the shooting at a King Soopers grocery store on March 25, 2021 in Boulder, Colorado. (Photo by Chet Strange/Getty Images)

Also on Thursday, the accused shooter briefly appeared in court. His attorney asked for the mental health evaluation but provided no details about Alissa's mental health.

"Our position is we cannot do anything until we are able to fully assess Mr. Alissa’s mental illness," public defender Kathryn Herold said.

Alissa did not speak except to say "yes" to a question from the judge, who advised him that he is charged with 10 counts of first-degree murder and one count of attempted murder for allegedly shooting at an additional police officer, who was unhurt.

Alissa did not enter a plea, which will come later in the judicial process. He has been jailed without bail.

Boulder County District Attorney Michael Dougherty said Friday that the court next week will announce Alissa’s next hearing date. Dougherty said he anticipated "a lengthy court process" going on for at least a year.

He added that additional charges of attempted murder would be filed in the near future.

The store owner where Alissa bought the gun also confirmed Friday that he passed a background check conducted by the Colorado Bureau of Investigation before purchasing the firearm.

John Mark Eagleton, owner of Eagles Nest Armory in the Denver suburb of Arvada, said in a statement that his store was cooperating with authorities.

The police update comes after roughly 2,000 people gathered Thursday night for a candlelight vigil honoring the victims at King Soopers supermarket. It was held at Fairview High School, a half-mile from the scene of the shooting, and emphasized remembrance and healing.

The crowd said aloud the names of those slain this week in Boulder after one resident read the names of the eight people killed in a mass shooting in Georgia just days earlier. 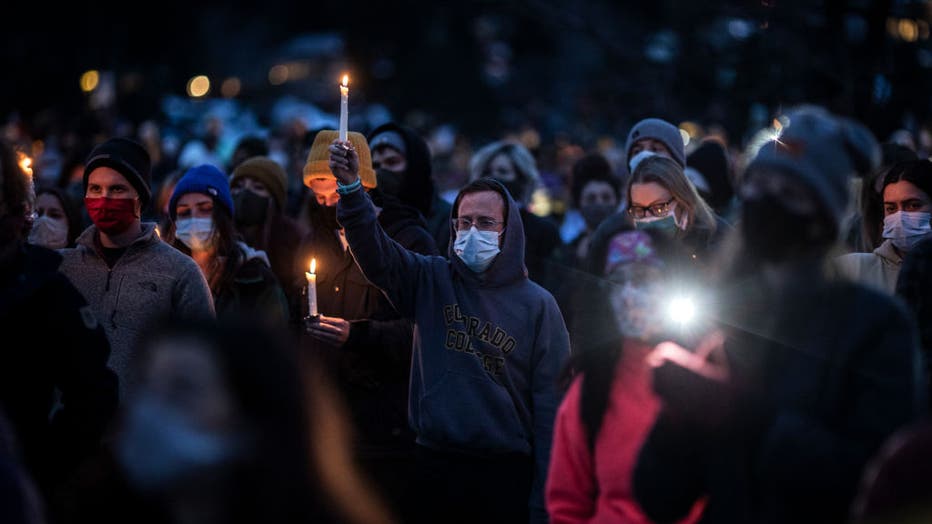 Many held candles and roses while locking arms or embracing each other near the base of the snow-covered Rocky Mountain foothills. After a singer led the crowd in "Amazing Grace," Nicole LiaBraaten, a local leader of the gun-control group Moms Demand Action, asked people to "take a healing breath."

"Our hearts are broken, and our festering wounds are split open once again. And this time it’s for the whole world to see," said Liabraaten, whose group helped organize the vigil.

Democratic U.S. Rep. Joe Neguse, whose district includes Boulder, told the crowd no words could describe how he felt when he heard about the shooting.

"Ten lives. Ten precious lives lost too soon and remembered by so many," he said.

What happened at the Boulder King Soopers shooting?

The shooting unfolded the afternoon of Monday, March 22 at a crowded King Soopers supermarket in southern Boulder. The attack stunned a state and a nation that has recently grieved multiple mass killings.

Hundreds of police officers from throughout the Denver metropolitan area responded to the attack. SWAT officers carrying ballistic shields slowly approached the store as others quickly escorted frightened people away from the building, some of its windows shattered. Customers and employees fled through a back loading dock to safety. Others took refuge in nearby shops.

Police engaged in a shootout with the suspect inside the supermarket, which is when an officer who responded to the scene was killed — later identified as 51-year-old Eric Talley. His funeral was set for next Tuesday.

Officers later escorted a shirtless man in handcuffs, blood running down his leg, from the store during the siege. Authorities would not say at the time if he was the suspect.

Who were the victims of the Boulder King Soopers shooting?

Authorities shared the names of nine other victims after previously identifying Talley, the Boulder police officer who was killed.

Leiker, Olds and Stong worked at the supermarket, a former co-worker said.

The family of Rikki Olds, a 25-year-old who was killed in the Boulder mass shooting, held a press conference on March 24, 2021, to share their memories of a life cut short.

Mahoney’s daughter, Erika, called her father a "hero" and said he represented "all things love."

"I'm so thankful he could walk me down the aisle last summer," she wrote on Twitter with an image of the two on her wedding day. "I love you forever Dad. You are always with me."

Talley had been with Boulder police since 2010. He was the first to arrive after responding to a call about shots fired and someone carrying a rifle, officials said.

"He was by all accounts one of the outstanding officers of the Boulder Police Department, and his life was cut too short," Boulder County District Attorney Michael Dougherty said during a press conference.

Who is the suspect in the King Soopers shooting?

A day after the shooting, police identified the 21-year-old from Arvada, Colorado, as the suspect in the mass shooting. Officials said he was born in Syria but had lived most of his life in the U.S.

Investigators don’t know yet why the suspect opened fire inside the grocery store. Dougherty said the investigation is in the early stages but that detectives believed he was the only shooter.

The arrest affidavit said the suspect bought a Ruger AR-556 pistol on March 16 that resembles an AR-15 rifle with a slightly shorter stock. After the shooting, detectives went to Alissa’s home and found his sister-in-law, who told them that he had been playing around with a weapon she thought looked like a "machine gun" about two days earlier, according to an arrest affidavit.

The local gun store owner who confirmed Alissa passed a background check before buying the firearm said in a statement: "We are absolutely shocked by what happened and our hearts are broken for the victims and families that are left behind. Ensuring every sale that occurs at our shop is lawful, has always been and will always remain the highest priority for our business."

The statement added: "Regarding the firearm in question, a background check of the purchaser was conducted as required by Colorado law and approval for the sale was provided by the Colorado Bureau of Investigation. We have and will continue to fully cooperate with law enforcement as their investigation continues."

Alissa was convicted in 2018 of misdemeanor assault after he knocked a fellow high school student to the floor, climbed on top of him and punched him in the head several times, according to police documents. He was sentenced to probation and community service.

What was the response to the Boulder King Soopers shooting?

Matthew Kirsch, the acting U.S. attorney for Colorado, pledged that "the full weight of federal law enforcement" will support the investigation. He said investigators from the Bureau of Alcohol, Tobacco, Firearms and Explosives were at the crime scene, along with FBI agents.

Colorado Gov. Jared Polis, meanwhile, said in a statement that "Today we saw the face of evil. I am grieving with my community and all Coloradans."

The King Soopers chain said in a statement that it was offering prayers and support "to our associates, customers, and the first responders who so bravely responded to this tragic situation."

"Less than a week after the horrific murders of eight people and the assault on the AAPI community in Georgia, while the flag was still flying half staff for the tragedy, another American city has been scarred by gun violence and the resulting trauma," he said.

He called Talley an American hero. "When the moment to act came, Officer Talley didn’t hesitate in his duty, making the ultimate sacrifice in his effort to save lives. That’s the definition of an American hero."

Biden also called on the Senate to "immediately pass" the two House-passed bills that he said close loopholes in the background check system. Biden also called for a ban on assault weapons.

"I don’t need to wait another minute, let alone an hour, to take common-sense steps to save lives in the future," he said.

Facebook said in a statement to FOX Television Stations that it has designated the shooting as a mass shooting on its Dangerous Individuals and Organizations policy, which means Facebook will continue to remove content that praises, supports or represents the shooting or the identified suspect.

Facebook will also remove any additional accounts belonging to the suspect or accounts created by others in his name if found on their services.

This story was reported from Cincinnati. Megan Ziegler and the Associated Press contributed.