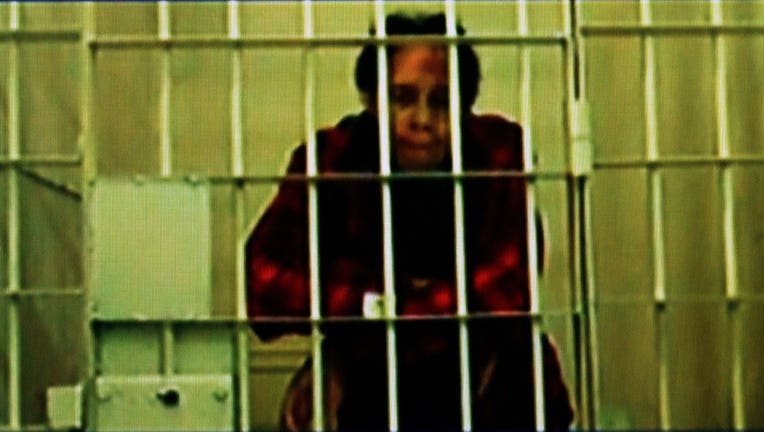 TOPSHOT - US basketball player Brittney Griner, who was sentenced to nine years in a Russian penal colony in August for drug smuggling, is seen on a screen via a video link from a remand prison before a court hearing to consider an appeal against her (Photo by KIRILL KUDRYAVTSEV/AFP via Getty Images)

MOSCOW - The Kremlin on Wednesday kept the door open for talks on a possible swap involving jailed U.S. basketball star Brittney Griner but reiterated that any such discussions must be kept strictly confidential.

A Russian court on Tuesday rejected Griner’s appeal against her nine-year prison sentence for drug possession. The eight-time all-star center with the WNBA’s Phoenix Mercury and a two-time Olympic gold medalist was convicted Aug. 4 after police said they found vape canisters containing cannabis oil in her luggage at Moscow’s Sheremetyevo Airport.

Asked if Griner could be freed as part of a prisoners swap with Washington, Kremlin spokesman Dmitry Peskov said in a conference call with reporters that "we always say that any contacts about possible exchanges can only be conducted in silence under a tight lid on any information."

Griner’s arrest in February came at a time of heightened tensions between Moscow and Washington, just days before Russia sent troops into Ukraine. At the time, Griner was returning to play for a Russian team during the WNBA’s offseason.

President Joe Biden told reporters that his administration is in "constant contact" with Russian authorities on Griner and other Americans who are detained there. While there has not been progress on bringing her back to the U.S., Biden said, "We’re not stopping."

At her trial, Griner admitted to having the canisters in her luggage but testified she packed them inadvertently in her haste to make her flight and had no criminal intent. Her defense team presented written statements saying she had been prescribed cannabis to treat chronic pain.

Before her conviction, the U.S. State Department declared Griner to be "wrongfully detained" — a charge that Russia has sharply rejected.

In July, U.S. Secretary of State Antony Blinken said in an unusual step that Washington had made a "substantial proposal" to Moscow get Griner home, along with Paul Whelan, an American serving a 16-year sentence in Russia for espionage.

He didn’t elaborate, but The Associated Press and other news organizations have reported that Washington has offered to exchange Griner and Whelan for Viktor Bout, a Russian arms dealer who is serving a 25-year sentence in the U.S. and once earned the nickname the "merchant of death."

WNBA star Brittney Griner tried to call her wife nearly a dozen times through the American embassy in Russia on the couple’s fourth anniversary on June 18, but they never connected since the phone line at the embassy was not staffed, Cherelle Griner said.

WNBA star Brittney Griner was detained at an airport in February after Russian authorities said a search of her bag revealed vape cartridges containing traces of cannabis oil.