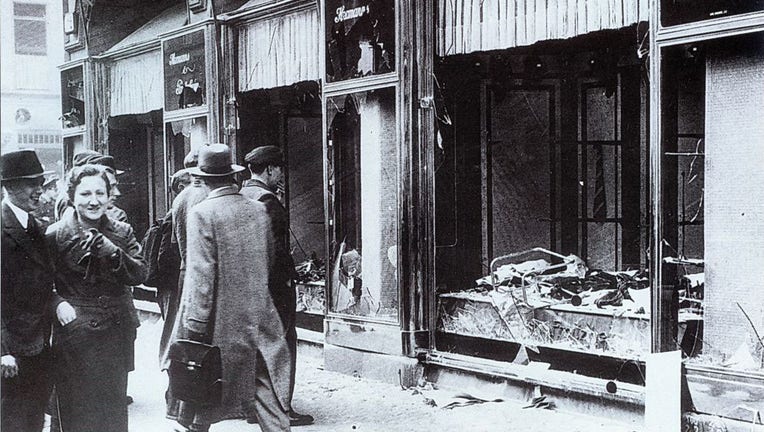 Pedestrians glance at the broken windows of a Jewish-owned shop in Berlin after the attacks of Kristallnacht, November 1938. (Photo by: Ann Ronan Picture Library/Photo12/Universal Images Group via Getty Images)

BERLIN - Holocaust survivors from around the world are warning about the reemergence of antisemitism as they mark the 84th anniversary on Wednesday of Kristallnacht — the "Night of Broken Glass" — when Nazis terrorized Jews throughout Germany and Austria.

In the campaign #ItStartedWithWords by the organization that handles claims on behalf of Jews who suffered under the Nazis, several Holocaust survivors have recounted on video how antisemitic speech led to actions that nearly saw the mass extermination of Jews in Europe in the last century.

Among them is 90-year-old Eva Szepesi, a survivor of the Auschwitz death camp.

"It started for me when I was 8 years old, and I could not understand why my best friends were shouting bad names at me," she said.

Szepesi was shocked at how her best friends could treat her like this, but soon the Jewish girl found herself fleeing from the Nazis before she was captured and deported to Auschwitz at age 12. Her parents and brother were murdered in Auschwitz.

On Nov. 9, 1938, the Nazis, among them many ordinary Germans, killed at least 91 people and vandalized 7,500 Jewish businesses during Kristallnacht pogroms across Germany and Austria. They also burned more than 1,400 synagogues, according to Israel’s Yad Vashem Holocaust memorial.

10th November 1938: Three onlookers at a smashed Jewish shop window in Berlin after the attacks of Kristallnacht. (Photo by Hulton Archive/Getty Images)

Up to 30,000 Jewish men were arrested, many taken to Nazi death camps such as Dachau or Buchenwald. Hundreds more committed suicide or died as a result of the mistreatment in the camps years before the official mass deportations began.

By the end of World War II in 1945, the Nazis and their henchmen had murdered 6 million European Jews.

The #ItStartedWithWords campaign, a relaunch by the New York-based Conference on Jewish Material Claims Against Germany, also referred to as the Claims Conference, is a digital education project in which survivors are reflecting on the moments that led up to the Holocaust. That was a period when they could not have predicted the ease with which their neighbors, teachers, classmates and colleagues would turn on them, transitioning from words of hate to acts of violence.

"Relaunching this campaign goes beyond commemorating Kristallnacht," said Greg Schneider, the Claims Conference’s executive vice president. "With the growing prevalence of Holocaust denial, distortion and hate speech on social platforms, the core message behind the #ItStartedWithWords campaign becomes even more important: The Holocaust did not start with camps, ghettos and deportations; it started with words of hate."

Kanye West has lost endorsement deals as a result of anti-Semitic comments made by the music star, known to most now as Ye." LiveNOW from FOX's Josh Breslow spoke with Pamela Nadell, the director of the Jewish studies department at American University about the impact on the Jewish community.

In Germany, a group tracking antisemitism said it documented more than 2,700 incidents in the country last year, including 63 attacks and six cases of extreme violence.

In a report in June, the Department for Research and Information on Anti-Semitism said anti-Jewish conspiracy narratives related to the coronavirus pandemic and antisemitic criticism of Israel in the Middle East conflict were the main drivers of the 2,738 incidents it documented.

Incidents of bias and hate speech have also been rising in the U.S., including recent comments by the singer Ye, formerly known as Kanye West, and a social media post shared by NBA star Kyrie Irving.